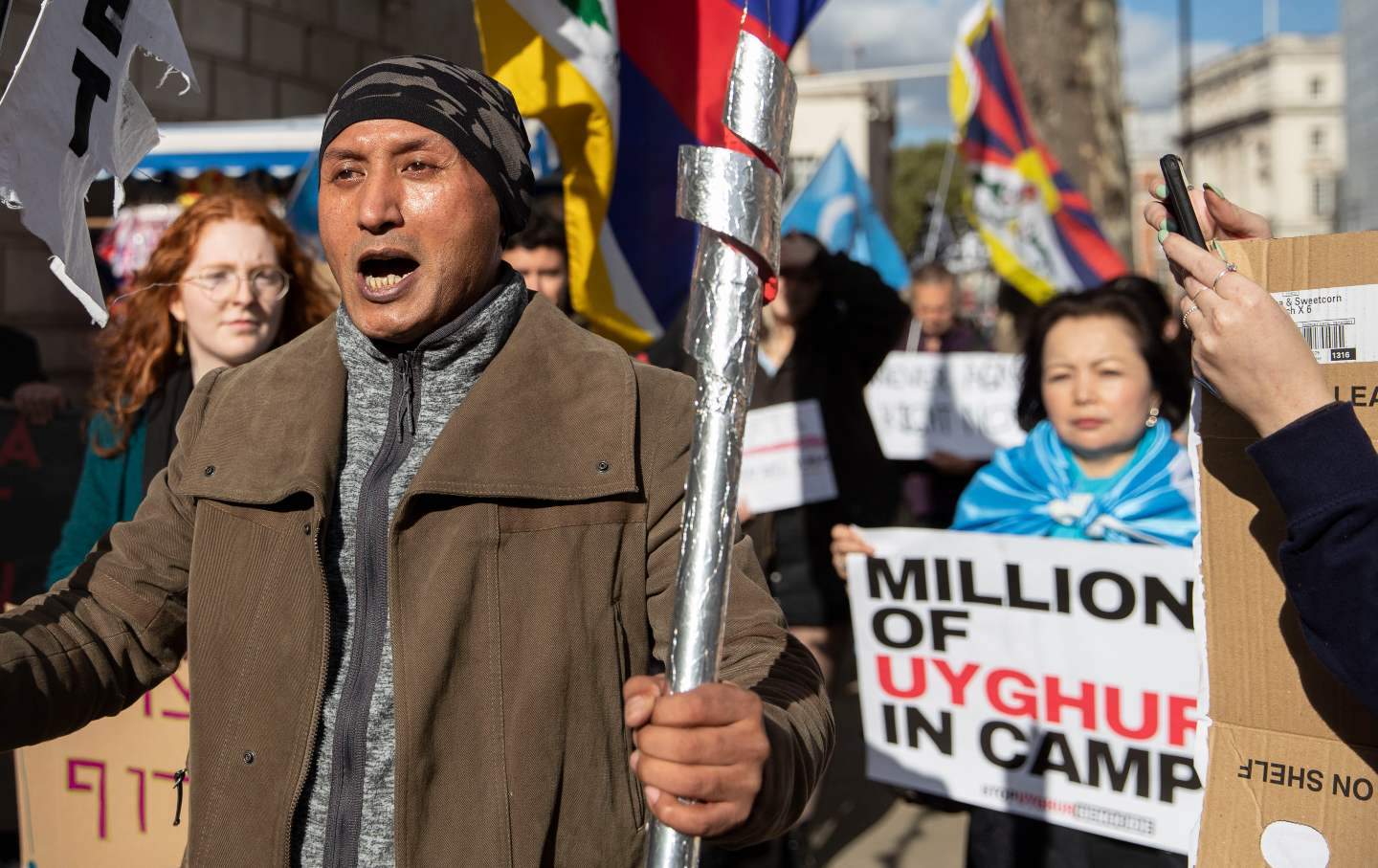 The countdown has begun. We are now 100 days from the start of the 2022 Winter Olympics in Beijing, and pressure against staging the Games in China is mounting around the world. The reasons are myriad: from Tibet, to labor issues, to the treatment of the Uyghur people.

Last week in Athens, activists interrupted the Olympic Flame ceremony—a zany, anachronistic cosplay where women dressed as ancient Olympic maidens solemnly light the flame and send it on its way to the host city—shouting, “How can Beijing be allowed to host the Olympics?” Protesters Chemi Lhamo, Jason Leith, and Fern MacDougal held a “No Genocide Games” banner and a Tibetan flag; they were swiftly apprehended. This followed a demonstration at the Acropolis where activists Tsela Zoksang and Joey Siu unfurled a Tibetan flag and a banner that read “Free Hong Kong Revolution.”

For its part, the International Olympic Committee is doing all it can to maintain its position on the all-time list of organizations that engage in rank hypocrisy. IOC President Thomas Bach dusted off the trusty canard that politics and the Olympics shouldn’t mix, insisting that the Games must be “respected as politically neutral ground.”

This abdication of ethics is especially ridiculous in the context of Beijing, where the International Olympic Committee has long demonstrated craven gullibility. Back in 2001, when Beijing was going for the 2008 Summer Games, bidders vowed that hosting the Olympics would help improve political and human rights in the country. Then-IOC President Jacques Rogge pointed to politics in justifying the decision to hand the Games to Beijing. Of course, this human-rights heyday never arrived.

Teng Biao, the Chinese human-rights lawyer living in exile in the United States, told The Nation, “China’s human rights situation was deteriorating during, and because of the Beijing 2008 Olympics.” Pivoting toward the present moment, he added, “The Beijing 2022 Games are the genocide Olympics. What Beijing is doing is the opposite of human rights, diversity, and dignity mentioned in the Olympic Charter. Everyone and every business should not endorse the genocide Olympics.”

The pressure is mounting. Last week, Enes Kanter of the Boston Celtics added his voice to the mix in a video he released on social media that was meant, as he put it, to “speak out against what is happening in Tibet under the Chinese government’s brutal rule.” He also tweeted, “What is happening to the Uyghurs is one of the WORST human rights abuses in the world today. We can NOT stay silent!”

According to Human Rights Watch, “the Chinese government has committed—and continues to commit—crimes against humanity against the Turkic Muslim population.” Meanwhile, Hong Kong’s democracy is under attack, with union decimation the most recent frontier in a multifront effort to squelch freedom there. Tibet has long been the target of China’s ire: earlier this year Tashi Wangchuk was released from a Chinese prison after serving a five-year sentence for merely telling The New York Times that Tibetan language instruction was being repressed.

While China deserves criticism for its egregious human-rights violations, so does the double-barreled culprit of capitalism and US imperialism. Anthropologist Darren Byler dubs this nexus “terror capitalism,” which he defines as “a type of capitalist frontier-making that exploits the perceived threat of ethnic and racial differences to generate new forms of capital accumulation and state power.” Under such a regime, name-brand capitalist companies are swooping in to profit. Nike is using forced Uyghur labor to make its products. Same for companies like Adidas, H&M, and MUJI, which all source cotton from Xinjiang Province where Uyhgurs and other minorities are living under dystopian surveillance and exploitation, with a lattice of facial-recognition checkpoints and detention centers facilitating high-tech social control and repression.

Since the 1990s, Xinjiang has been concertedly converted into an internal settler colony by China’s Han people who have been emboldened by the national government to appropriate, if legally, Uyghur and Kazakh labor and land. The Chinese government, it should be noted, has justified its attacks on Muslim Uyghurs by borrowing “War on Terrorism” rhetoric from the United States.

This inconvenient truth is noticeably absent from a broadside unleashed last week by two prominent Republicans—Florida Senator Marco Rubio and Christopher Smith, a House member from New Jersey—who slammed the IOC for its unwillingness to relocate the 2022 Winter Olympics. Standing up to China, they argued, “is a moral decision, not a political one, and no exemption exists for the IOC when it comes to responsibility for moral decisions. Moral neutrality is a contradiction in terms.” (This is laughable from Rubio, who spent the last four years as Donald Trump’s lickspittle.)

To be sure, the politicians are part of an alarming zeitgeist of bipartisan brinkmanship that is perilously pressing the United States toward war with China and undermining the possibility of cooperation on the vital issue of climate change. But they are correct that the IOC deserves the blame for handing over the Olympics. The fact that Beijing is hosting the 2022 Winter Olympics throws a spotlight on how the IOC’s so-called moral authority is so easily and willingly leached away to the group’s own economic exigency.

Protests against the upcoming Beijing Games will—and should—continue. But amid the banner waving and finger-pointing, it must be remembered that the sport barons at the IOC deserve the collective ire that only unaccountable oligarchs can provoke. If we are going to build any sort of struggle against the injustices represented by Beijing’s hosting of the Games, it will demand a spotlight on not only the Chinese government but the IOC and the United States as well. You simply cannot build movements on a foundation of rank hypocrisy.