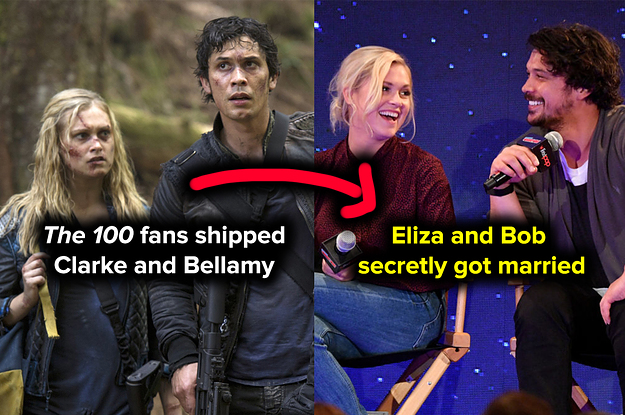 Oftentimes, actors get caught up in the romantic scenes they’re filming and fall in love with their onscreen love interests for real. Other times, however, any love they have for their scene partner evaporates the second the director yells, “Cut!”

Here are 15 pairs of costars who fell in love for real:

Josh Dallas and Ginnifer Goodwin were both freshly out of long-term relationships when they met on the set of Once Upon a Time in 2011, and a year later, they were officially dating.

Goldie Hawn and Kurt Russell met on the set of The One and Only, Genuine, Original Family Band in 1966, but they didn’t start dating until Valentine’s Day in 1983, while they were starring together in Swing Shift.

Nicole Ari Parker and Boris Kodjoe met on the set of the Soul Food TV series in 2000 and started a long-distance relationship after his character was written off.

Rita Wilson and Tom Hanks met when she guest-starred on an episode of Bosom Buddies in 1981, but it wasn’t until they played the romantic leads in Volunteers four years later that they “just looked at each other and — kaboing — that was that,” as he told GQ.

Keri Russell and Matthew Rhys began to play a married couple on The Americans in 2013, and even though romance rumors swirled after she separated from her then-husband, they didn’t start dating publicly until 2014.

Freddie Stroma and Johanna Braddy met while filming the first season of Unreal in 2015, and even though their characters called off their engagement, the actors got engaged for real in 2016.

Eliza Taylor and Bob Morley kept their relationship secret for six years while playing Clarke and Bellamy, who were never an official couple but were a popular pairing to ship, on The 100.

Freddie Prinze Jr. and Sarah Michelle Gellar played a couple in I Know What You Did Last Summer in 1997, but they didn’t start dating until three years later when a planned dinner with a mutual friend who couldn’t make it turned into an impromptu date.

Kirsten Dunst and Jesse Plemons played a married couple on the second season of Fargo in 2015, and they got together after she broke up with her longtime partner a year later.

Penélope Cruz and Javier Bardem met while filming 1992’s Jamón, Jamón, but it wasn’t until they reunited for 2008’s Vicky Cristina Barcelona that they began dating.

In 2011, Emily VanCamp and Josh Bowman met on the set of Revenge, and a year later, they publicly announced their relationship.

Hugh Dancy and Claire Danes met and began dating while filming Evening in 2007.

Melissa Benoist and Chris Wood met when he joined the cast during the second season of Supergirl in 2017, and they started dating soon after.

Danneel Harris and Jensen Ackles had been friends before they were cast opposite each other in 2007’s Ten Inch Hero, and after filming on the sandwich shop movie wrapped, they started dating.

And now, here are 10 pairs of costars who couldn’t stand each other:

In his book American Rhapsody, Sliver screenwriter Joe Eszterhas alleged that Sharon Stone disliked William Baldwin so much that, during an onscreen kiss, she bit his tongue.

Jay Mohr told Elle that his “most awkward interaction with a female celebrity” was “being on the set of a movie where the leading woman was unhappy with my presence and made it clear from day one,” and a few years later, he revealed on his podcast that he’d been talking about Jennifer Aniston, his Picture Perfect costar.

Pierce Brosnan told Vanity Fair that he “let slip a few words which weren’t very nice” to Teri Hatcher on the set of Tomorrow Never Dies because she was “always keeping [him] waiting for hours.”

I Love Trouble costars Julia Roberts and Nick Nolte “gave each other a hard time” from the moment they met, and she told the New York Times he was “completely disgusting.”

Patrick Swayze and Jennifer Grey’s contentious relationship began while they were filming Red Dawn, and when they worked together on Dirty Dancing, he grew frustrated with what he perceived as a difference in maturity.

After they costarred in A Change of Seasons in 1980, Anthony Hopkins said that Shirley MacLaine was “the most obnoxious actor” he’d ever had to work with.

According to costar Louis Gossett Jr.’s autobiography, An Actor and a Gentleman, Debra Winger and Richard Gere kept their distance from each other when they weren’t actively filming a scene during An Officer and a Gentleman.

After they starred in The Boost together, James Woods sued Sean Young for allegedly stalking him and his then-fiancé and leaving a disfigured doll outside his house, but Sean won the suit, and as she told the Daily Beast, “[James] not only paid for [her] legal fees, but [she] had a liability clause in [her homeowners insurance] and … ended up getting paid by them, too.”

After Marlon Brando put his hands on Sophia Loren without her consent on the set of A Countess From Hong Kong, she “turned in all tranquility and blew [in] his face, like a cat stroked the wrong way, and said, ‘Don’t you ever dare to do that again. Never again!’”

And finally, on the set of Kramer vs. Kramer, Dustin Hoffman slapped Meryl Streep across the face and taunted her about the recent death of her first love to elicit a reaction he thought was appropriate for her character, but she refused to stoop to his level, instead focusing on rewrites that made Joanna a richer and more meaningful character.