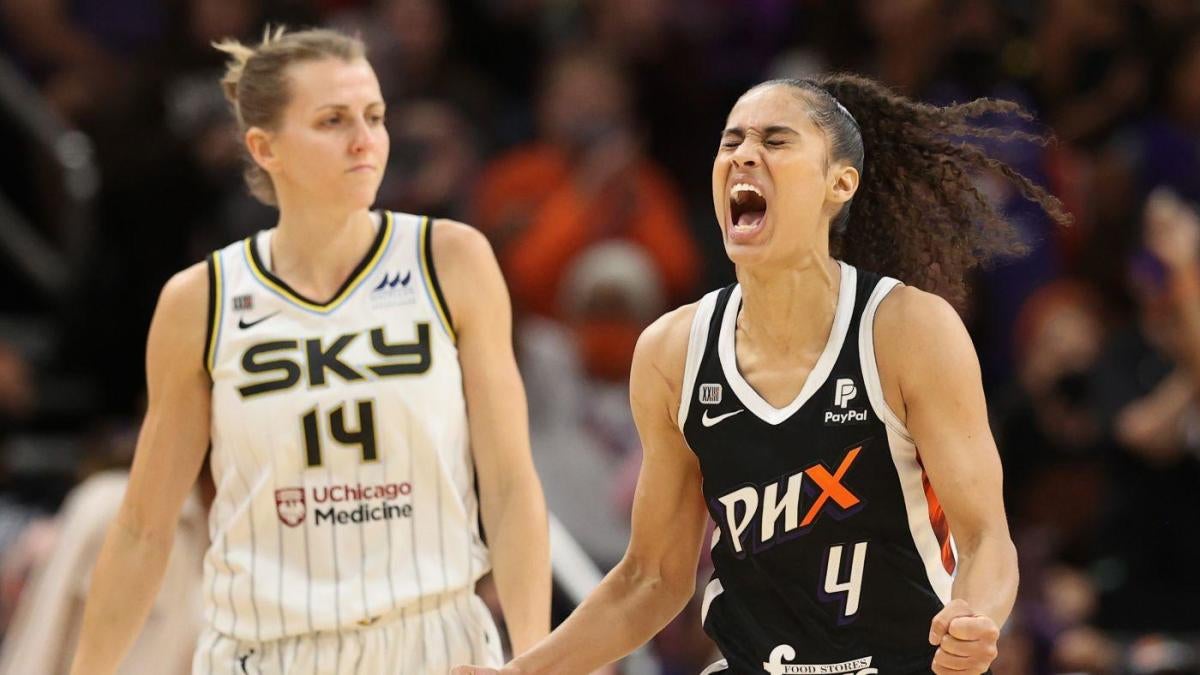 After a bit of a blowout in Game 1, the 2021 WNBA Finals resumed in style on Wednesday night with the type of thriller we’ve come to expect from this postseason. The Phoenix Mercury escaped with a 91-86 overtime win over the Chicago Sky in Game 2 to even the series at 1-1.

Down by four with less than 30 seconds to play in regulation, the Sky came back and tied things up on a tough Courtney Vandersloot layup with 4.4 seconds to play. But in overtime, the Mercury made sure to take care of business, and pulled away late thanks to some big buckets from Diana Taurasi and Skylar Diggins Smith, who combined for all 12 of Phoenix’s points in the extra frame.

But while those two came up clutch late, it was the Brittney Griner show for most of the game. She was tremendous right from the opening tip, throwing down a dunk and scoring the Mercury’s first 10 points to help them stay in the game early. When the final buzzer sounded, she had tied her playoff career-high with 29 points and added nine rebounds and two blocks in 41 minutes.

The Sky will be kicking themselves because they let a nine-point lead slip away. If they could have found a way to finish out this game, they would have taken a commanding 2-0 lead back home. As it is, they’re still in good shape after stealing homecourt advantage in Game 1, and have a chance to close things out in Chicago if they can win Games 3 and 4. Courtney Vandersloot led the way in defeat, finishing with 20 points, 14 assists and five steals in another brilliant performance.

Here are some key takeaways from the game:

In the middle of the first quarter, the Sky had a miscommunication on the defensive end which left Brittney Griner all alone near the basket. Some mistakes you can get away with, but that’s not one of them. Griner took the pass from Shey Peddy and rose up for a dunk that highlighted a red-hot start in which she scored the Mercury’s first 10 points.

By the standards she’s set in the postseason so far, Griner had a somewhat sub-par performance in Game 1, but she was back to her dominant ways on Wednesday night. The Mercury made a point to get her involved early, and that helped set a tone for the whole night.

“And then just being aggressive from the jump,” Griner said. “If it goes in, it goes in, if it doesn’t, it doesn’t. My teammates have all the faith and always talking to me. That was my thing, just go to the rim, get it, but if I don’t, I don’t.”

Most her shots were going in, as Griner went 12 of 19 from the field en route to 29 points, nine rebounds and two blocks. In the process, she tied her playoff career-high.

“We know who our bread and butter is,” Diana Taurasi said. “BG is just playing at a different level right now and there’s really nothing anyone can do. We knew coming into this game it was going to be a big focus. Got to get BG down low early and often. She sustained us for most of the game when offensively we didn’t really have a rhythm, and every time I looked up, she was making big basket after big basket when we weren’t playing well. That’s just what BG does, though. I think we take for granted sometimes how amazing she is.”

Taurasi and Diggins-Smith deliver in OT

For most of the night, neither Diana Taurasi nor Skylar Diggins-Smith could get much going offensively, at least in terms of scoring. At the end of regulation, Taurasi had 12 points on 5 of 12 from the field, while Diggins-Smith was at nine points on 3 of 15 shooting. In some ways, it was a miracle the Mercury even had a chance to win with how they were playing.

But big-time players have a knack for being able to shake off mistakes and misses and stay focused on the next play. That’s exactly what the Mercury’s backcourt did in overtime. Taurasi started the extra frame with a huge four-point play, and later, after the Sky had tied things back up, they made sure there wouldn’t be a second overtime. With just under 90 seconds to play, Taurasi gave the Mercury the lead for good with a 3-pointer, and Diggins-Smith added the dagger with 12 seconds left.

“Yeah, [Taurasi’s] amazing, isn’t she?” Mercury head coach Sandy Brondello said. “Diana does this — regardless what she’s done in the first half, in the fourth quarter, we saw her in Vegas in the fifth game in a lot of big games, in Seattle, in overtime, she is just a player that loves those moments. She’s not — there’s no fear, even when she’s so tired. Obviously making that three late in the game, that gave us a little bit of separation.”

Together, Taurasi and Diggins-Smith combined for all 12 of the Mercury’s points in overtime.

Courtney Vandersloot has put together a number of brilliant performances in the postseason, including setting a new playoff record with 18 assists, recording just the second triple-double in playoff history and scoring 19 points to close out the Sun in the semifinals.

Though the Sky didn’t get the win, her effort in Game 2 is right up there with all of those previous outings. One of her best attributes is that she always seems to be in control. She darts around at her own pace, setting up teammates with exquisite passes and scoring when necessary. Each game she teaches a lesson in pure point guard play, and Wednesday night was a near masterclass.

“I think it’s special,” Sky head coach James Wade said of her performance. “It really is hard for me to focus on individual accomplishments. She’s done a great job.”

Vandersloot, who flipped in an unbelievable leaning layup to tie the game at the end of regulation, finished with 20 points, 14 assists and five steals. She did get a little loose with the ball at times and committed six turnovers, but when you have the ball as much as she does over 41-plus minutes, that’s going to happen.

The only other downside was that Vandersloot was cramping up going into overtime. Chicago will hope there are no lingering effects from her exertion as they return home for Games 3 and 4.