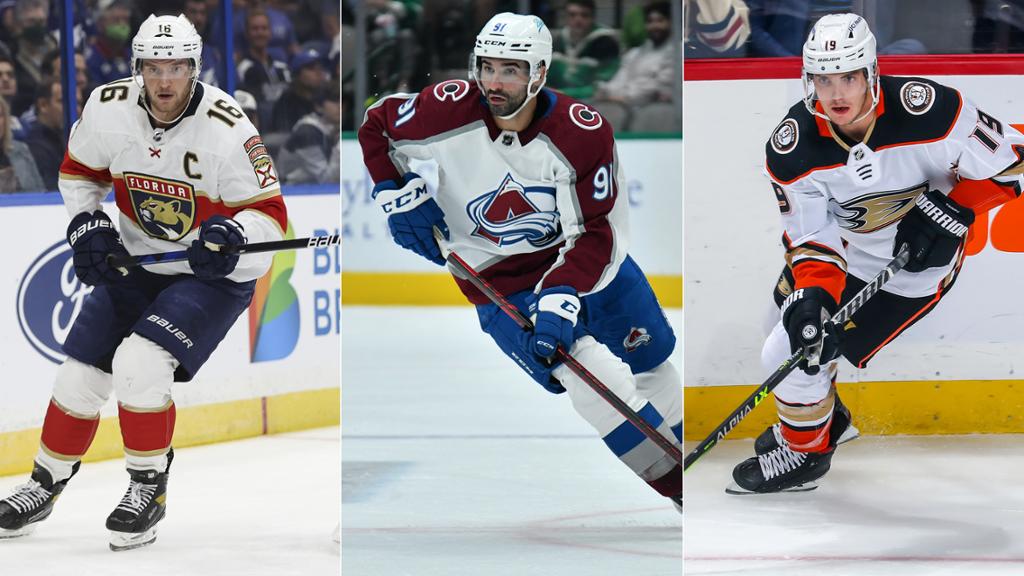 The 2022 NHL All-Star Last Men In vote has begun, with fans deciding which four players of the 32 nominated will be added for 2022 Honda NHL All-Star Weekend in Las Vegas on Feb. 4-5.

One player per division will be selected by the fan vote, which runs through Monday at 11:59 p.m. ET.

Though fans are deciding who will ultimately go to Las Vegas, NHL.com writers are having their say, with 12 writers, three per division, tasked with picking the Last Man In for their division.

Not surprisingly, there were no unanimous picks among the panel. Forwards Nazem Kadri (Colorado Avalanche) of the Central Division and Troy Terry (Anaheim Ducks) of the Pacific Division each received two votes.

Fans can vote at NHL.com/lastmenin, NHL.com/vote or on a mobile interactive ballot on the NHL app.

Here is who the NHL.com writers picked:

Aleksander Barkov, Florida Panthers: The 26-year-old has scored 27 points (15 goals, 12 assists) in 23 games and leads the Panthers in goals despite missing 13 games because of injury. The forward is second on the Panthers in average points-per-game (1.17) behind forward Jonathan Huberdeau (1.31) who was named to the Atlantic Division team Thursday. Barkov’s offensive consistency is reflected in the fact he’s scored at least one point in 19 of his 23 games. Has scored nine points (five goals, four assists) in his past six games. — Mike Zeisberger, staff writer

Lucas Raymond, Detroit Red Wings: The 19-year-old has made hockey fun in Detroit again, scoring 30 points (10 goals, 20 assists) in 38 games to lead all NHL rookies. He’s teamed with defenseman Moritz Seider to showcase where the Red Wings are headed. But Raymond isn’t just a part of the future of the Red Wings, he’s part of the future of the NHL, something that should be celebrated at All-Star Weekend. It would give him a chance to make a splash on the national stage, much like Red Wings captain and 2022 All-Star Dylan Larkin did in 2016, when he made the All-Star Game, also as a 19-year-old rookie. — Amalie Benjamin, staff writer

Steven Stamkos, Tampa Bay Lightning: The 31-year-old center is the sixth-leading scorer in the NHL with 45 points (18 goals, 27 assists) in 38 games. He has 911 points (457 goals, 454 assists) and is second in Lightning history behind Hockey Hall of Famer Martin St. Louis (953). He became the Lightning’s all-time game-winning goals leader last month with 65, surpassing St. Louis (64). Stamkos has been relatively healthy this season and a major contributor as Tampa Bay pursues its third consecutive Stanley Cup championship. — William Douglas, staff writer

Jesper Bratt, New Jersey Devils: The 23-year-old forward leads the Devils in goals (10), points (32), even-strength points (27) and game-winning goals (four) in 34 games. The Devils have controlled 53.9 percent of all shots attempted when Bratt has been on the ice and he’s in the process of having his best NHL season. His NHL career high was 35 points as a rookie in 2017-18. New Jersey center Jack Hughes, who is also going to the All-Star Game, said Bratt is not only one of the team’s most highly skilled players but has been driving the Devils for most of the season. –– Mike G. Morreale, staff writer

Jake Guentzel, Pittsburgh Penguins: The 27-year-old forward has been on a two-month hot streak, scoring 27 points (15 goals, 12 assists) in 19 games since Nov. 13. He has six multipoint games, including a hat trick against the Vancouver Canucks on Dec. 4, in that streak. During the Penguins’ NHL-best 10-game winning streak from Dec. 4 to Jan. 6, he led Pittsburgh with eight goals despite missing five of the 10 games with an upper-body injury. Guentzel has been a key offensive catalyst and leads the Penguins with 35 points (18 goals, 17 assists) in 30 games. — Adam Kimelman, deputy managing editor

Evgeny Kuznetsov, Washington Capitals: Shedding the inconsistency that has plagued him since helping the Capitals win the Stanley Cup in 2018, Kuznetsov has put it all together and is playing perhaps the most complete game of his career. With Nicklas Backstrom (hip) and T.J. Oshie (lower body) sidelined for much of the first half of the season, Kuznetsov and Alex Ovechkin have carried much of the load offensively for Washington. Kuznetsov’s 35 points (12 goals, 23 assists) in 34 games are second on the Capitals behind Ovechkin’s 52 points in 37 games and the 29-year-old center ranks third on Washington in averaging 21:47 in ice time. Being selected to play in the NHL All-Star Game for the second time in his career (2016) would be a just reward. — Tom Gulitti, staff writer

Roman Josi, Nashville Predators: The 31-year-old defenseman leads the Predators and is second in the NHL among defensemen with 38 points (12 goals, 26 assists) in 36 games. Tampa Bay’s Victor Hedman has scored 39 points in 39 games. Josi also leads the Predators in power-play points (20). Josi has been a steady and strong presence for the Predators for years and deserves an appearance at the 2022 All-Star Game. — Tracey Myers, staff writer

Nazem Kadri, Colorado Avalanche: The 31-year-old center leads the Avalanche with 48 points (13 goals, 35 assists) in 30 games, and is fourth in the NHL. He’s been inconsistent in the past but scored at least one point in 25 of 30 games this season, including a 13-game point streak he brings into Friday. – Tim Campbell, staff writer

Nazem Kadri, Colorado Avalanche: Let’s not overthink this. How do you not vote for the player who is fourth in the NHL in scoring? Each of the three players ahead of Kadri in the scoring race has won the Art Ross Trophy as the NHL scoring champion, not to mention the Hart Trophy as the most valuable player. Their names are Leon Draisaitl (53 points), Connor McDavid (53) and Alex Ovechkin (52), and each is going to Vegas, of course. If you look at points per game, Kadri is second in the League at 1.60, barely behind McDavid (1.61). Kadri has put himself in elite company this season. — Nicholas J. Cotsonika, columnist

J.T. Miller, Vancouver Canucks: The 28-year-old forward leads the Canucks with 36 points (11 goals, 25 assists) in 36 games and has been their most valuable and consistent player before and after the coaching change from Travis Green to Bruce Boudreau. The Canucks are 8-2-1 since Boudreau arrived, with Miller scoring better than a point per game (13 points) in those 11 games. Miller has also played more center this season than he did in his previous two with Vancouver, elevating his game while separated from center Elias Pettersson. — Pete Jensen, senior fantasy editor

Troy Terry, Anaheim Ducks: The 24-year-old forward is having a breakout season. He leads Anaheim with 22 goals and 36 points in 38 games. He is sixth in the NHL in goals. Terry had points in 16 straight games from Oct. 18-Nov. 18, helping the Ducks to a strong start (19-13-7) that has led them into second place in the Pacific Division. Terry scored 15 goals and 48 points in 129 games prior to this season. His production has been one of the biggest reasons the Ducks have been one of the NHL’s success stories this season. — Dan Rosen, senior writer

Troy Terry, Anaheim Ducks: In addition to what Dan said, there are other reasons Terry deserves to be voted to the All-Star Team. He’s made the most of his 90 shots, scoring 22 goals. His 24.4 shooting percentage ranks second among players with at least 10 goals behind Marcus Foligno of the Minnesota Wild (29.2). Terry has done it all; he has scored 10 power-play points, five game-winning goals and two overtime goals. His 36 points are more than the Ducks’ point leader had last season (33; Max Comtois) and he is on pace to be Anaheim’s first player to score at least 50 points since the 2017-18 season when forwards Rickard Rakell (69) and Ryan Getzlaf (61) did it. Terry is a big reason why the Ducks are primed to make the Stanley Cup Playoffs for the first time since 2018. — David Satriano, staff writer