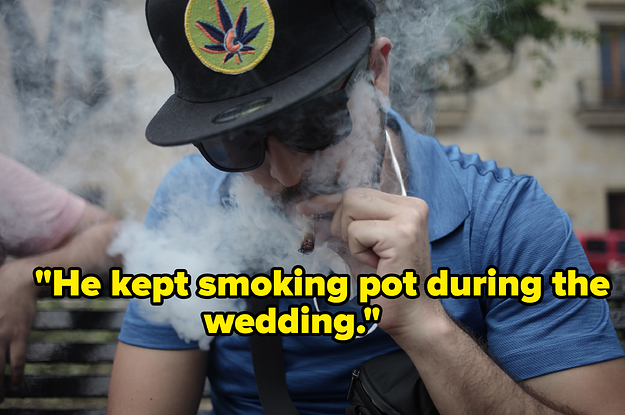 Till death do us part…or the red flags.

Although splitting up is not what anyone wants after tying the knot, sometimes it’s better to get out sooner rather than later.

Check out the shocking stories below.

“My friend got married because she got pregnant. We all tried to talk her out of it, but she was from a conservative family and worried what people would say.”

“She showed up late to her own wedding, and it was just obvious she wasn’t into it. Most awkward wedding ever. They lasted a year. He took everything (savings account, house, etc.) and has paid her jack in child support all these years.”

“When, the day before, I called my friend saying this is a bad idea. When I was about to sign the paperwork to get married in the courthouse and knew it was the wrong decision.”

“So I got married to my boyfriend after five years of dating and living together… He had just quit his job and needed medical benefits. So I took on two jobs to support us and help put him through school to get his marketing degree…”

“Needless to say, no more than three months into it, we linked our iClouds under a family one to save money andddddd started getting texts from a 21-year-old girl (we are in our 30s) to meet up with him before and after classes. Welp, I kicked him out because of course not on my dime…only to find out I was pregnant. Moral of the story. If you’re not ready, don’t do it…”

“For me it was the day before the wedding, when he yelled and got angry at me for trying to help him with the cake that wasn’t going to plan.”

“My dad took a photo of me just before I stepped into the room to get married, and he said he knew from my face in that moment, where I thought nobody was looking, that I didn’t want to do it: My expression told him everything.”

“He didn’t do his speech at the reception — he stood up and just couldn’t say a word. He told me at the time he was just too nervous, but has since said he just couldn’t get that expression out of his head, and couldn’t do a speech congratulating us when he knew I was afraid, not joyous. I knew before I married my now-ex that it was wrong and just felt so trapped I had no idea how to get out.”

“A friend of mine’s first marriage started with the groom at the altar high on LSD (yeah, it was the ’70s), and that marriage lasted about a year.”

“Knew when I walked down the aisle it was probably a mistake. Confirmed nine months later when I made spaghetti for dinner five nights in a row and he didn’t notice.”

“A restraining order, a few court dates, and a lovely divorce settlement later…BUH-BYE.”

“I have a friend who was a virgin when she got married; her new husband loved that she was innocent and chaste. As soon as they were married and starting having sex, he resented how much she enjoyed it, and took every opportunity to belittle her and call her awful slurs.”

“They were divorced before a year was up, and she went on to have a very healthy sex life despite the damage his bullshittery caused.”

“A friend of mine was engaged to a real shitbag, and we alllll told her not to marry him but she did… Before the wedding, he lived with his parents (not that there is anything wrong with that), and after the wedding he tried to get her to move into his room at parents’ house with him.”

“My first stepmother — a truly nice person — had somehow convinced herself that Dad would stop being a workaholic after they married. Eight months later, she realiezd she may have been a little too optimistic about changing his work habits.”

“So, they had a proper chat. They ended up accepting their marriage wasn’t working.

(My second stepmother handles Dad’s work addiction so much better than my mum and first stepmother did. I think her way of communicating is how she’s managed to break through my dad’s thick skull. So he’s improving all the time. She’s great.)”

“I knew it wasn’t going to last when he kept sneaking away to smoke pot in the forest near our outdoor wedding venue.”

“Probably my earliest ‘oh shit’ moment was three months after the wedding at the holidays. His folks came to see our lovely new house.”

“He took his brother and father to see the edge of the property line near the driveway (which had a bit of a hill down toward a little creek). I was on the front porch telling his mother how much I loved our new home when he starts BELLOWING MY NAME. Some of our trash had gotten carried in the wind from our dumpster at the curb, and was caught in the reeds at the bottom of the hill. He started cussing at me and telling me to pick up the effing trash, because it was my fault that I hadn’t secured the dumpster lid (which, BTW, did NOT fasten — anywhere, as far as I know). He was angrily belittling me as a ‘stupid cow’ as I stood shocked next to the dumpster, confused — and he snatched up the plastic bag that had gotten away — and FLUNG IT AT ME. I was furious and went into the house. We reconciled, but I wish we hadn’t. I wish I’d left him right then. Oh well — hindsight, huh?!”

“I knew the night before, when he started a huge argument thinking I was cheating because I didn’t answer my cell while I was getting my nails done and a massage with my friends as a bachelorette gift.”

“Was best friends with him for eight years, one day we just declared feelings that developed after a particularly close few days. Great relationship, lived together, etc. Naturally decided to get married. Literally that night it was almost like he was a stranger, but I let it slide, and we carried on for a few months with a few bumps in the road.”

“Then he sold my games consoles and games to buy alcohol. I was mad, but he was begging forgiveness.

A few nights later, he crashed my evening in with my best friend and promptly passed out drunk on the floor. I realized that wanting to kick your husband’s head from rage was not normal. Last straw was finding a palm-shaped bruise on my disabled toddler’s wrist that was way way too big to be mine. So we got out of there that day.”

“Left my ex shortly after we bought a condo. I was painting, and he was hungover.”

“Not me, but a coworker dated a guy for years before marrying him. About three weeks into the marriage, he comes to her and very calmly explains that he had a girlfriend and is going to start spending Tuesday and Thursday nights with her.”

“When my coworker obviously says she is not OK with any of this, his family started harassing her. His mom would call her and say, ‘(The girlfriend) is a part of our family. I can’t believe you’re trying to keep her from us.’ It was SO WEIRD. Like she unwittingly married into a polygamist situation and was just expected to be OK with it. She was able to get an annulment.”

“I didn’t quite get to the altar — luckily. I had an argument with my ex over something and nothing, which I thought was sorted. Later that afternoon, as I was walking to my job, he tried to run me over.”

“The day we got home from our week-long honeymoon, we were in bed exhausted, and he passed out first. But his phone was lying in bed and kept lighting up, and I saw it was his ex liking our Facebook pics from the trip.”

“I knew it was a mistake when he screamed at me for holding in a coughing fit caused by a sinus infection that he had given me (he never took the medication to fix it).”

“Oh, and I had a fractured rib at the time I didn’t know about. It killed me to cough, let alone hold it in. Went to the bathroom at the airport to cry and cough.

Three months into our marriage he was cheating on me, and I left.”

“When getting dressed for her wedding, my friend was asked if she was excited about her honeymoon. She rolled her eyes and ‘ughed’ about having to sit next to him on the plane for five hours.”

“When my ex’s mother was diagnosed with cancer, I asked him, ‘Would you take care of me if I had cancer?’ His reply was no.”

Do you have more stories of wedded wackiness to share? Let us know in the comments!

If you ever feel unsafe in your marriage, call the National Domestic Violence Hotline at 1-800-799-SAFE (7233) or visit thehotline.org.

Note: Some answers have been edited for length and/or clarity.