3 Biggest Matchups for Raiders in Wild Card Game vs. Bengals 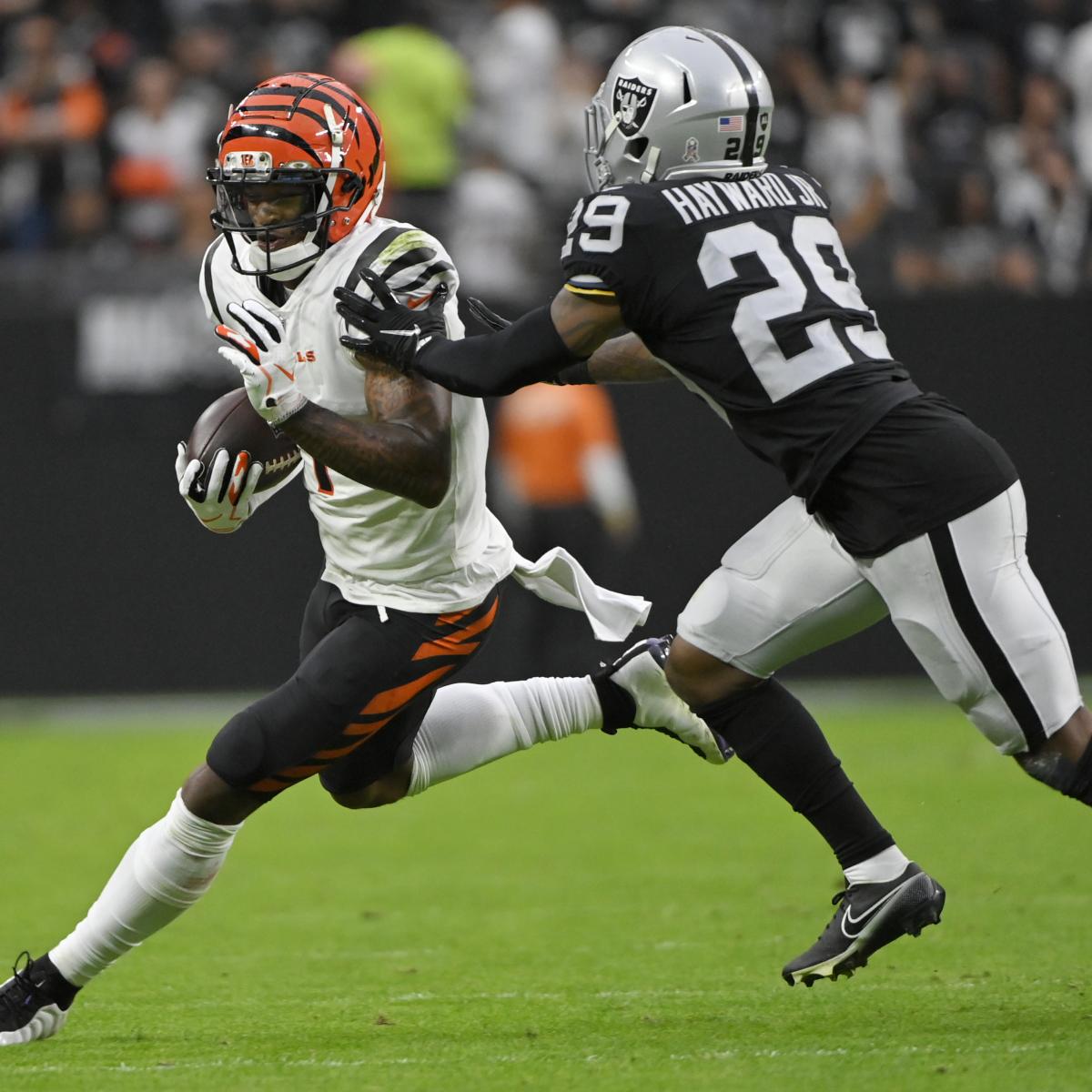 The AFC’s No. 5 seed faces the shortest turnaround of any playoff participant. The Raiders wrapped up their postseason berth on Sunday night and will be back on the field on Saturday afternoon to face the Cincinnati Bengals.

Las Vegas’ regular-season matchup with the Bengals gives it a slight advantage when it comes to game preparations, but it is still a tough assignment.

Cincinnati’s offense looked fantastic in Weeks 16 and 17, and Joe Burrow and Ja’Marr Chase pose the biggest threat to Las Vegas’ time inside the postseason.

The AFC West side can counter the output of Cincinnati’s stars with its terrific pass rush and with an offensive star of its own.

Darren Waller did not do much in his return to the gridiron in Week 18, but he could be poised for a big performance that helps Derek Carr in the quarterback’s first playoff appearance.

Las Vegas needs to contain Ja’Marr Chase to have a chance of winning in Cincinnati.

The 21-year-old produced 391 receiving yards and three touchdowns in his last two full appearances in Weeks 16 and 17. He made a brief appearance in the Week 18 loss to the Cleveland Browns.

Chase and Joe Burrow hit their stride when the AFC North winner needed it most, and the rookie wide receiver should carry a ton of confidence into Saturday’s game.

The 2021 first-round pick did not do much against the Raiders in Week 11, though. He had three catches on six targets for 32 yards and a touchdown.

Chase’s production was cut because Joe Mixon had so much success in the ground game, running for 123 yards and two touchdowns.

The Bengals’ No. 1 wide receiver has the potential to put up high totals to create separation early on in the contest. Cincinnati could use an early score or two to ease whatever playoff nerves its core of young players may have.

The Raiders need to contain Chase’s production to slow down the connection between him and Burrow. That starts with limiting his output in the first quarter.

An early long pass hookup between Burrow and Chase could put the Raiders at a disadvantage and would also get the home crowd more involved.

The Raiders need to slow down Chase to potentially force some stops, make the crowd a non-factor and set up Derek Carr for a scoring drive or two to put all the pressure on the home side.

Las Vegas must use its biggest defensive strength to neutralize the Burrow-Chase connection.

Cincinnati has had trouble keeping its quarterback upright over the last few weeks. The Raiders produced three sacks against the second-year signal-caller in Week 11. That total is on the low end compared to outputs from other defenses that faced the Bengals.

Burrow was sacked by the Los Angeles Chargers on six occasions in Week 13, and the San Francisco 49ers got to him five times in Week 14.

Cincinnati conceded 10 sacks in the 25-year-old’s last three appearances, and the Kansas City Chiefs took him down four times in Week 17.

Maxx Crosby and Co. need to make Burrow feel uncomfortable from the first snap on Saturday. The pressure will at least threaten to take Chase’s big-play potential out of the contest.

The Raiders must find a good balance of pressure against the former LSU quarterback and containment at the line of scrimmage against Mixon. Las Vegas could get burned by the rushing attack if it focuses too much on putting Burrow on the ground with sacks or quarterback hits.

As long as they make Burrow feel uncomfortable in the pocket, the Raiders will have a chance to pull off the road win.

Raiders tight end Darren Waller thrived in the middle of the field in Week 11. He caught seven of his eight targets for 116 yards in the 32-13 loss to the Bengals.

The 29-year-old did not contribute much in his Week 18 return. He caught two passes for 22 yards, but he was targeted on nine occasions.

The target rate suggests Derek Carr is more than willing to go right to the tight end despite his five-week injury absence.

Saturday’s matchup should favor Waller, though. Cincinnati gave up the most receiving yards to opposing tight ends of any playoff participant.

Waller had success against two of the four teams with worst concessions to TEs than the Bengals. He had 105 yards and a touchdown versus the Baltimore Ravens and caught a touchdown pass in his first meeting with the Chargers.

Travis Kelce and Mark Andrews both scored a touchdown against the Bengals in the last two appearances from their first-team defense.

Andrews did more damage with 125 yards on eight catches. Kelce had five receptions for 25 yards, but he still made an impact in the end zone.

Those numbers should provide hope for the passing attack that the Carr-Waller connection could hurt the Bengals secondary and help the Raiders keep pace if a high-scoring contest breaks out.