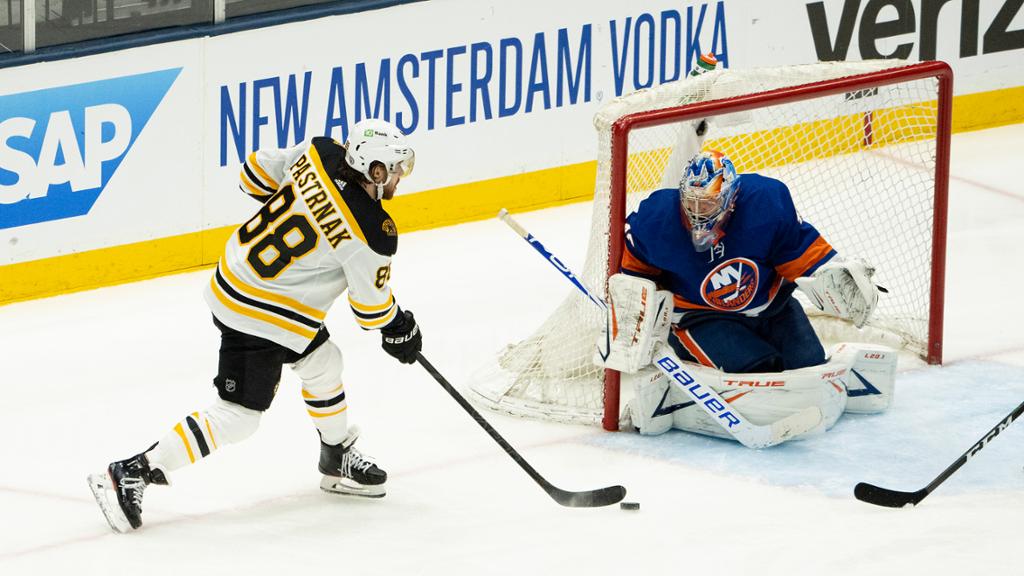 Brandon Carlo has an undisclosed injury and the defenseman will be unavailable for the Boston Bruins when they play the New York Islanders in Game 4 of the Stanley Cup Second Round at Nassau Coliseum on Saturday.

Carlo was injured during the third period of Boston’s 2-1 overtime win in Game 3 on Thursday following a hit from Islanders forward Cal Clutterbuck. Carlo has not scored a point in eight games during the Stanley Cup Playoffs but is second on the Bruins in average time on ice per game (22:30), behind defenseman Charlie McAvoy (27:06). Carlo will be replaced by defenseman Jarred Tinordi, who has not played since Game 5 of the first round against the Washington Capitals on May 23.

“He was on the bike today, so he was feeling better,” Boston coach Bruce Cassidy said of Carlo. “We’ll list him as day to day until he gets on the ice. Obviously he’s not going to be able to play or be in the lineup, so when that happens, as usual, that’s a step closer. We’ll see how he does, but out tonight. We’ll see if he gets on the ice tomorrow.”

Islanders goalie Semyon Varlamov made 39 saves Thursday, but the Bruins scored on their second shot on goal when forward Craig Smith gave them a 1-0 lead at 5:52 of the first period. Varlamov has allowed a goal on one of the first three shots he’s faced in each of his four starts during the postseason, a trend that likely needs to change if New York is going to tie the series.

“I’d like to not be chasing the game,” Islanders coach Barry Trotz said. “But I’m not that concerned. Over my time, things that you think are trends aren’t really trends, they just happen in a short timeframe. If it’s the same again, then I’ll start wavering the other way.

“I think for the most part ‘Varly’ has been terrific. … I’m not concerned at all. He’s a veteran guy.”

2. Second line dominates at even strength

The Bruins’ second line of Smith, Taylor Hall and David Krejci was dominant at even strength in Game 3, combining for two points (one goal, one assist), nine shots on goal and consistently keeping the Islanders out of the offensive zone.

Cassidy said it’s important they carry that momentum into Game 4.

“I think getting through the neutral zone was key for them,” Cassidy said. “They had some real good rush chances. The goal they scored was a great backchecking effort by Taylor to get the puck going the other way, made a good look.

” … They were able to generate off the rush well. I think that’s [Krejci’s] game in general. Taylor Hall has certainly shown that for us. They can also get it down if they have to chip and chase, so I think what was probably under-appreciated for them was how well they played defensively. They didn’t give up very much at all.”

It took a third whack at a loose puck in the crease during the third period of Game 3 for Islanders center Mathew Barzal to score his first goal of the playoffs. It was further evidence of how New York must generate more shots from the blue line and create traffic in front against Boston goalie Tuukka Rask, who made 28 saves in Game 3, including five in overtime.

“That’s pretty much the game plan against any goalie, traffic and lots of commotion there, something that gives them trouble,” Islanders defenseman Adam Pelech said. “That’s something we’re going to continue to try to do from the back end, deliver pucks, and the forwards are doing a good job of getting traffic there. It’s just finishing off some of those rebounds.”

Miller, a defenseman, is skating in Boston. “We’ll see how close he is (Sunday),” Cassidy said. … Wahlstrom, a forward, will miss his fifth straight game. He and Dal Colle, also a forward, are day to day. Trotz said Wahlstrom potentially could play in this series.