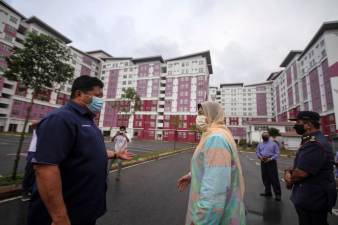 JOHOR BAHRU: A total of 500 squatter families in Taman Sinaran Kempas, here, will breathe a sigh of relief when they receive houses under the Melana Indah People’s Housing Project (PPR) within three months.

Housing and Local Government Minister, Datuk Zuraida Kamaruddin (pix, centre) who announced this, said the decision was made to ease the burden and solve the problem that have plagued the residents in the housing area for more than 20 years, including the issue of public facilities and amenities.

“Considering that PPR Melana Indah has just been completed, the number of houses here is about 1,450 units, so we will give 500 units of these to the squatters in Taman Sinaran Kempas and they have agreed to move here.

“Earlier, I met with the community in Taman Sinaran Kempas to offer these PPR houses to them to live here,“ she told reporters after visiting the PPR Melana Indah in Taman Perling, here, today.

She said the Johor state government was expected to hold further discussions soon with the Taman Sinaran Kempas community committee to identify a mechanism for the community to obtain the PPR units.

“My ministry has handed over the PPR Melana Indah to the state government, with the mechanism including whether these (500 units) should be owned, rented with a view to own (rent-to-own) or rented. I asked the state government to give priority to the residents of Taman Sinaran Kempas, with the seniors to be given the lower floors,” she said.

For the record, Taman Sinaran Kempas is a temporary residential area for the squatter settlement that previously existed in the vicinity of the Keretapi Tanah Melayu Berhad (KTMB) Kempas railway station and tracks.

It is understood that the residents were previously instructed to move to the housing area temporarily while waiting for a permanent housing area to be provided.

Meanwhile, Zuraida said the government had approved an allocation of RM5 million for development projects around Pasir Gudang involving works to repair the public facilities and infrastructure for the food stalls, hawker sites and also the landslide spot in Kampung Sentosa Barat.

She said Taman Bukit Layang-Layang in Pasir Gudang, here, which also housed the Kite Museum, would be upgraded as a federal park like the Bukit Kiara Federal Park in Kuala Lumpur, in tandem with the government’s aim for a ‘one state, one federal park’ concept.- Bernama