6 Ways to Exercise Outdoors in Winter 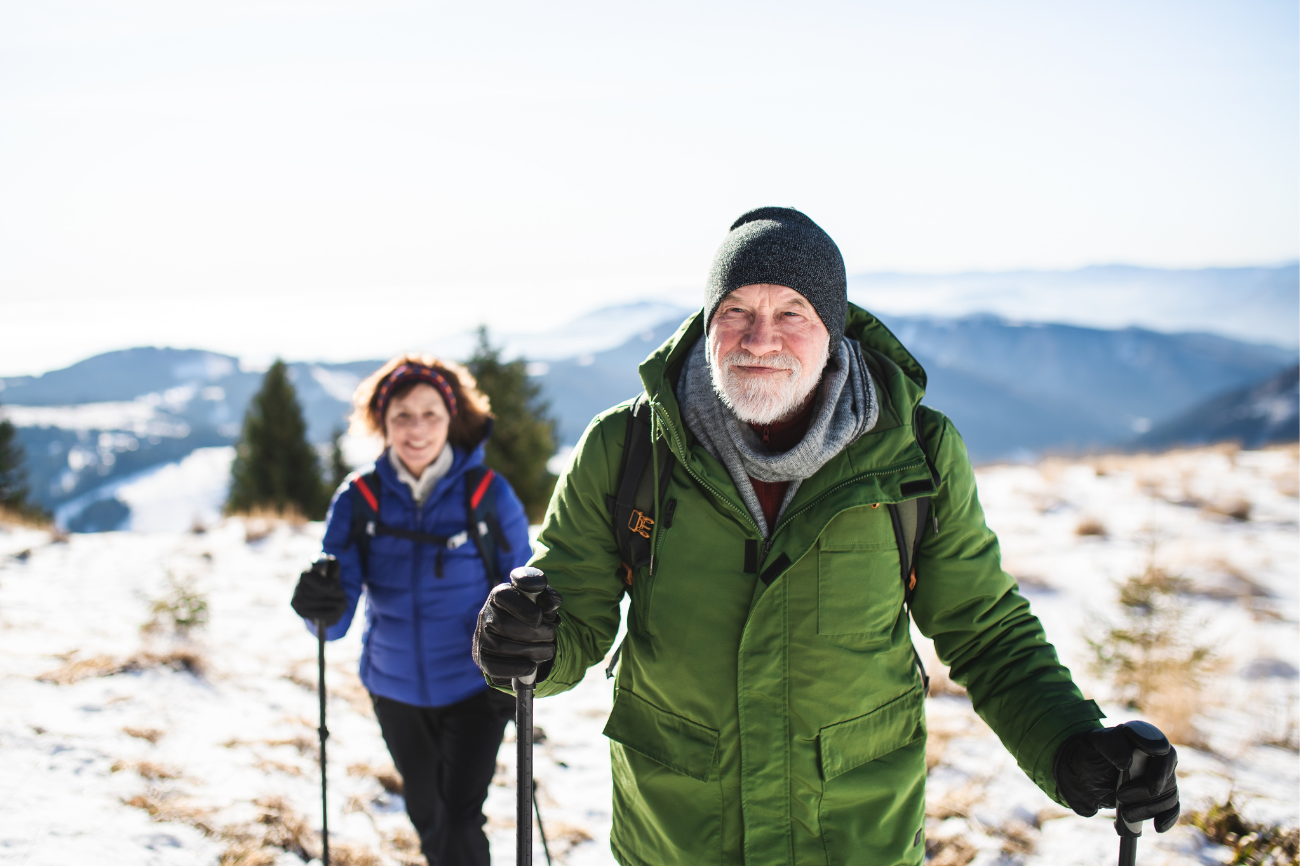 With its shorter days and colder temperatures, exercising outdoors during winter takes more planning. But if you can get past that initial cold blast, there’s lots to enjoy.

“I think exercising outside, as uncomfortable as it may seem, is fantastic,” says Tamanna Singh, a sports cardiologist with the Cleveland Clinic who exercises outdoors year-round. “You’re breathing fresh air and get to be with nature.”

Working out in cold weather improves cardiac function, boosts the immune system, lifts the mood and builds endurance in terms of overcoming the cold.

“The benefits of exercising outside cannot be overstated,” adds Patrick Doherty, a neurosurgeon and assistant clinical professor of neurosurgery at Yale School of Medicine. It also burns more calories than in milder weather, which is particularly important during this relatively sedentary time of year, he says.

Read more: Is 30 Minutes of Exercise a Day Enough?

But beware! When working out in chilly temperatures, “you don’t feel you’re working out as hard; you’re not sweating as much,” says Alexis Coslick, assistant professor of physical medicine and rehabilitation at the Johns Hopkins University School of Medicine. “You may not feel you’re getting dehydrated. You may not realize you have the same amount of caloric output and expenditure when it’s not as hot out.”

Whether you’re trying to stay in shape or get fit, doctors say you can do it safely – and pleasantly – as long as you prepare for the weather’s conditions and listen to your body. Below, these doctors offer tips for exercising safely in winter.

Start with a moisture-wicking layer of polyester that will absorb sweat and keep it off your skin. Follow this with a layer for warmth, like wool. Then select an outer layer that’s waterproof enough to repel rain, snow and wind.

Since wind chill can make 30 degrees Fahrenheit feel like 20 or 15 degrees, check what meteorologists are saying about the “feels like” temps — factoring for that biting wind, Coslick says. And keep your skin covered to prevent frostbite if it’s really cold, she adds.

No matter what, you lose most heat through your head, hands and feet, so keep these covered at the start of the workout. Once you’re warmed up and feeling hot, however, feel free to safely shed layers so long as you’re mindful of the temperatures, Coslick says.

Prevent slips and falls by wearing the right footwear for conditions, Doherty says. Snow boots are best for walking short distances, but hiking boots are better for hiking in the snow.

Most accidents happen when people are wearing the wrong footwear for the conditions, Doherty continues: “I can’t tell you the [number of] people who slip and fall wearing high heels walking to the car, or slippers to get the mail.”

Be sure your sneakers or hiking boots have good grip, and consider adding clamp-on spikes or buying specialized winter running shoes with added traction. And “make sure you’re working out somewhere where you can still get good traction,” Coslick says, whether it’s pavement that’s been plowed and sanded or a frozen, grassy field.

Read more: Why Walking Might Be One of the Best Exercises For Health

Drink about 8 ounces of water before exercising — and after 15 minutes, drink more water, Doherty says. Though you don’t feel as thirsty in the cold, he explains, if you’re “wearing multiple layers, you can dehydrate just as easily in the winter as you can in the summer.”

And from Coslick, an added note for the caffeine addicts: Drinking coffee is a diuretic, so don’t substitute it for water. Additionally, don’t forget to eat something that contains protein before exercising. Your body needs fuel!

4. Stretch before and after.

Whether you’re going out to shovel the walkway or for a day of skiing, it’s essential to warm up and stretch before and after exercise.

But stretching is even more essential when its cold out, doctors say; this is because the cold constricts blood vessels to help maintain your core body temperature. Warming up helps get that blood flowing.

Coslick recommends starting with dynamic stretching, such as arm swings and circles, leg swings, and jumping jacks. If your muscles are still cold, you’re at greater risk of injury year-round, she says.

Static stretches of your hamstrings, quads, back and torso before and after exercise are important too, Doherty adds. “The warm-down is much more important when it’s cold. Those muscles are very tight; the cold contracts the muscles, and people often go into muscle spasms after exercise,” he says.

You may not realize it, but your body is working harder in the cold. Take breaks and listen to your body if you’re feeling fatigued, winded, sore, dizzy or if your heart is racing, Doherty says.

When you hear yourself saying, ‘This is my last ski run for the day,’ or ‘I’m just going to finish up the last few feet of this driveway,’ Doherty says to reconsider. Why? That’s when people tend to get injured, he says, when they push themselves too far.

“If you’re not physically fit, stop exercising if you feel lightheaded or nauseous,” Singh says. If you’re trying to live up to that New Year’s resolution to exercise, start small and build your fitness gradually. Even if you’ve been working out regularly indoors, Singh says, at first you may not be able to exercise at the same intensity outdoors in the cold.

And be mindful of those telltale signs of chest pain and shortness of breath, especially if you’re a man who is at least 50 years old, or a woman at least 60, she continues. While no one is immune to cardiac issues, the people who have heart attacks while shoveling snow tend to live more sedentary lives.

If that sounds like you, only do a little at a time, take breaks and heed warning signs.

6. When exercising in the dark…

If you’re exercising in daylight with exposed skin, don’t forget the sunscreen. Snow reflects sunlight much like sand. (And maybe the sunscreen’s scent will remind you of summer.)

Of course, daylight can be pretty hard to come by during the winter months. So, after the sun goes down, increase your safety by wearing a headlight and reflective clothing, Coslick says — making sure it’s reflective in both the front and the back.

“The biggest concern is light,” she says. “Can you see the ground? Can cars and other people see you?” Keep in mind that it’s also harder to see black ice in the dark, so avoid any and all patches that look wet.

Citizen scientists report global rapid reductions in the visibility of stars from 2011 to 2022 | Science
Liquid Meal Replacements: Can We Move Beyond Food?