7 Things We’ve Learned About the 2020 Elections 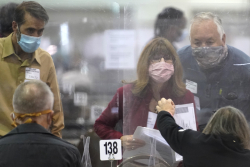 The 2020 election in the United States, however, remains one of the least transparent, inclusive, and accountable contests in our nation’s history.  And unfortunately, due to prevailing political headwinds, it will likely remain so because election officials are refusing to be held accountable and answer basic, reasonable questions.

Instead, those responsible for managing our elections, along with their allies, are responding with a narrative that questions are bad and the election system is beyond reproach.

It is this response that is undermining faith in our democratic institutions, not the questions. Worse yet, many public officials are threatening sanctions and prosecution against those who reasonably challenge the lawlessness with which some elections were managed.

As a nation, it is now time to discuss whether the unprecedented management of the 2020 election reflects wise policy moving forward.

The Amistad Project is doing its part and has engaged in litigation in several states to bring transparency to unprecedented practices in our last national election. The following are some of our initial findings:

A bedrock of American democracy is equal protection under the law, and that government in an election provide for equal treatment of all voters.  In 2020 it did not.  And it appears now that few are interested in it doing so in the future.

This situation is the fruit of decades of policy and intellectual neglect. We have nationalized every issue, and national leaders have responded by claiming to be able to fix every problem facing every American citizen. They pass a vaguely worded law and push authority over to the vast administrative state while ignoring the application of that law and avoiding accountability for the law.

This separation of political power from political accountability is now so embedded in our republic that we have generally accepted an unelected, unaccountable bureaucracy telling us when we can visit loved ones in the hospital, celebrate a marriage, gather over the holidays, or engage in political rallies.

These extraordinary powers are legislative ones delegated to the executive branch, and the same legislators who complain about how the executive branch uses these powers can take them back.  Most have not done so, however, because casting blame is politically safer than leading.

Our nation’s COVID response and election management have underscored two major cracks in our political foundation – we have separated authority from accountability, and we have concentrated power in unaccountable institutions.

As for election management, the Constitution vests state legislators with the responsibility to handle this task. Yet, most state legislatures do not even meet during the election season and do not review the performance of the election process.

Rather, they delegated that authority to executive branch officials who perform what are known as ministerial functions, thus preventing state legislatures from exercising their own discretion.  Meanwhile, these officials have signed contracts with a machine and software vendors who are generally beyond scrutiny in how they impact elections.

So much for accountability, transparency, and inclusion.

And now, when some state legislatures decide to do their job and learn what happened in the 2020 election, these vendors, talking heads, and many public officials cry foul.  Why?  Because they have decided that partisan politics are more important than good government.

This occurs on the left and the right.  Many on the left decried the lack of transparency in modern elections prior to the 2020 election, but not now that they’ve won. And many on the right improperly claim definitive proof of fraud in 2020 instead of recognizing that all investigations and reviews of government performance begin with questions, not conclusions.

The result is a form of nuclear warfare, where both sides engage in the mutual assured destruction by dropping accusatory sound-bite bombs hoping to cancel each other.  Meanwhile, responsive government dies.

Phill Kline is the former Kansas attorney general. He is now a law school professor and director of The Amistad Project.