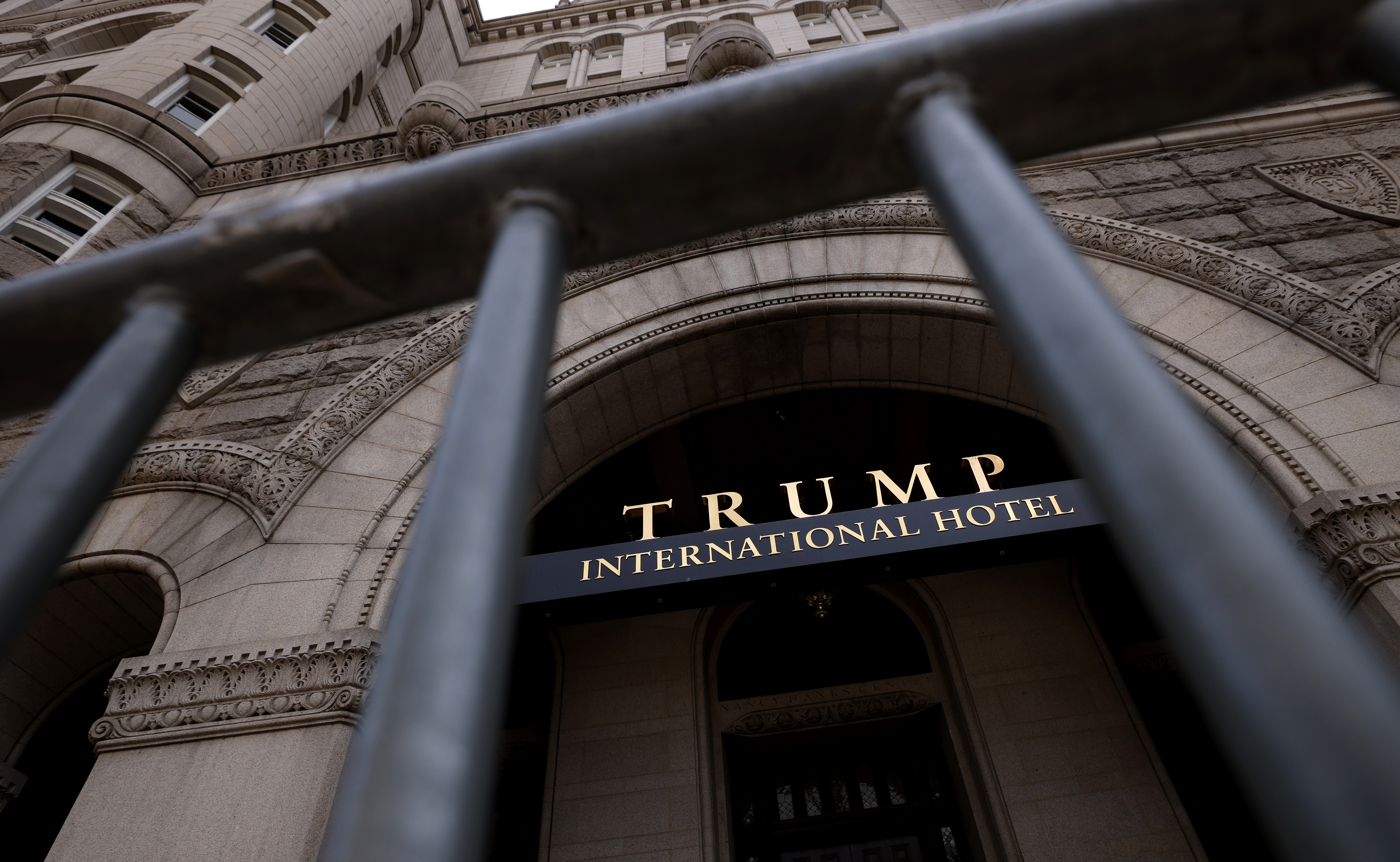 The Trump International Hotel in Washington D.C., a gaudy monument to presidential corruption and misgovernment, is about to be sold by the former president to new buyers. The Wall Street Journal reported earlier this week that the Trump Organization is in “advanced discussions” to sell the 60-year lease on the government-owned property to a Miami-based investment firm less than a decade after acquiring it. Donald Trump’s once-prized acquisition was five years old and is survived by the corrosive effect it had on American anti-corruption efforts.

The hotel’s cause of death was the COVID-19 pandemic, which had a devastating impact on the hospitality industry in general, as well as the end of Donald Trump’s presidency. According to Trump’s last financial disclosure report in 2020, revenue at the D.C. hotel alone had plunged by 62 percent that year. Those losses compounded earlier shortfalls: A House Oversight report earlier this week revealed that the hotel had accrued more than $73 million in losses between 2016 and 2020.

When Trump struck a deal with the federal government for the property in 2013, it looked like a lucrative venture. The 260-room hotel sat within the historic Old Post Office building on Pennsylvania Avenue, roughly one-third of the way between the White House and the Capitol building. Guests would be merely steps away from a variety of museums and landmarks on the National Mall. Ironically, it also sat adjacent to the Justice Department’s main headquarters and across the street from the FBI building.

But trouble began almost immediately after Trump mounted his presidential bid. His company planned to open two restaurants in the building led by renowned chefs José Andrés and Geoffrey Zakarian. But both men withdrew from their respective projects with Trump after he launched his campaign with racist comments about Mexicans in the summer of 2015. Despite the business’s prime location and decent accommodations, it apparently struggled to attract a broad assortment of guests during Trump’s divisive presidency.

That did not deter everyone from staying away. For many in Trumpworld, the hotel was a place to see and be seen—a bizarro Camelot where Republican lawmakers, conservative elites, and MAGA enthusiasts could cross paths, mingle, and hobnob the night away. On some evenings, Trump himself would grace the hotel with his presence like Louis XVI greeting his courtiers at Versailles, settling in for a well-done steak at Table 76. It was as close as Trump came to friendly territory in the nation’s capital; he only ate at one other restaurant in D.C. during his entire presidency.

Some of the guests of Trump’s hotel checked in with a different sort of baggage. Trump’s inaugural committee, which raised funds through private donations, pushed cash into his hotel in 2017 at such high rates that some planners raised concerns that the Trump Organization was overcharging them. Lobbyists of all stripes bought rooms and dined at restaurants while seeking favor before the man who effectively served as landlord and tenant of the government-owned property for four years. Some weren’t even subtle about it. While seeking regulatory approval for a merger with Sprint in 2018, T-Mobile executives frequently stayed at Trump’s hotel while in town, with one making ten separate visits, according to The Washington Post. John Legere, the company’s CEO, reportedly stayed at least four times and was regularly spotted wearing T-Mobile-branded gear in its well-traveled lobby.

Perhaps the most controversial guests, however, were those who came in from overseas. When the hotel opened in September 2016, it hired a “director of diplomatic sales” to handle the anticipated influx of diplomats and foreign officials that would stay at the hotel. Given D.C.’s small geographic size and massive global stature, the city’s major hotels are accustomed to hosting a wide range of international guests. But Trump’s hotel had a habit of drawing millions in dollars in business from countries that also sought favor with the Trump administration itself: the governments of Kuwait, Saudi Arabia, Malaysia, the Philippines, and other foreign powers spent tens of thousands of dollars on lodging at the hotel during Trump’s presidency. The Trump Organization insisted it complied with the Constitution’s Foreign Emoluments Clause by transferring any profits from foreign sources to the Treasury.

That voluntary compliance did not ameliorate all of the ethical problems that came with the president owning a hotel in the nation’s capital. Trump’s predecessors typically took steps to divest any business holdings and avoid the appearance of corruption or impropriety. Jimmy Carter famously sold his peanut farm to meet post-Watergate expectations of good governance. Though many of the early presidents owned large plantations, which were troubling in different ways, the practical limits of nineteenth-century commerce made them poor vehicles for corrupt transactions. Trump, however, refused to sell his stake in his family business or place his assets in a blind trust as president, and in doing so, opened the door to unprecedented cash-for-influence schemes.

In theory, the Constitution forbids these sorts of schemes with foreign nationals and governments. But the Foreign Emoluments Clause is not self-enforcing, and the courts generally declined to find that anyone had standing to bring a lawsuit against Trump for breaching it. Multiple lawsuits, including some brought by members of Congress, were thrown out by federal courts in recent years on procedural grounds. Legislation that would create mechanisms to enforce the clause does not appear to be imminent. My 2018 proposal to avoid future corruption traps by nationalizing any president-owned businesses, including the Trump Organization at the time, has yet to garner any support on Capitol Hill.

Trump’s D.C. hotel is also survived by his other properties, which also became channels for people to swap large sums of money for access and influence over the previous four years. Trump briefly floated his resort in Doral, Florida, as a possible site for a G-7 summit, effectively turning a major diplomatic event for world leaders into a free ad for his properties. Former Vice President Mike Pence went out of his way to stay at Trump’s Doonbeg resort in Ireland, ostensibly because it was well-equipped to handle his entourage. (Dublin apparently doesn’t have hotels.) And Mar-a-Lago, Trump’s current residence and the site of his post-presidential court-in-exile, doubled its membership fee to $200,000 almost immediately after he took office.

What made Trump’s D.C. hotel truly unique, however, was the sheer blatancy of the grift. Thanks to the havoc wreaked upon federal anti-corruption laws by the Supreme Court over the last 15 years, corruption is an almost pedestrian habit in modern American politics. The Supreme Court, in its infinite majesty, allows rich and poor Americans alike to donate millions of dollars to super PACs, to shower elected officials with lavish gifts while seeking favors, and to enjoy a stream of benefits from politicians unimpeded by federal prosecutors. But the Trump International Hotel in D.C. was more flamboyant, more undeniable, and, in some ways, more transparent about the health of American democracy than any FEC filing could ever be. In that sense—and that sense alone—it will be sorely missed.