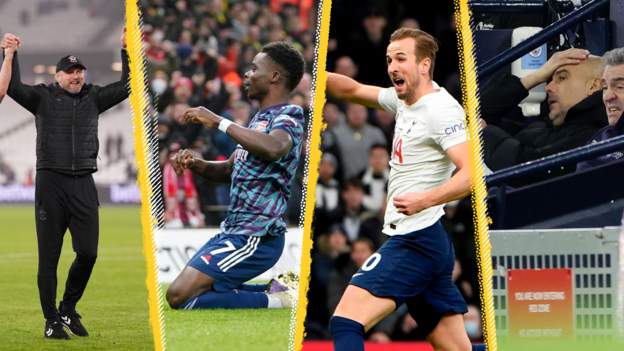 Every year the 1963 Boxing Day results get plastered all over social media but maybe next year the 2021 scores will join them.

There were 26 goals in Sunday’s first five matches, an average of 5.2 per game.

This year could be hindered by the lack of games – with three called off because of Covid – but Manchester City’s 6-3 win was one for the ages.

The sixth and final game of the day – Brighton’s 2-0 win over Brentford – put a dent in the goals per game average (dropping to 4.7), but it is still the highest on 26 December since that 1963 goal feast.

“It was a roller-coaster, so a typical Boxing Day game with a lot of goals,” said Manchester City boss Pep Guardiola.

That game was particularly remarkable, with Manchester City going 4-0 up within 25 minutes. Just 12 days ago they beat Leeds 7-0 and a repeat looked on the cards.

“The manager warned us at half-time,” said City’s Raheem Sterling – who scored twice. “At 4-0 up you have to kill the game.”

Leicester boss Brendan Rodgers told the BBC: “It was so important not to unravel physically and mentally. At half-time we said to the players can we win the second half?”

They did – and at one stage they threatened to win the match.

Kelechi Iheanacho set up two goals and scored himself in the space of 10 minutes – he had only had 14 touches at that stage – to reduce the deficit to 4-3.

Manchester City went 5-3 up but even then Leicester missed two huge chances to get it to 5-4 before Sterling’s late second.

You might have expected Guardiola to be furious at letting the opposition back into the game, but he said “absolutely not” and “it was a nice game to watch”.

“We’re lucky at the end with set-pieces we scored a fifth and sixth or else there would have been problems to the end,” he said. “I’m not disappointed in my team because the opposition had good actions and good quality. Overall the game was really good.”

It was the highest-scoring Boxing Day game in the top flight since 1991 when Manchester United won 6-3 at neighbours Oldham.

The only other time a Premier League team scored six on Boxing Day was also against Leicester, Arsenal winning 6-1 at Highbury in 2000.

England captain Kane gave Spurs the lead against Palace as they went on to win 3-0. He has scored in all six of his games the day after Christmas, with nine goals in those six games.

Robbie Fowler is the only other player to score as many in the Premier League on Boxing Day, one ahead of Alan Shearer and Robbie Keane.

“We are talking about a top-class striker and a player that for us is very important,” Spurs boss Antonio Conte told BBC Sport. “Today I had the possibility to give him a bit of rest and for him to play only 60 minutes for us was important. Kane is a player it is very difficult to decide to put in a rotation.”

Spurs captain Hugo Lloris, 35, also made some history with a Premier League record seventh birthday appearance. The question is does he get presents two days in a row?

And then there was the biggest win of the day, as revived Arsenal thrashed struggling Norwich 5-0, with Bukayo Saka scoring twice at Carrow Road.

“I have used a tennis terminology in the dressing room to describe our performance – it was littered with unforced errors,” Norwich boss Dean Smith said.

Gunners boss Mikel Arteta said: “It’s a very satisfying result because in this festive period we have to keep performances to a high level.

“We looked really sharp and committed. It’s a big win for us.”

Southampton won a topsy-turvy game at West Ham, with the Hammers twice coming back but eventually losing 3-2.

Saints boss Ralph Hasenhuttl said: “We were nervous about keeping the lead and gave it away two times. But we had the right answers to come back for what is a big win for us.”

After his side’s comeback win over Villa, Chelsea boss Thomas Tuchel complained about having to play continually through the festive period with plenty of Covid problems.

“Europe has a winter break but we play through and put it on the players’ shoulders,” he said. “They make us play all the time even if we have Covid. We have new injuries and it won’t stop. People at the green table, in offices make these decisions.”