A Spoiler-Filled Breakdown of the New Scream 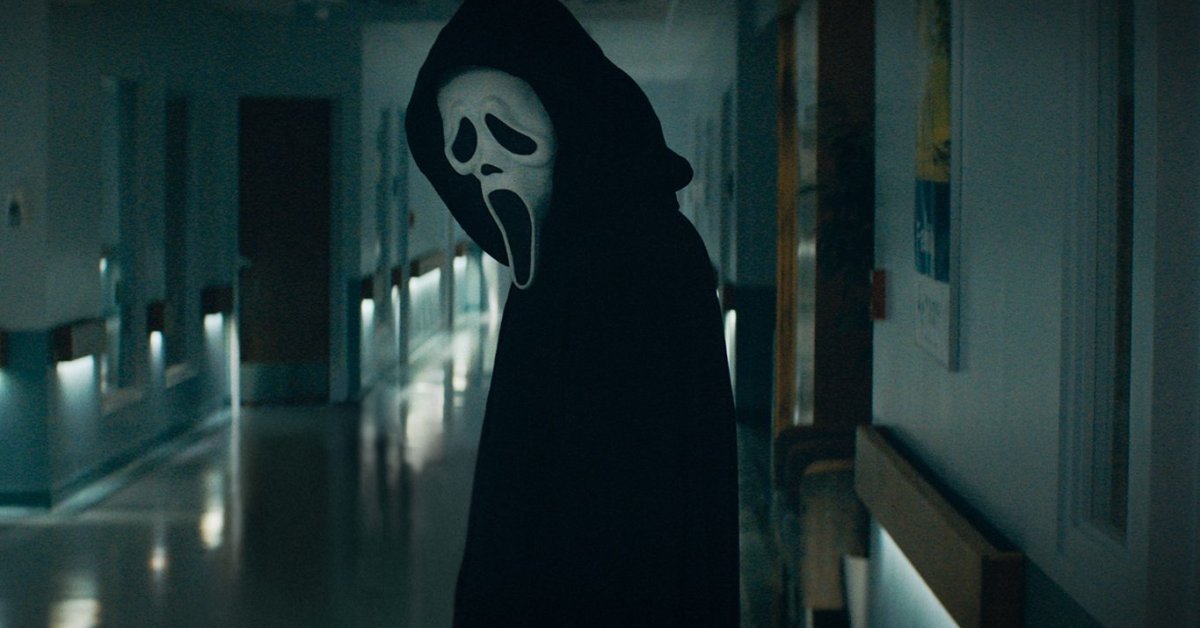 Warning: Spoilers ahead for Scream 5

Characters in the 1996 Scream were well-versed in the ground rules for horror movies. As Woodsboro, Calif.’s resident movie geek Randy Meeks (Jamie Kennedy) made clear in the franchise’s first installment, abstaining from sex is your best chance of making it out of a scary movie alive. He also advised you never, ever say “I’ll be right back”—because you definitely won’t be.

More than 25 years later, a new Scream offers some new rules. Early in the film, out Jan. 14, former sheriff Dewey Riley (David Arquette) lays out updated guidelines on how to survive a horror movie. Dewey’s new rules aren’t as conservative as those shared by Randy—purity rings are so ‘90s, after all—but they’re still pretty meta. You can’t survive nine stabbings across four films without noticing a few patterns. Unfortunately, the new Scream’s final girl, Sam Carpenter (In The Heights’ Melissa Barrera), doesn’t realize how prophetic Dewey’s directives are until the film’s final act.

Dewey’s golden rule is a direct callback to the original Scream: Never trust the love interest. In the 1996 movie, Sidney Prescott (Neve Campbell) learned this the hard way when her boyfriend and horror fanatic Billy Loomis (Skeet Ulrich) revealed his hometown killing spree was an act of revenge against her mom, Maureen, whose affair with his dad led to his parents’ separation. Maureen was his first victim and he wanted Sidney to be his last so that he could pin the murders on her.

Dewey’s new rules are an early clue that this Scream has much more in common with its source material beyond its title. At their core, the Scream movies aren’t teen slasher films, but are bloodsoaked whodunnits in which anyone and everyone is a possible suspect. Figuring out who’s behind the Ghostface mask is part of the fun—and often the killer is the most obvious choice.

Take the original: Billy’s red flags could be misinterpreted as red herrings, which made the final reveal that he’s the one doing all the stabbing a satisfying shocker. The fact that his accomplice Stu (Matthew Lillard) doesn’t really have a motive beyond “peer pressure” adds to the finale’s shock value. It also lets fans know that a character doesn’t necessarily need an elaborate reason to kill to be the killer—which might seem a little weak to the Gen Z teens of Woodsboro seen in the 2022 film. These highschoolers are more obsessed with “elevated horror” like The Witch, It Follows, and The Babadook than the classics like Halloween. However, they have to respect the slasher films that came before to solve a new mystery. This time around, Ghostface is killing off anyone with a connection to the original Woodsboro murders, which were the inspiration behind the Stab movie franchise, a running gag in the Scream series.

The new Scream is neither a reboot nor a sequel; it’s a “requel” as Randy’s niece Mindy Meeks-Martin (Yellowjackets’ Jasmin Savoy Brown) tells her friends in the early days of the town’s latest tragedy—in front of a literal shrine to Randy nonetheless. The old rules don’t necessarily apply, but Scream’s filmmakers Matt Bettinelli-Olpin and Tyler Gillett aren’t reinventing the wheel either. A “requel” toes the line between the past and present, offering a new-ish take on a classic while still paying respect to the legacy of the franchise. With the 2022 Scream, that means connecting the present and the past by introducing a surprising family link: Sam is Billy’s daughter.

How the new Scream fits into the franchise

The trick of making the killer a relative of someone from the original murders has been used in the three previous sequels to varying degrees of success. In 1997’s Scream 2, Billy Loomis’ mom (a deliciously deranged Laurie Metcalf) follows Sidney to college to seek vengeance. It’s basically impossible to guess that she’s the one behind it all, an ending that delighted some viewers while aggravating others.

Three years later, Scream 3 introduced Roman (Scott Foley) as not only the murderer, but Sid’s secret half-brother, Maureen’s illegitimate son, who was the architect of this whole tragic saga. The director of Stab 3, Scream’s movie franchise within a movie franchise, reveals that he showed Billy video proof of his dad’s affair which encouraged him to kill. It’s a long retcon that doesn’t quite feel in step with the original’s ending.

Yet, when Scream 4 turns Sidney’s teenage cousin Jill (Emma Roberts) into a fame-seeking psychopath out to become the sole survivor of the copycat murders that turned her cuz into a legend, it feels like a satisfying turn of events. Over a decade later, a narcissistic murderer willing to kill her own family for the Instagram “likes” feels ahead of its time.

Like Billy, Jill’s accomplice is her movie-obsessed friend Charlie (Rory Culkin) who wanted to remake the Stab movies, but ends up becoming just another casualty. It’s always important to remember that movie obsessives don’t usually fare well in this franchise—especially when they’re trying to rewrite the series to satisfy the fans.

What the new Scream does differently from the original

The new Scream resists the urge to make Sam the killer, a choice that would be a cutesy callback to the original in a less confident franchise. Sam doesn’t want to take down Sidney, the woman who killed her dear ol’ dad. Instead, she is afraid she’ll turn out just like Billy, whose ghost appears to her as an angel and devil on her shoulders. Sam is just a pawn in this cat and mouse game to get Sidney, who has vowed to never step foot in Woodsboro, back to the town.

To get her back, this Scream ups the stakes, brutally killing off Dewey just before he gets to play the hero—and win back his estranged wife, Gale Weathers (Courteney Cox). Sidney returns as the wise sage who is now living that LuluLemon mom life with her husband Mark, whose name real Scream fans will recognize as Patrick Dempsey’s character in Scream 3. Sidney’s back to pass along some final girl knowledge, seek vengeance for her fallen friend, and maybe pass the torch.

The final set piece takes place in a familiar locale, Stu’s house, where another party is being thrown despite a murderer being on the loose. Just like the original, the home’s latest occupant Amber (Mikey Madison), the bestie of Sam’s little sister Tara (Jenna Ortega), is one of two killers. Like any true crime fan, Amber did her homework on the house’s history and befriended a fellow Stab stan on Reddit who just so happens to be Sam’s boyfriend Richie (Jack Quaid).

Unlike previous Scream films, Richie isn’t interested in revenge or becoming a star, he’s just a fanboy with a bone to pick. Specifically, he thinks Stab 8 jumped the shark and he wants to remake the film. It’s a motive that feels a little to prescient knowing the toxic fervor of the #SnyderCut campaign or The Last Jedi discourse. Richie doesn’t see himself as a serial killer but a budding screenwriter just trying to do right by the movie and its fans since obviously he knows best.

The joke’s on him though since his rewrite is as schlocky as anything Hollywood could come up with. In his version of Stab 8, Sam is not the hero of the story, but the villain. Having Billy Loomis’ daughter show up at the scene of the original crime to kill Sidney 25 years to the day after she killed Billy is akin to resurrecting Palpatine for Star Wars: The Rise of Skywalker. It’s not shocking or inventive, it’s just lazy fan service.

The thing about rehashing tired storylines is that someone is bound to catch on, which Sam does. (Richie blaming her sister for the murders seemed to be the real giveaway.) Sam is able to suss out that Richie isn’t the nice guy he claims to be, but a toxic fanboy. She channels some of her late dad’s energy to murder her love interest who we should have known couldn’t be trusted. After all, Dewey predicted this outcome the moment he met him.

As for Amber, she puts a new spin on Stu’s “the movies made me do it” defense by claiming she’s been radicalized by 4Chan. But the “message boards made me do it” is a weak excuse that not even she can commit to. Amber is burned alive by Gale, a bit of karma for killing her late love, but like every other killer in the Scream movies she returns hellbent on finishing her plan.

When a scorched Amber makes one final attempt to kill Sidney and Sam, it’s Tara who gets to save the day while getting in the final word. “I still prefer The Babadook,” she says as she pulls the trigger. Moviegoers might feel the same way, but the new Scream manages to find new life in a dying genre.