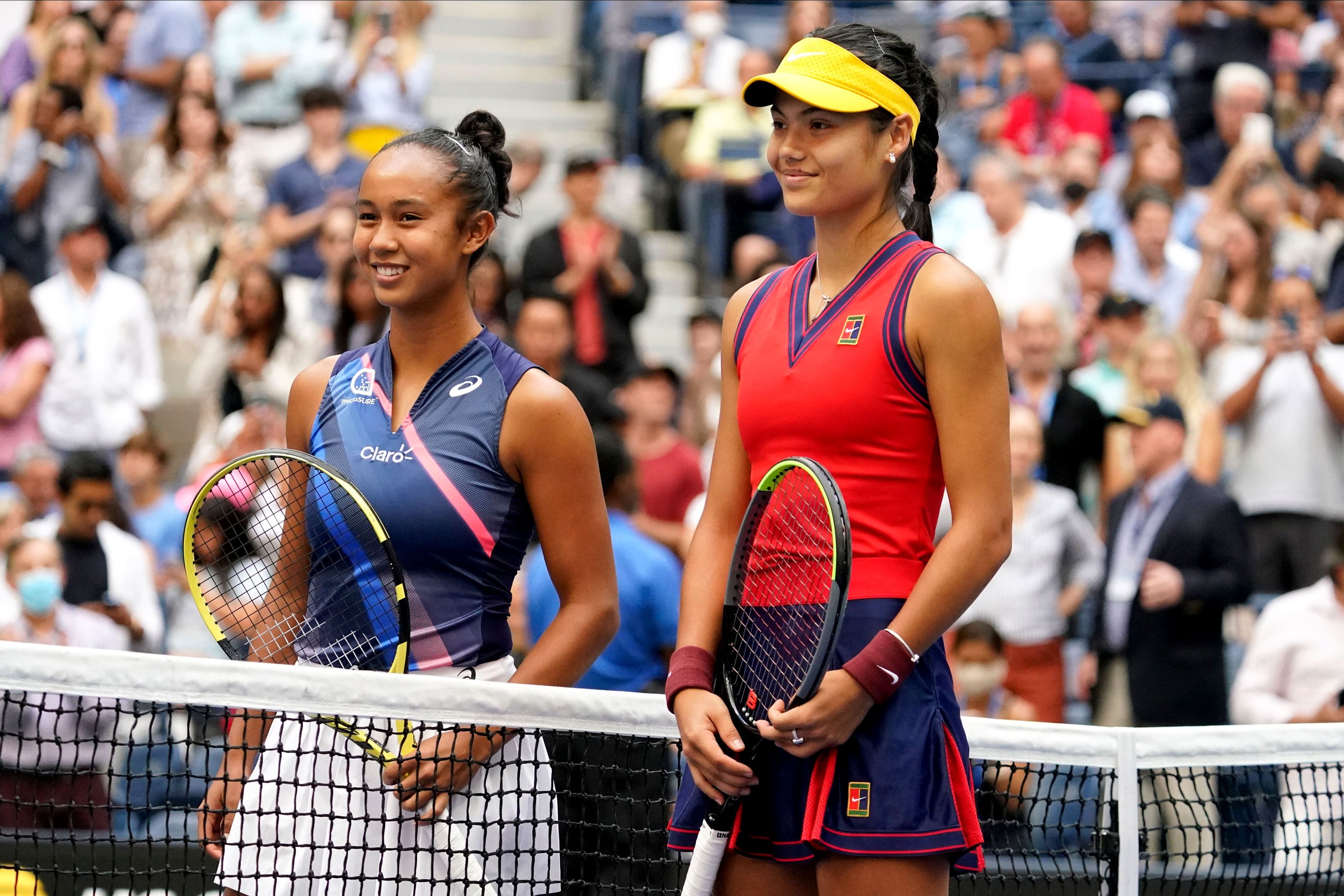 There was no way to know what to expect from the U.S. Open women’s final, because, for two weeks, the teen-agers Emma Raducanu, of Britain, and Leylah Fernandez, of Canada, had been making a mockery of expectations. An undersized scrapper ranked seventy-third in the world is not supposed to beat the defending champion, the 2016 champion, the fifth seed, and the second seed—usually by playing her best, bravest tennis in the tensest moments, as Fernandez did. A qualifier ranked a hundred and fiftieth in the world is not supposed to make the final of a Grand Slam, let alone in her second appearance in the main draw of a major—and only her fourth tour-level event, as Raducanu did. No qualifier, man or woman, had ever done it before. There was no precedent for reference, no personal history to point to, no analogue. In the tunnel, before she walked onto the court, Fernandez was asked what she expected the greatest challenge would be that day. “Honestly, I don’t know,” she said, with a smile. And how could she?

It wasn’t only that casual fans and cognoscenti alike were still learning about these two young women—their backstories, their game styles, their personalities, their patterns. It also seemed, thrillingly, like they were still learning about themselves. Both spoke of a growing awareness. Fernandez’s deep well of self-belief had been established long ago, by the faith of her family, her hard work, and her pride—the difficult and satisfying work of justifying her parents’ immense sacrifices for her career, and of proving people wrong. (After the semifinal, she told a story about a teacher who had advised her to give up tennis and focus on school, because she’d never make it as a tennis pro—words that she used as daily motivation.) Only now, though, did she realize that she could also draw confidence from the crowd. “Usually, when I was younger, I’d try to be as calm as possible, just like [Roger] Federer,” she said. In New York, though, she had smiled and roared and thrown her fist in the air, and had swung her arms to encourage cheers, and the crowd had responded, roaring and cheering and leaping up with her. She offered more than charisma, though she had that in spades. She invited the crowd to collaborate with her—to be included in something special, to have a good time along with her. It surprised her “that the more that I’m more outgoing on court, and that I try to get the crowd involved, the more I’m playing well,” she said, and added, “I’m glad that I’ve discovered that of myself.”

Raducanu, for her part, had been building her game incrementally over the summer. Her run at Wimbledon—where she had had to fight to be granted a wild card into the main draw—had shown, in a flash, her promise, before she had been overwhelmed by the immense physical and perhaps mental challenge of playing into the second week of a Slam, which had led to breathing problems that forced her to withdraw mid-match in the fourth round. But, instead of being scarred by that experience, she built on it. Now she knew what it was like; now she knew what it would take. In the course of a month or so, in match after match, grinding through a series of low-level events across the United States, she adjusted her game and her movement to hard courts, and to the professional ranks. Two years ago, she had planned on going to college. And that was still there for her: she had studied for her end-of-school exams and received ace results; she had the good fortune and maturity to know that her future did not depend entirely on the results of, say, a Challenger event in Landisville, Pennsylvania, where she played in mid-August, coming away with two thousand five hundred and seventy-three dollars for reaching the quarterfinals. Still, now her keen intelligence was trained entirely on the nuances of shot selection. She wasn’t sure how she would fare against top competition, she admitted. “I personally think inside I knew I had some sort of level inside of me that was similar to these girls, but I didn’t know if I was able to maintain it over a set or over two sets,” she said following her semifinal match. “To be able to do it and play the best players in the world and beat them, I honestly can’t believe it.”

Could she have maintained it over three? We still don’t know: she never had to, not dropping a single set on her way to the title, a rare and startling feat. (Novak Djokovic, for one, had dropped the first set in his past four matches.) Her sense of amazement never disappeared. As Raducanu held up the trophy, a 6–4, 6–3 winner over Fernandez, and celebratory streamers suddenly started falling all around her, Raducanu looked up and laughed, at once happy and startled.

It couldn’t have been expected, and yet it seemed no surprise that both women played at a high level from the start. Rankings were irrelevant; both players had earned their place in the final, and they knew it. Fernandez opened the first game with a sharply angled winner, and Raducanu, serving, finished it with her own untouchable crosscourt backhand. If there were nerves, neither showed them. Raducanu then put relentless pressure on Fernandez’s serve, finally converting her sixth break point. But Fernandez, in typical form playing from behind, broke right back. Raducanu broke again in the tenth game to take the first set and carried the momentum into the second set, racing to a 5–2 lead. Her game plan was simple, even textbook: control the point by changing directions; hit her returns deep and down the middle; aim for big, safe targets, but pounce on any chance inside the baseline. She pressured Fernandez’s slightly weaker serve relentlessly. What was unusual was in her fluid movements, and her execution. She had, at times, an uncanny ability to guess where Fernandez was going, pushing into the court on Fernandez’s serve and anticipating an easy put-away to rip a stunning passing shot for a break in the second set.

Fernandez, understandably, seemed to be flagging—in surviving the gantlet of top players, she had spent far more time on court than Raducanu coming into the match. Her legs, which she relies on for her superb defense and for her quick-twitch power, looked a little slowed, and, as she was no longer the underdog, her energy was a little flatter. Her serve, normally a surprisingly good shot for someone so small—at five feet six, Fernandez is diminutive for a modern player—was less precise than it had been earlier in the tournament; in the final, she made less than sixty per cent of her first attempts. But, serving at 2–5, she saved two match points, which seemed to revive her. She escaped with the hold with a superb forehand winner at the end of a nine-shot rally.

That was one more moment when Raducanu might have been rattled. Everyone knew what Fernandez could do if given the smallest opening. But Raducanu’s mind-set was revealing: she didn’t punish herself, or regret the missed opportunity of those two match points. “I was just thinking it was a bonus because she was serving,” she said afterward. “She’s allowed to play good points, because she’s a great player.”

And Fernandez was playing good points. Her level lifted. In the next game, with Raducanu serving, she hit a powerful shot and sent Raducanu desperately sliding as she tried to stab the backhand back. Her knee grazed the court, producing blood, and play stopped, as the rules required, while a trainer bandaged the bleeding cut. Fernandez, vocally displeased by the break, mishit a forehand. But she would recover to earn another break point, which Raducanu had to save with an acrobatic overhead. Raducanu then reached her third championship point with a stinging backhand down the line. This time, the match was on Raducanu’s racquet. She served an ace.

They were, in victory and defeat, as they are. Fernandez, ever the competitor, had tears in her eyes—but, after giving the disappointed speech of the runner-up, asked for the microphone back, to acknowledge 9/11 and what it meant to the city that had embraced her. Fernandez, who turned nineteen during the tournament, had not yet been born when the Twin Towers fell—but, with graciousness and awareness, she connected once more with the crowd. “I just want to say that I hope I can be as strong and resilient as New York has been the past twenty years,” she said.

What was next for Raducanu? Was she aware of what was coming—that she’d earned two and a half million dollars for the win, that the rabid British press was waiting for her at home, that the Queen had offered her congratulations? Only a few weeks ago, her plan had been to fly back to Europe and enter a qualifying tournament in Luxembourg. Now her ranking had shot into the Top Thirty—a jump that, if not unprecedented, was close to it. “I have no idea when I’m going home. I have no idea what I’m doing tomorrow. I’m just really trying to embrace the moment, really take it all in,” she said afterward. It might be that she quickly establishes herself as a top player—or that she loses, as she did earlier this summer, to players outside the Top Hundred. Both may be true. She is eighteen years old. The future stretches before her.