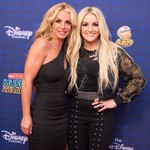 What happened to Britney and Jamie Lynn’s close bond — and when did it start to break? We chart the ups and downs of their public relationship below.

Jamie Lynn becomes a presence on Nickelodeon thanks to a role on sketch comedy All That. The network then greenlights her own show, Zoey 101, which boasts a theme song, “Follow Me,” penned by Britney. The sitcom is an instant ratings success.

A 16-year-old Jamie Lynn announces that she’s pregnant in OK! Magazine. Britney learns the news from the paparazzi; in her upcoming autobiography (more about that later), Jamie Lynn says her parents forbade her from telling Britney.

After a series of mental health issues, Britney father, James P. “Jamie” Spears, places her under a temporary conservatorship; later that year, it becomes permanent.

After giving birth, Jamie Lynn retreats to Liberty, Miss. with then-fiancée Casey Aldridge. When the engagement is called off, she moves to Nashville to pursue a country music career. Her next public interaction with Britney comes via her daughter, Maddie, who appears in the superstar’s “Ooh La La” video alongside cousins Sean and Jayden.

After Jamie Lynn self-releases a country single, “How Could I Want More,” which peaks at No. 29 on Billboard’s Hot Country Songs chart, she makes a cameo on Britney’s Britney Jean album, duetting with her sister on “Chillin’ With You.”

Jamie Lynn releases her second, and currently most recent, single, “Sleepover,” and Britney promotes the song on her Instagram. Shortly thereafter, Jamie Lynn decides to pursue acting instead.

Britney fires up her Instagram to celebrate Jamie Lynn winning an NSAI songwriting award for penning Jana Kramer’s top 10 Country Songs hit “I Got The Boy.”

The Spears sisters appear to be on great terms as Jamie Lynn makes regular appearances on Britney’s Instagram. In one post, Britney writes, “When I’m with my sister she makes my stomach hurt so bad from laughing!” In another, she jokes about Jamie Lynn joining hitmaking vocal group Fifth Harmony.

The first inkling of disquiet between the siblings occurs at the 2017 Radio Disney Music Awards, where Britney is awarded the first Icon Award. She is serenaded by Kelsea Ballerini, Sofia Carson, Hailee Steinfeld and Jamie Lynn, who performs a snippet of “Till The World Ends.” Audience footage shows Britney’s startled expression, and she later brings up this performance in an explosive 2021 Instagram post.

Jamie Lynn lashes out about the “Free Britney” movement, who have asked her to be more vocal on her sister’s behalf. “10 years ago, who was there?” she captions a video shielding Britney from paparazzi. “I have been here long before anyone else and I’ll be here long after. I love my sister with everything I have. So anyone or anything that speaks to the contrary can GTFOH with all the comments about what you don’t understand.”

The Los Angeles Times reports that Jamie Lynn is a trustee of part of Britney’s estate. She later denies being “on the payroll.”

With a Zoey 101 reboot in the works, Jamie Lynn releases a new version of “Follow Me” — the show’s original theme song, penned by Britney.

Britney’s explosive conservatorship hearing is held in Los Angeles. It’s the first time the world has heard the pop icon speak publicly on the matter. She is particularly critical of her family. “Anyone involved in this conservatorship, and my management who played a huge role in punishing me [should] be in jail,” she says. “And I would honestly like to sue my family, to be totally honest with you.”

Jamie Lynn breaks her silence in an Instagram story. “I felt like until my sister was able to speak for herself and say what she felt she needed to say publicly, that it wasn’t my place and it wasn’t the right thing to do,” she says through tears. “But now that she’s very clearly spoken and said what she needed to say, I can follow her lead.” Jamie Lynn reiterates that she has always been there for Britney, claiming to have “only loved and adored and supported” her big sister. Jamie Lynn’s post is not well-received by Britney fans.

Jamie Lynn fires up Instagram again to reiterate that she’s not “on the payroll” and goes as far as describing herself as “broke.” Three days later, she shares a photo of a box of toys that Britney sent her children, suggesting good terms.

Britney writes, “There’s nothing worse than when the people closest to you who never showed up for you post things in regard to your situation whatever it may be and speak righteously for support,” in a now-deleted Instagram. “How dare the people you love the most say anything at all … did they even put a hand out to even lift me up at the TIME !!!??? How dare you make it public that NOW you CARE … did you put your hand out when I was drowning ????”

The pop icon brings up that 2017 Radio Disney Music Awards performance. “I don’t like that my sister showed up at an awards show and performed MY SONGS to remixes !!!!!” Britney captions an Instagram post. “My so-called support system hurt me deeply !!!! This conservatorship killed my dreams.”

Jamie Lynn captions a selfie with “May the peace of the Lord be with you, and your spirit.” It turns out Britney wasn’t particularly receptive to the message, and replies with one of her own: “May the Lord wrap your mean ass up in joy today.”

Britney’s father is suspended from his role in her conservatorship after 13 years, and Britney celebrates on Instagram by posting a snap from the cockpit of a plane. The caption includes the sentence, “Pssss bringing the ship home, JL,” which many fans interpreted as a jab at Jamie Lynn — a few days earlier, Jamie Lynn had posted a photo of her daughter’s softball team with the caption “took home the ‘ship.” A ship emoji is present in both posts.

Jamie Lynn faces the wrath of Britney fans again when it is revealed that her autobiography is called I Must Confess — seemingly a reference to the chorus to her sister’s debut smash, “…Baby One More Time.” The title is promptly changed to Things I Should Have Said, and her publisher issues an apology. ​​“We deeply regret that incorrect and incomplete information about her book has appeared in the public space, particularly at this sensitive time for Jamie Lynn and her family,” Worthy Publishing states.

Britney catches wind of the title kerfuffle and references it in an Instagram post. “Psssssss also great news,” she writes. “I’m thinking of releasing a book next year but I’m having issues coming up with a title so maybe my fans could help !!!! Option #1… ‘S–t, I really don’t know’ Option #2 … ‘I really care what people think’ !!!!” What do you guys think ????”

“I don’t mind being alone … and actually I’m tired of being this understanding Mother Teresa,” Britney captions an Instagram post. “If you’re rude to me then I’m done.” She then makes it crystal clear who she’s referring to. “This message is to my family… for hurting me deeper than you’ll ever know !!! I know the conservatorship is about to be over but I still want justice !!!”