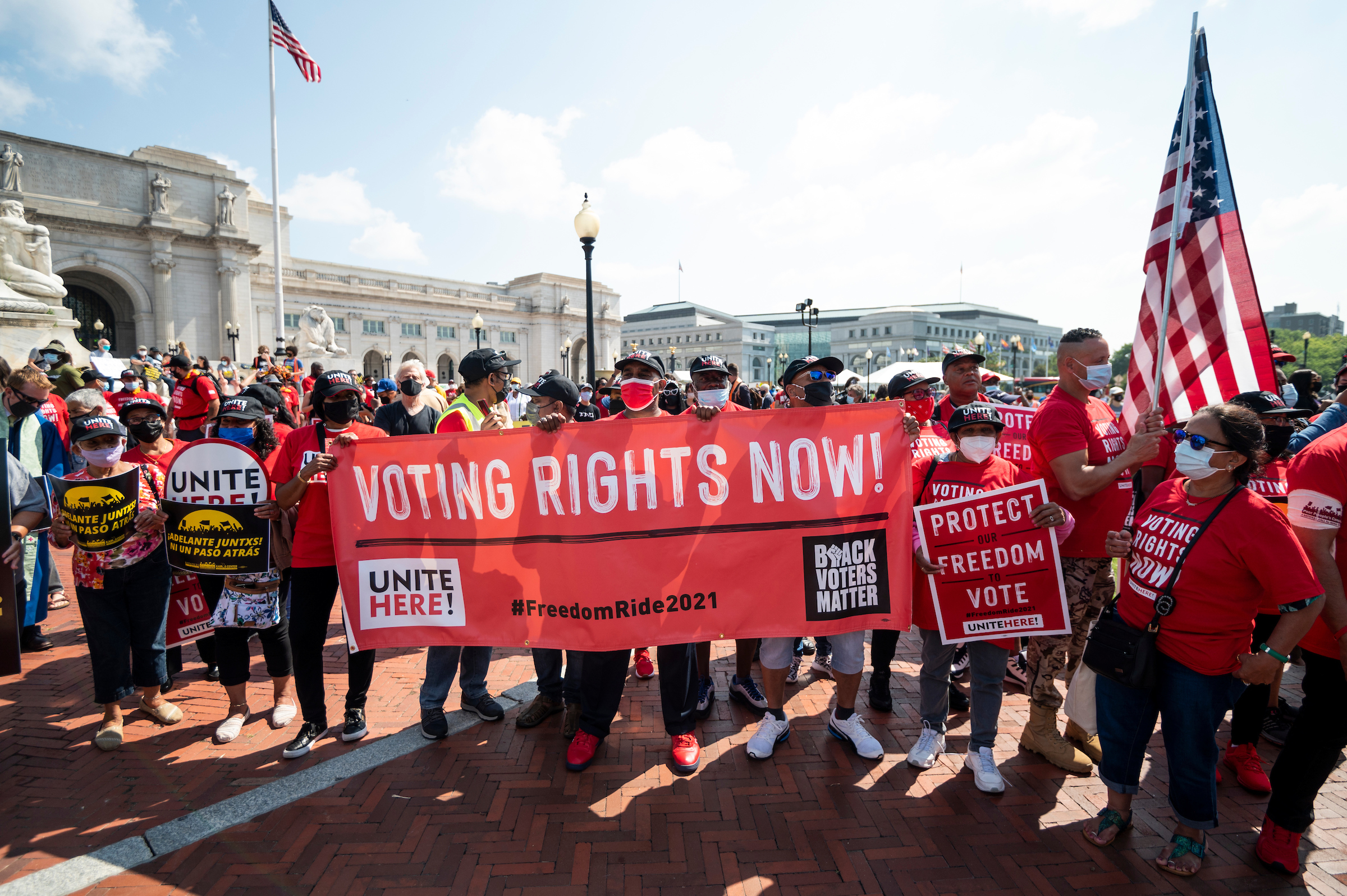 Groups pushing for voting rights and elections legislation in the Senate are planning a sustained campaign over the coming weeks, aiming to put the issue top of mind for Democrats, even as other matters have dominated in the chamber.

A broad coalition of liberal organizations will organize regular demonstrations outside the White House, other rallies and a multimodal relay from West Virginia to the U.S. Capitol. The effort is part of a push to keep the measures high on the agenda as negotiations over a reconciliation package, an infrastructure bill and raising the nation’s debt limit have taken center stage.

“We’re going to keep up and escalate pressure throughout this month and throughout November,” said Jana Morgan, director of the Declaration for American Democracy Coalition, an umbrella group behind the advocacy push.

The group has been pushing for passage of two bills. One is a scaled-back version of a House-passed measure to overhaul elections and campaign finance laws. Dubbed the Freedom to Vote Act, it was endorsed by West Virginia Democratic Sen. Joe Manchin III. The other is the Senate version of a House-passed bill to restore major sections of the Voting Rights Act that the Supreme Court scrapped in a 2013 decision, Shelby County v. Holder.

A Senate Judiciary panel’s hearing on that bill, named for the late Democratic Rep. John Lewis of Georgia, was interrupted last week by votes and caucus meetings over the debt limit.

Republicans, led in opposition in the Senate by Minority Leader Mitch McConnell, have attacked the measure as a power grab by Democrats that would let the federal government usurp local and state control over running elections. McConnell has called the bill “a solution in search of a problem” that was driven by “coordinated lies about commonsense election laws that various states have passed.” Despite Manchin’s self-proclaimed overtures to Republicans, none has endorsed the legislation.

Senate Majority Leader Charles E. Schumer has said he will bring the Freedom to Vote bill to the floor for a procedural vote, perhaps as soon as next week, although the situation remains in flux and subject to other priorities. A similar procedural effort in June to begin debate on the House-passed version of the bill, ostensibly so Manchin could try to amend it, was defeated in a 50-50 vote when 60 votes were needed to end a filibuster.

Lisa Gilbert, executive vice president of Public Citizen, which supports the bills, said proponents are employing a “slew of tactics” to garner attention. She said getting the legislation through the chamber remained a “major priority” for Democratic leaders.

But Democratic lawmakers are also focused on a sweeping tax and social programs package that would move under the reconciliation process so that it could pass along party lines. They’re also dealing with internal disagreement over House passage of an infrastructure package, which senators passed with bipartisan support.

“There are so many moving pieces,” Gilbert said.

If the partisan conflict over any of the other items, such as the debt limit, were to trigger more serious discussion among Democratic holdouts, such as Manchin or Arizona Democratic Sen. Kyrsten Sinema, to roll back or modify the chamber’s 60-vote threshold to overcome a filibuster, that could have a trickle-down effect on the voting and elections measures.

“We think Democrats should use any means necessary to pass the Freedom to Vote Act, including rules reforms as needed,” Gilbert said.

The focus on the filibuster in the voting and elections debate is a chief reason why activists plan to target the White House in the coming weeks. They want President Joe Biden to speak out forcefully in support of changing the filibuster, if that’s what it takes to get their bills to his desk.

Morgan, the coalition director, said five advocates, including People for the American Way President Ben Jealous, were arrested outside the White House last week. They were ultimately not charged with a crime, she said, but spent the night in jail.

“We are showing up and are going to force action,” she said. “We know that this procedural rule, the filibuster, is blocking progress, and we want President Biden to weigh in on this. We want to see President Biden using every lever of power to compel the Senate to move on this.”

Advocates see the Freedom to Vote legislation as a way to overturn or curb state laws where Republican legislatures have rolled back some of the 2020 pandemic voting practices, such as universal balloting by mail or early voting.

“We’ve got a really crowded Senate agenda, but the Center for American Progress and the Declaration for American Democracy Coalition are fighting every day to ensure that the Freedom to Vote Act stays near the top of the agenda,” said Michael Sozan of the Center for American Progress. “Our democracy is at stake. Yes, infrastructure and Build Back Better are incredibly important, but equally important is the infrastructure of our democracy.”