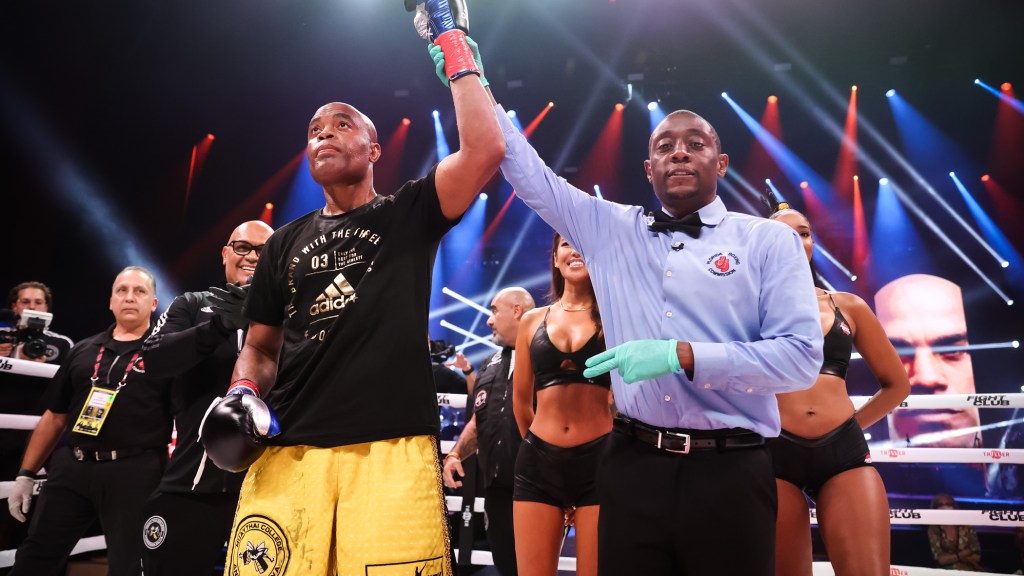 HOLLYWOOD, Fla. – The legend of Anderson Silva continues to grow as he keeps adding to his list of accomplishments in the twilight of his career.

After the former UFC middleweight champion departed from the UFC less than a year ago, it appeared his combat sports journey was coming to an end. However, the 46-year-old has found new life inside the boxing ring and looks like a brand new fighter.

On Saturday, Silva took on former UFC light heavyweight champion Tito Ortiz in a boxing match scheduled for eight rounds. Silva needed less than 90 seconds to get the job done as he put Ortiz out cold from his patented counter punching.

How does Silva continue to find ways to impress the masses and lengthening his career?

“The secret for me is, when I go inside the ring, I try to put everything else out and enjoy the moment,” Silva told MMA Junkie after the fight. “I train hard, I have the technique, I have my coach, my sparring partners who help me, and when I go inside, I just try to enjoy it.”

Silva was thought to be finished as a fighter a number of times during his career. Some tried to write him off when he lost via knockout to Chris Weidman at UFC 162 in 2013. Even more people thought he would never be seen competing again after he brutally snapped his leg in their rematch at UFC 168 a few months later, but he came back.

Although his run in the UFC after his leg injury wasn’t the best for his win/loss record, he continued to show up and put on incredible fights, giving more fans the opportunity to see him compete. After he suffered another leg injury at UFC 237 against Jared Cannonier, the talk of his retirement began to ramp up yet again, but he came back.

One last outing in the UFC was unsuccessful against Uriah Hall, as he lost via TKO in the fourth round. A 1-7 run and one no contest after dropping his middleweight title to Weidman surely meant it was time to call it a career. Silva refused to retire, and yet again, he came back.

For perhaps his final act as a fighter, he laced up the boxing gloves to compete in the sport he wished to try for many years. Eight months after his exit from the UFC, Silva was victorious in the boxing ring against former WBC middleweight champion Julio Cesar Chavez Jr. Despite the judges rendering a questionable split decision, the fight was not close, and many walked away wondering what Silva could have accomplished if he made the switch to boxing earlier in his career.

Just three months later, Silva would enter the boxing ring again, this time against another former UFC fighter in Ortiz. This time, Silva hardly broke a sweat in victory, leaving fans wondering what’s next. However, now, the talk of retirement is not at the forefront of anyone’s mind like it has been so many times in previous years.

Now 2-0 as a boxer in 2021, Silva shows no signs of slowing down and all of a sudden has a host of marquee fighting opportunities on the table. Talks of boxing against Oscar De La Hoya, Jake Paul, and Vitor Belfort were immediately contemplated in the aftermath of Saturday’s contest.

While Silva’s twilight still appears very bright, he is enjoying the moment at every turn, knowing he has prepared to put himself in a position to be successful at this stage of his career.

“When you love your job, when you love something you do with your heart,  you win and I’m happy,” Silva said.

Watch the full post-fight interview with Silva in the video above.