Allegations against Cuomo reignite a #MeToo debate for Democrats

Home /General/Allegations against Cuomo reignite a #MeToo debate for Democrats 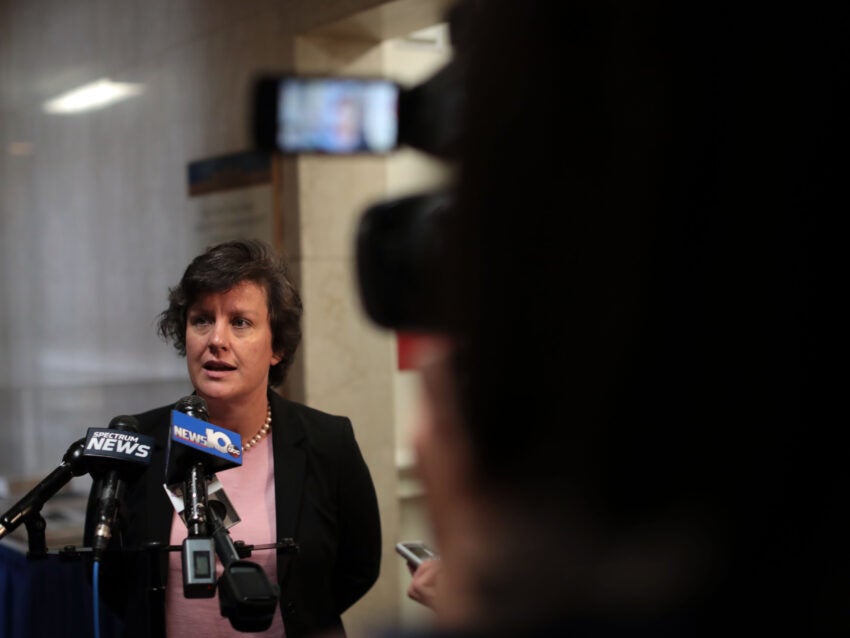 Stephanie Miner is no friend of Andrew Cuomo.

A onetime top Democratic official in New York and a former mayor of Syracuse, Miner has spent years criticizing the governor’s polarizing leadership style, even mounting a bid to unseat him in 2018. But as Cuomo fights for his job, facing growing calls by Democratic lawmakers to resign over allegations of groping and sexual harassment, Miner isn’t quite ready to push him out.

“We have this culture now of purity tests where there’s this instant gratification — are you on the right side or the wrong side?” said Miner, who wants to wait for an independent investigation into the accusations, which she believes is the best way to address broader problems of sexual harassment in Albany. “The answers and the solutions need to be more nuanced.”

Democrats are now confronting a highly fluid, still-developing situation in New York, with many voters appearing to share Miner’s caution about swiftly expelling the governor. The gravity of the allegations increased this week when the Times Union of Albany reported a new accusation against Cuomo: That when he was alone with a female aide in the Executive Mansion last year, he closed a door, reached under her blouse and began groping her. He has denied that he touched anyone inappropriately.

Support for Cuomo among Democratic politicians in New York has fallen away. On Friday evening, the state’s senators, Chuck Schumer, the majority leader, and Kirsten Gillibrand, called on him to resign, hours after most of the other Democrats in New York’s congressional delegation urged him to step down. A day earlier, state Democratic officials took the first step toward potentially impeaching Cuomo.

Public opinion could shift rapidly against Cuomo, but it is also clear that after a decade with him as governor, many Democrats have found that sitting in judgment of him — and demanding a penalty like resignation — isn’t so simple.

For some, the question of Cuomo’s future has intensified a conversation that has been happening within the party since Sen. Al Franken of Minnesota resigned in 2018: What should happen to powerful liberal male politicians who are publicly accused of sexual misconduct?

Four years into the #MeToo movement, there’s little consensus among Democrats around the appropriate process for handling such claims or the punishment for them. Until recently the allegations against Cuomo were mostly in the realm of sexual harassment, and Democratic voters have expressed reluctance to call for a resignation over such accusations without an investigation, according to interviews and exchanges with dozens of them this week. The groping claim rises to an accusation of assault, which has made some Democrats more open to his stepping down.

Yet a number expressed their view that Democratic officials accused of sexual misconduct have lost their jobs in recent years while Republicans haven’t — a misperception mostly driven by impressions of Franken’s resignation. It is a sentiment intertwined with lingering feelings about former President Donald Trump, who many Democrats believe never paid a political price after being accused of far worse treatment of women.

In remarks Friday afternoon, Cuomo stoked those concerns, saying he had no plans to resign his position and insinuating political motives behind the accusations. He asked voters not to make quick judgments about him, even though Cuomo has done so with others before, such as his call for Eric Schneiderman to resign as attorney general in 2018 as he faced detailed physical assault allegations.

“People know the difference between playing politics, bowing to cancel culture and the truth,” Cuomo said. “A lot of people allege a lot of things for a lot of reasons.”

Meredith Pilat, a Democratic voter in New York City, said that her view of Cuomo had shifted after the accusation of groping and that she could no longer defend his actions. But she still wants an investigation and does not believe he should be impeached without “hard-core evidence.”

“I think he deserves his day in court and the opportunity to defend himself. Everyone these days rushes to condemn, especially in politics, and that needs to stop,” she said. “While what he allegedly did was certainly not right, it doesn’t even come close to some of the antics from the other side.”

She added, “When I watch the Republican Party play dirty every day, I get a bit annoyed at the double standard imposed on Democrats.”

Beyond Franken, who was accused of groping and forcibly kissing women, only a handful of prominent Democratic politicians have lost their jobs as a result of allegations of sexual harassment or assault. Fewer still have hurt their party’s grip on power: Franken, was replaced in the Senate by another Democrat, Tina Smith, who won reelection by a comfortable margin last year.

“My worry is that people have some sort of contorted idea that #MeToo has meant lots of powerful people losing their jobs,” said Fatima Goss Graves, the president of the National Women’s Law Center. “The truth of the matter is, we are still in the midst of a really important reckoning that hopefully will allow people to work and live with safety and equity.”

Still, concerns about Franken’s resignation persist for some Democratic voters, prompting some politicians to change their approach toward claims of sexual misconduct. The independent investigation into the allegations against Cuomo — as well as an impeachment inquiry authorized by the New York state Assembly on Thursday — creates a process for handling accusations in a way that may be perceived as fairer by the public.

“There were some lessons learned from Franken,” said Shaunna Thomas, a founder of UltraViolet, a women’s rights advocacy group. “You can’t reach a conclusion about what needs to happen ahead of the process or investigation.”

She added, “It’s a really unfair proposition if this is all left to the court of public opinion.”

The debate over the appropriate process for handling the accusations against Cuomo underscores larger questions for Democrats in the post-Trump era. After Democrats cast their support for equality in moral terms during the Trump administration, conservative news outlets have eagerly tagged the party with charges of hypocrisy for failing to uniformly demand an immediate resignation. That has revived worries from some Democrats that their party is imposing a politically damaging purity test.

Similar questions rocketed to the center of the presidential campaign last year, after President Joe Biden, then a candidate, was accused of sexual assault by Tara Reade, a former aide. The allegations did not resonate among most Democratic voters, and the issue faded.

Politics, with its tribal loyalties, is a challenging environment to litigate such claims, which can involve a lot of gray area when it comes to delineating the severity of sexual misconduct. Political institutions generally lack independent mechanisms to fairly investigate claims in a way that protects both the accusers and the accused. And in the court of public opinion, not all accusations carry the same weight, despite the intense public scrutiny faced by those who come forward.

The anonymous nature of the most serious accusation against Cuomo — not an uncommon occurrence when dealing with traumatic sexual assault — makes it easier for some voters to dismiss the alleged behavior.

“With more allegations, it seems more clear that it would have been better for him if he resigned, and better for his accusers if there were an independent investigation rather than trial by media,” said Gloria Steinem, the country’s most famous feminist activist.

That isn’t how some Democratic voters understand the changing mores of this moment. Waiting for a bus in Harlem this week, Cheyse Murray was outraged by the suggestion that Cuomo should resign, saying he had been one of a few officials helping people through the worst part of the pandemic.

“Out of all the governors, he was the one keeping us safe from the illness, going on television,” Murray said. “Democrats just want to make an example of him because they couldn’t get Trump.”

A series of surveys conducted before the latest allegation emerged found that most voters did not want Cuomo to resign, even as his approval rating has plummeted and a majority of voters say he should not run for a fourth term.

Even some of Cuomo’s fiercest critics admit that his slide from liberal hero to politically imperiled leader has caused whiplash for some voters, who are struggling to keep up with the ballooning sense of controversy that has engulfed his administration as he confronts a series of federal and state investigations.

State Sen. Alessandra Biaggi, a critic of Cuomo and a former aide, acknowledged that some voters were struggling to reconcile the image of the governor as an abusive leader with a man many turned to during one of the scariest periods of their lives.

“What’s hard for people to hold in their mind is a discordant belief that at the same time that this person made you feel safe, he was doing things and making decisions that were not only bad, but riddled with misconduct,” said Biaggi, who was one of the first to call for his resignation.

Cuomo has apologized for some of his behavior but has also made a play for time, asking people “to wait for the facts” to emerge from the investigation, which is being overseen by state Attorney General Letitia James and may take several months. His political support may not hold that long.

Few Democrats from outside New York have commented on the matter, nor has Biden, though his press secretary, Jen Psaki, has repeatedly voiced support for the investigation — a sentiment echoed on Monday by Hillary Clinton.

Those who are calling for Cuomo’s resignation point to what they see as the hypocrisy of his behavior, arguing that some of his actions would violate a sweeping workplace harassment law that he signed in 2019. They also argue that the allegations against him fit into a larger pattern of abuse of power.

Susan Joseph, a Democrat and retired teacher from Rhinebeck, New York., said the accusations had changed her opinion of the governor, who she thought had a “rather obnoxious personality” but had deftly managed the early days of the pandemic. She now thinks he should resign.

“To use his power to rob young women of theirs was just unconscionable,” said Joseph, 71. “He has done good things for this state, but proven himself to be yet another privileged white male, and an old one at that, who thinks he is untouchable. I find his behavior despicable.”

Switch Is Now Nintendo’s Second Best-Selling System In The US, In “Tracked History”
George Floyd’s family settles suit against Minneapolis for 27 million