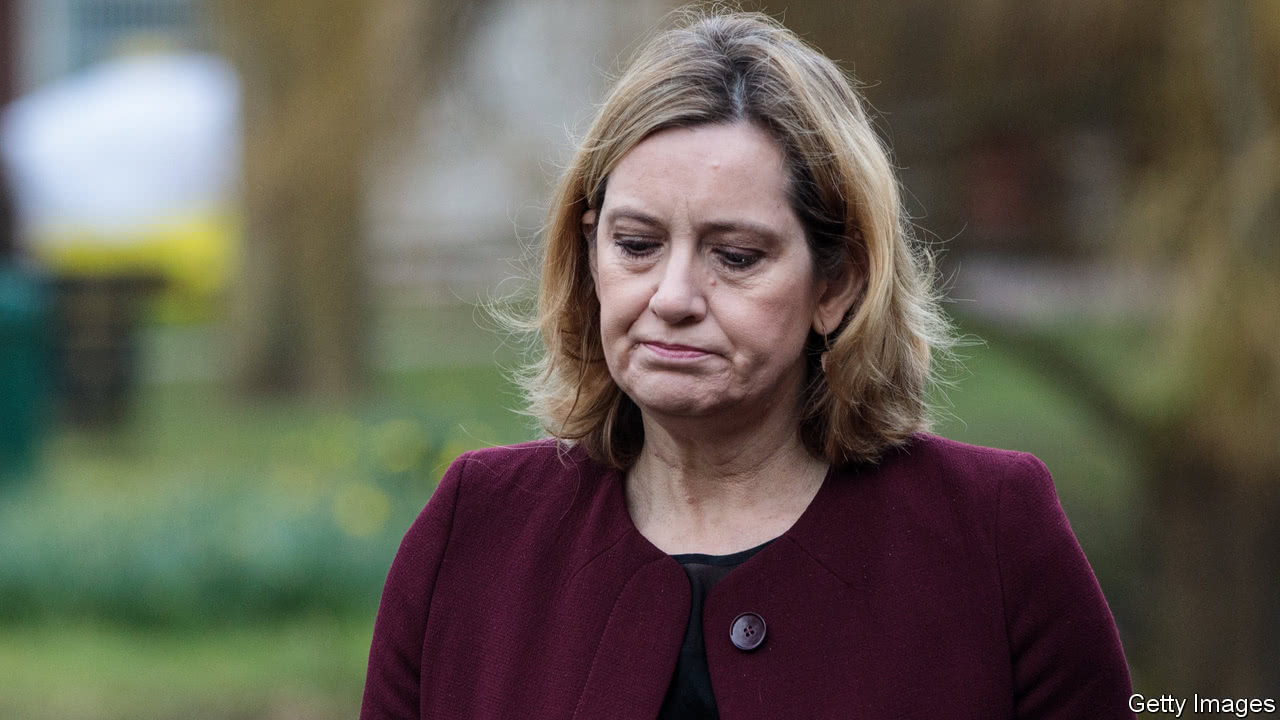 IN THIS week’s Bagehot column I ventured that Amber Rudd, Britain’s home secretary, was probably not fatally wounded by recent events, “unless there is another scandal festering in the Home Office’s basement”. It turned out that there was a lot of festering going on. Just before 10pm on April 29th Ms Rudd tendered her resignation, pitching Theresa May’s ill-starred government into yet another crisis.

This is the fifth resignation of a cabinet minister in this ten-month-old parliament: just over 20% of Mrs May’s second cabinet have quit their jobs since June 2017. Even by the standards of today’s just-in-time economy that is quite a turnover. It is also by far the most serious. Ms Rudd was one of the rising stars of the Conservative Party—and one of the very few Conservatives who came out of the last election with her reputation intact. Her resignation is a blow to the party’s future. She was also, together with Philip Hammond, the chancellor, the Cabinet’s leading “Remainer”. Ms Rudd’s resignation threatens to tilt the balance of power in both the cabinet and the party at large in favour of the hard-line Leavers. The cabinet Brexiteers (Michael Gove, Boris Johnson, Liam Fox and David Davis) have lost a doughty and experienced opponent. Tory liberals have lost (perhaps temporarily) their best chance of replacing Mrs May with someone who favours a liberal Brexit. Though she did not see eye-to-eye with the Conservative Party membership over Brexit, Ms Rudd made them feel comfortable, with her head-girl demeanour and easy manner. The nightmare of a Jacob Rees-Mogg- (or Boris Johnson-) led Conservative Party has just got a little closer. Ms Rudd’s successor, Sajid Javid, previously secretary of state for housing, communities and local government, lacks her commitment to the Remainer cause.

Ms Rudd’s fate was sealed during her appearance before the Home Office Select Committee on April 25th, when, almost as an after-thought and towards the end of a long session, Yvette Cooper, the committee’s chairwoman, asked about earlier evidence from the immigration officers’ union on targets for the number of people who should be deported from the United Kingdom. Ms Rudd (who had acquitted herself very well up to that point and looked pretty confident about her future) replied, “We don’t have targets for removals.” This set off a cycle of claims and counter-claims, fuelled by leaks from within the Home Office bureaucracy. A document appeared that made it clear that immigration officials had indeed been given targets. Ms Rudd claimed that she had not seen any documents detailing targets—they may have appeared in her ministerial red box but the department produces thousands of pieces of paper. Backbenchers rallied to her defence, underlining not only Mrs May’s determination to keep her but also how popular she is with her party.

But on Sunday afternoon the Guardian (which has driven this controversy) produced a letter that Ms Rudd had sent to the prime minister in January 2017 talking about her ambition to increase the deportation of illegal immigrants by 10%. Ms Rudd’s defenders tried to make a distinction between “targets” and “ambitions”, but this did not fool anyone. Not long after the letter was published on the internet Ms Rudd fell on her sword—or, perhaps, it would be more accurate to say that she fell on Mrs May’s sword, since most of these policies were invented and driven by the prime minister.

The resignation is a big blow to Mrs May, who had looked, after her successful handling of the Salisbury poisonings, as if her luck was finally turning for the better. Ms Rudd was a firewall between Mrs May and the policies that she pursued as home secretary. Ms Rudd did not agree with Mrs May entirely: she frequently battled with the prime minister in cabinet over the question of whether students should be included in migration targets. But she clearly strived to please her boss, as the fatal letter boasting about increasing the deportation of illegal immigrants by 10% suggests.

The removal of Mrs May’s firewall leaves her personally exposed to the fire storm that is the Windrush scandal (which is about how Britain treated people who had been in the country for decades, but who, for administrative reasons, do not have the right documentation). She has little choice now but to defend her policies herself rather than letting Ms Rudd’s successor take the heat. She needs to demonstrate that there is a meaningful distinction between the Windrush scandal and illegal immigrants who are breaking the law by being here. Mrs May also needs to confront her critics with the question of whether they think that Britain should turn a blind eye to illegal immigrants—and stop enforcing the law simply because doing so can, at times, be very difficult.

The resignation is also a big blow for Remainers who normally regard anything that damages Mrs May as a gift from heaven. Ms Rudd was the most outspoken voice in the cabinet arguing for Britain to remain in the EU customs union (her brother, Roland Rudd, runs a public-relations company and is one of the business world’s most prominent Remainers). She was also the only real bridge between the Remainers and Mrs May, who has largely thrown in her lot with Leavers since the election (the other prominent Remainer in the Cabinet, Mr Hammond, is on notoriously bad terms with the prime minister). This shift in the balance of power towards the Brexiteers comes at a time when Britain is deciding whether to remain in the customs union or to sail off into the wide blue yonder.

Hostile environment
What else can we glean from this rather depressing episode? The first thing is that the Home Office is a nightmare to run. It is still not clear whether Ms Rudd was guilty of dissimulation or of simply not being on top of her brief. But being on top of your brief is almost impossible in a department with so many sprawling responsibilities. The department has a far higher ratio of operational activities to policy activities. In some departments, like the Treasury, a significant number of officials are involved in crafting policy; in the Home Office most officials are engaged in administering things, many of which have a direct bearing on people’s liberties. The department is also littered with land mines: one former home secretary says that at any one time there are 30 people in the Home Office who can destroy the home secretary’s career. The trouble is that neither the home secretary nor the potential wreckers know who they are. Mrs May was profoundly shaped by her six long years in this dangerous atmosphere. She focused on a handful of policy issues (notably immigration) and relied on two clever but aggressive lieutenants, Nick Timothy and Fiona Hill, to prevent the disasters and to contain them if they occurred. No wonder she is such a brittle, defensive person.

The second thing is that British politics is a profoundly dysfunctional game played by the British equivalent of Italy’s La Casta: an inward-looking coterie of politicians and political journalists who live in each other’s pockets and then periodically engage in a blood bath. Amelia Gentleman, the Guardian journalist who drove this story, is married to Jo Johnson, a transport minister and brother to Boris Johnson (though he sometimes gives the impression that he wishes that he wasn’t). The press pack quickly turned a debate about difficult questions of immigration (how can you discourage illegal immigration without creating a “hostile environment” for legal immigrants?) into a crude blood sport. What other incriminating documents can be dug up from the Home Office’s capacious archives? Would Ms Rudd survive the weekend? Who would replace her?

You might say that this is just the press doing its job: Ms Gentleman certainly deserves accolades for her six months of digging into the Windrush debacle. But it also raises questions about the health of British democracy. Why should talented people go into politics when they face the prospect of seeing their careers end in public embarrassment? The British love to complain about the quality of their politicians but then rejoice in the sort of fox hunt that inevitably reduces that quality. The system seems to be in danger of destroying itself. The ever-growing bureaucracy loads down ministers with documents that they cannot possibly absorb, while the ever-more-feral press corps, desperate for clicks and retweets, goes hunting for “resigning matters”. The only people who benefit from this are populists who claim that the ruling class is inherently corrupt and offer salvation in the form of outsiders who do not play Westminster’s cynical games. Ms Rudd’s resignation was a victory for system-destroying populists as well as for Brexiteers.

The third thing is that immigration continues to be the most explosive force in British politics. The Tony Blair government pursued one of the most liberal immigration policies in the Western world under the twin auspices of “business Britannia” and “cool Britannia”. The business world liked liberal immigration because it provided them with willing workers and metropolitan liberals liked it because it represented “openness”, “multiculturalism” and an end to the boring old Britain of bad food and cultural prejudice. The most far-reaching change in the composition of the British population took place without any serious discussion on the country’s major broadcaster, the BBC, and very little in the rest of the press.

But since then the reaction against mass immigration has profoundly reshaped British politics. It drove the revival of the Conservative Party after three terms of Labour government. David Cameron carefully tempered his drive to modernise the Tory Party with minority- and gay-friendly policies with a promise to reduce immigration to the tens of thousands annually. It drove the Brexit vote. Leavers won because they promised to “take back control” while simultaneously accusing the Remainers of sub-contracting the decision over who lives in the country to foreigners. (Ironically, Britain’s discontent about immigration would not have reached such heights if Mr Blair had chosen to use the “brake” on the flow of East European immigrants that the EU offered). It is currently driving the national debate about Windrush and immigration targets. Ms Rudd’s testimony to the House of Commons and the Home Affairs Select Committee shows that the Home Office is desperately trying to reconcile all sorts of conflicting goals—reducing the level of illegal immigration and trying to extricate Windrush-generation Britons from the bureaucratic machine—while also dealing with the day-to-day pressures of monitoring the vast flow of people in and out of the country.

The government has rightly been condemned for its appalling treatment of the Windrush generation and its obfuscations about whether Britain has targets for the removal of illegal immigrants. But the politics of immigration has a way of spiralling in unexpected directions. The immigration question contains plenty of traps for Jeremy Corbyn’s Labour Party. The party risks being seen as soft on illegal immigration. Blurring the distinction between Windrush-generation citizens and illegal immigrants who have come to Britain via people-smugglers or have outstayed their visas might be useful for winning debates in Parliament but it is not useful for producing a workable immigration policy that respects the rule of law and the rights of people who have paid into the welfare system. This risks driving a further wedge between the Labour Party in London (with its large supply of minorities and minority-friendly metropolitan liberals) and in the old working-class heartlands. It also risks creating problems for the country more generally. The less respectable politicians are willing to talk about controlling immigration, the more the subject fuels subterranean forces that, like Brexit, suddenly come from nowhere to overwhelm the political system. The last few weeks have raised the price of doing such talking.