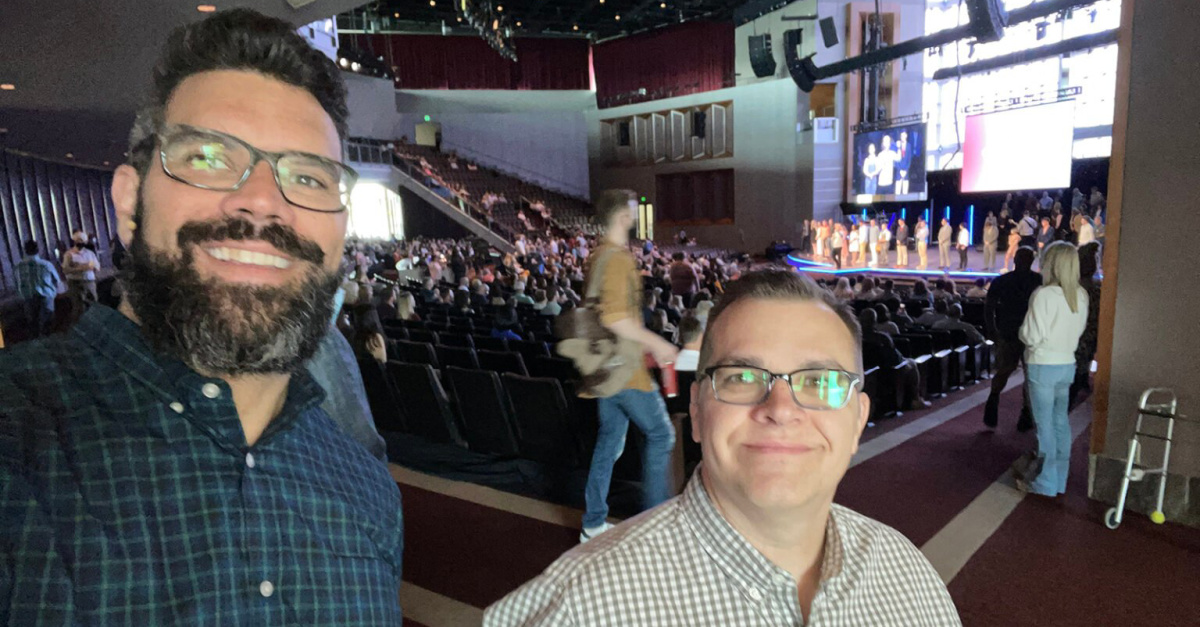 (RNS) — For the past seven months, Long Hollow Baptist Church has been a place of miracles and wonder.

Like many congregations, Long Hollow had experienced a downturn due to COVID-19. In December 2020, it had the lowest attendance since Robby Gallaty arrived as pastor in 2015.

Since then, in what church leaders call a revival, the Southern Baptist congregation has baptized 1,361 people, seen crumbling marriages restored and lives that were falling apart turned around.

The church staff has seen some of the “highest highs” of ministry during that time, said Gallaty.

They’ve also been racked by grief over the death of beloved staff pastor Chris Swain, who died Thursday at age 47.

Last Friday (July 9), Swain, an author, podcaster and discipleship pastor at Long Hollow, had been planning to go to a baseball game with Gallaty, one of his closest friends.

Before leaving for the game, Swain took the family dog, Emmitt, out for a walk.

Swain was found at around 6 p.m., lying by his mailbox, unresponsive and non-breathing.  A neighbor came by, started CPR and called an ambulance, according to an update from Swain’s wife.

Swain was taken to the hospital and placed on a ventilator but never regained consciousness.

“We begged God, we read Scripture, we wept at times because we could not talk,” said Gallaty, who also shared prayer requests for Swain on social media.

“What I have witnessed over the past week was the church of Jesus at her best. Loving, serving, weeping, praying, and trusting God with this beloved family,” Floyd told Religion News Service in an email. “I thank God for the leadership of Pastor Robby Gallaty, his wife Kandi, the Long Hollow staff team and the entire church family.”

Thanks for all the prayers and support for Chris, Melissa and the family. He’s with the Lord now.

A former Marine and graduate of Liberty University, Swain served at churches in Florida, Texas, Georgia and Arkansas before becoming an editor at Nashville-based LifeWay Christian Resources.

In 2016, he was hired to help Gallaty run Replicate Ministries, which trains churches to run discipleship programs, and to work at Long Hollow. Gallaty credited Swain with helping Replicate take off. The two co-authored a 2020 book on discipleship.

Along the way, he and Gallaty became fast friends, with a shared love of fishing, kayaking and magic tricks.

“He was my closest friend in the world,” said Gallaty. “He is part of everything we do. He’s going to leave a huge void, not only for our church but for me as a friend.”

Last week, both of their families were out of town, and the two planned to go to a ballgame together. Swain texted his friend before taking the dog for a walk, saying he would soon be on his way.

“I was the last person he texted,” Gallaty said.

Swain’s death hit Gallaty hard. He’s had four friends die unexpectedly since 2018, including well-known pastors Jarrid Wilson and Darrin Patrick, as well as another beloved church staff member. The same day that Swain died, Gallaty’s father-in-law was rushed to the hospital after being found unresponsive.

Long Hollow Baptist, a Southern Baptist congregation of about 6,000, has been no stranger to grief as well. The church lost their long-time pastor David Landrith to cancer in 2014. This past December, a congregation member and her young son were murdered in their home.

In recent months, Gallaty said he’s learned that faith endures, even if his prayers aren’t answered in the way that he or church members hoped. And faith does not make you immune from sorrow.

In his grief over the death of Swain and other close friends, Gallaty has tried to lean on the words of a well-known hymn: “When darkness seems to hide his face, I’ll rest on his unfailing grace.”

“The Bible doesn’t offer explanations to cope with life’s problems,” he said. “It offers promises to cling to.”

In one of his last social media posts, dated on Father’s Day, Swain wrote about praying for friends who had lost children.

“You are not alone,” he wrote. “I cannot wait until THAT day in heaven (when) we witness those many reunions. Praise God, our hope is in Him.”

Swain is survived by his wife, Melissa, and their two children. Services are pending.

READ THIS STORY AT RELIGIONNEWS.COM