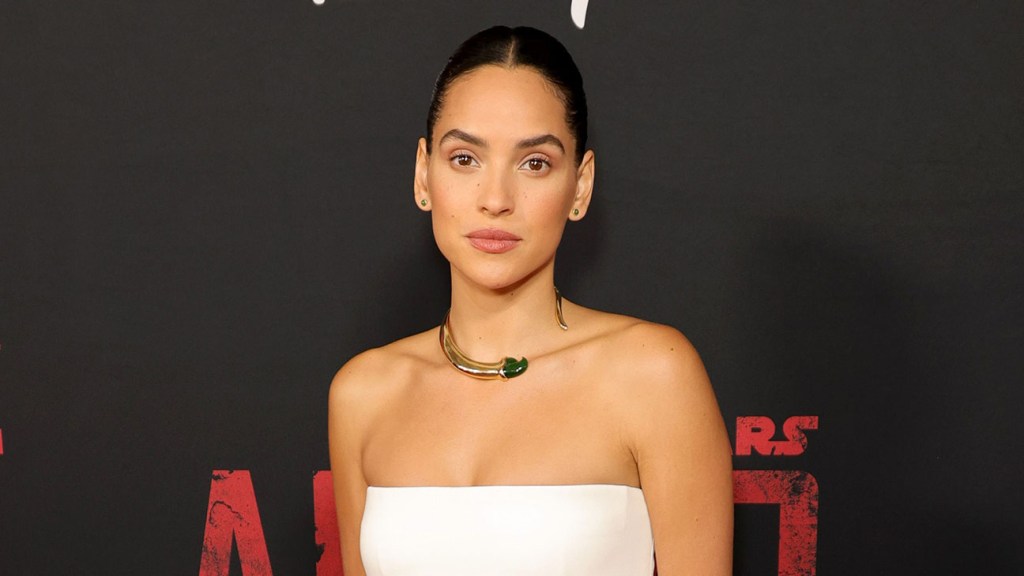 At the height of the pandemic, Andor star Adria Arjona flew all the way to London to audition alongside Diego Luna (who plays the titular Rebel Alliance officer Cassian Andor), and within a span of 10 minutes, series creator Tony Gilroy welcomed her to Star Wars. Arjona plays Bix Caleen, who’s a mechanic and one of Cassian’s oldest friends on the planet Ferrix. In their first scene together at Bix’s small business, it’s suggested that the two characters have untapped feelings for one another, resulting in Bix’s current love interest, Timm (James McArdle), to jealously betray her by reporting Cassian to Imperial Security.

According to Arjona, the backstory for Bix and Cassian’s relationship is still up in the air.

“They’re childhood friends, and there’s this mystery of, ‘Were they ever really in love?’” Arjona tells The Hollywood Reporter. “So it really is kind of unknown, but through their long friendship, trust has been built and then broken and then built back up and then broken again. But she always ends up picking him over everything, and it kind of sucks.”

Andor’s first three episodes have now premiered on Disney+, and the response has been overwhelmingly positive since the series is a welcomed departure from the previous Star Wars shows. Arjona credits one individual for this new direction.

In a recent spoiler conversation with THR, Arjona also recalls the story of how her mother gave her the positive reinforcement she needed to fly to London and audition during a precarious stretch of the pandemic.

Well, we can finally say the name Bix Caleen.

Thank God! I’ve been wanting to get a tattoo of Bix.

I know you put it off because of spoiler fears, but are you still planning to get it?

When we spoke in April, you described Bix as a practical woman. Were you referring to the fact that she’s a mechanic of sorts?

Yeah, it’s hard to talk about her at such an early stage. I mean, she is incredibly practical and fearless and bold and loyal, even sometimes to her own detriment. She cares so deeply about the people around her, and it really takes her on a journey. So I’m in love with her in a way. I just think she’s the coolest.

What can you tell me about her history with Cassian? What makes her so protective of him?

I know they’ve had a long friendship. They’re childhood friends, and there’s this mystery of, “Were they ever really in love? Were they ever together? Is there jealousy between Cassian and Timm? Is this a love triangle?” So it really is kind of unknown, but through their long friendship, trust has been built and then broken and then built back up and then broken again. But Bix still cares deeply for Cassian. He’s incredibly complex and complicated, and he always seems to get himself in trouble or do things a different way. And like I said, Bix is so practical. She has her own business, and she is finally running it the way she wants to run it. She’s at the top of her game. She finally has stability, but every time Cassian comes in, he just disrupts it a little bit. So she almost wishes better for Cassian, and she’s incredibly protective over him. But she always ends up picking him over everything, and it kind of sucks.

Yeah, Cassian is unreliable in a lot of ways, but Timm (James McArdle) is a guy who will jump through hoops for Bix, to a fault.

So did she settle for Timm because she was tired of Cassian’s unpredictability?

I personally think so. Timm is safe. Timm is responsible. They function well together. They run a business together. Maybe she had hopes and dreams that it could’ve been Cassian, but who knows? It’s just impossible with him, hence that line that Cassian gives Bix, and Bix responds, “I don’t ask you about your personal life.” So you could really feel the tension in that moment of, “Oh, he doesn’t like that Timm is in my life.” (Laughs.) But he comes and goes a lot. That’s his way of protecting the people that he loves.

For anyone who may have missed our last interview, would you mind retelling the story of how you landed the role in the room?

Oh my God, I did tell you that. I didn’t tell that story to too many people. So I sent a tape in, and then I got called to go to London in the middle of the pandemic. So I called my mom, and I was like, “Mom, they want me to go to London, but there’s this thing called COVID. What should I do?” I was just so scared. I’m a true hypochondriac at heart. I was like, “What is going on with the world?” And she basically said, “Adria, you’re a swan. You could swim in a lake of shit and not get stained. Let the Force be with you, my daughter.” And then she hung up the phone on me.

So I ended up going to London, and I met Tony [Gilroy] and Diego [Luna] in person. We did one scene together, and Tony just stood up and was like, “Diego, meet your co-star. Adria, meet your co-star.” And I was like, “I’m sorry, what?” And Tony was like, “Welcome to Star Wars.” And then my heart just dropped. That whole testing period only lasted 10 minutes, and I did the scene once, plus another quick little scene. And all of a sudden, I was in Star Wars. It was the wildest thing, and it doesn’t speak to my acting abilities at all. I think it speaks more to Tony’s ability to see something and go, “That’s right.” The decisions that are made throughout the show — with the writing, the sets, the costumes and the worlds — are very much Tony, going, “I think it’s that, I think it’s that, and I think it’s that.” And that’s why it works: because we had a vicious leader.

Bix helps Cassian meet Stellan Skarsgard’s character, Luthen Rael, and he’s likely going to be the one to put Cassian on the trajectory towards becoming the Rebel hero who steals the Death Star plans in Rogue One. And that effort ultimately led Luke Skywalker to destroy the first Death Star and save the galaxy. So, technically, Bix had a hand in saving the galaxy, too. Have you thought about Bix’s role in the grand scheme of Star Wars?

I have. I really have. When Bix sent that message [to Rael], I thought about what that meant and what it meant for her future, Cassian’s future and the future of the galaxy itself. But it really lies more on Cassian than Bix, specifically. Bix is a little bit unaware of what she is actually getting herself into, but she’ll find out sooner or later. So I don’t think she’s exactly aware of what is happening or the connection to what is about to happen, but she realizes it pretty quick, though.

Episode three ends in tragedy as Timm gets stitches and dies in front of Bix. Cassian also flees Ferrix with Luthen. It’s safe to say you’ll be back at some point, right?

I can’t tell you that. It would be wild of me to do that.

Wow, you’re good at this.

***
Andor’s three-episode premiere is now available on Disney+. This interview was edited for length and clarity.