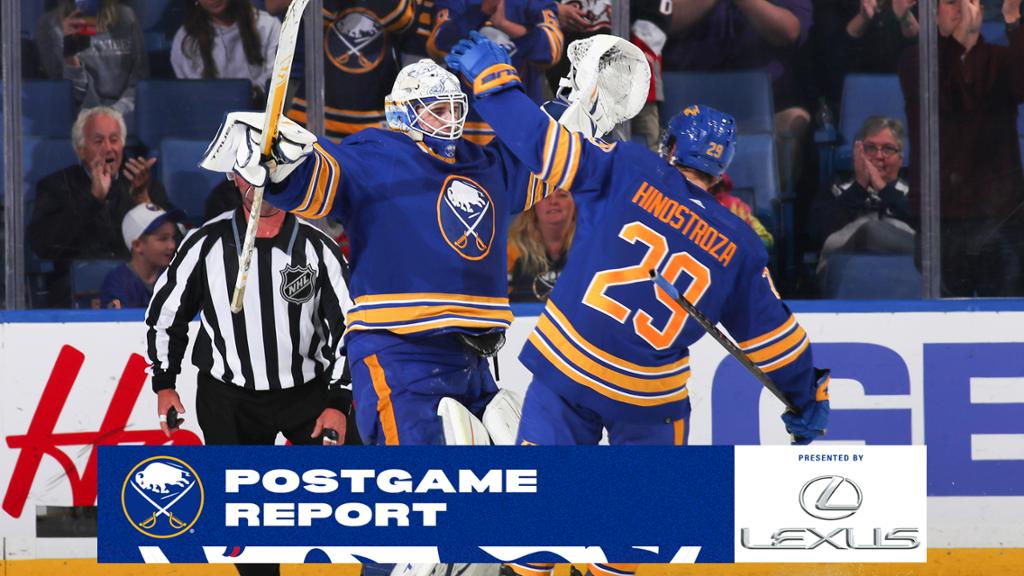 Cody Eakin offered up a new adjective to describe the 2-0-0 Buffalo Sabres after their shootout win over the Arizona Coyotes on Saturday.

Several descriptors have been thrown around since the team convened for training camp three weeks ago. Some players have used “relentless” to describe their preferred style under coach Don Granato. Veteran goalie Craig Anderson described the team as being young and naïve in its tireless approach.

“We are harder to play against,” Eakin said. “We are always playing with speed on the forecheck, the backcheck, and it just kind of gets annoying, I think, to other teams.

“Not that there’s a big number of games that we’ve showed it, but consistently play like that – just playing as a team with speed, moving pucks up, funneling back, really just cutting off their rush before it starts – we’re going to be hard to play against.”

The Sabres controlled the game more than the 2-1 final suggested. They finished with significant advantages in shots (33-21) and 5-on-5 scoring chances (23-11), according to Natural Stat Trick. They maintained possession for long portions of the 3-on-3 overtime period.

Coyotes goaltender Karel Vejmelka stopped 32 shots in his NHL debut to keep the Coyotes afloat until the shootout, which saw Tage Thompson and Arttu Ruotsalainen score goals for the Sabres.

The performance was marked by many of the same characteristics exhibited during Buffalo’s 5-1 win over Montreal on Thursday. Hard work on the forecheck led to long shifts in the offensive zone. When Arizona attempted to break the puck out, a forward was often there to join the defense on the backcheck and stifle the rush before it reached the red line.

“We do the job for each other and it’s easy to play,” said defenseman Rasmus Dahlin, who skated a game-high 25:21 of ice time. “We’re a tougher team, but it doesn’t feel like we’re putting in that much effort because we’re playing together. It’s easy to play when it’s fun.”

Dahlin set up Buffalo’s loan goal of regulation with a stretch pass through the middle of the ice, sending former Coyote Drake Caggiula over the offensive blue line with a step on two defenders. Caggiula sent a shot off Vejmelka and Eakin pounced on the rebound for his first goal of the season.

Eakin’s goal – scored during the dying seconds of a power play – erased a 1-0 deficit at 1:05 of the second period.

Granato preached patience as the go-ahead goal eluded them from that point on. They never wavered from their approach, earning an 11-0 edge in scoring chances during the final 20 minutes of regulation.

“The more you have the puck and you put the pucks in the right area, which makes it harder for teams to come back quicker and counter quicker against you, the better,” Granato said. “So, we did make more right decisions in those areas, which helped us limit how much defense we had to play.”

The Sabres have held opponents to two goals or less in their first two games for the first time since the 2008-09 season. They have received goals from six different players. They are winning in both areas of special teams, having started 4-for-8 on the power play and 6-for-6 on the penalty kill.

Granato spoke throughout training camp about the identity he hoped to see his young team establish. He wants them to be aggressive and confident in how they pressure the puck.

Annoying? He’ll take that, too.

“I love the fact that Cody said that,” he said. “If you can play and play hard, that’s a good characteristic to have. And if the guys embrace that, I’m all for it.”

Dustin Tokarski made 20 saves to earn the victory in his season debut for Buffalo. He allowed one goal on three attempts during the shootout.

Tokarski played 13 games with the Sabres last season after spending three years in the AHL. He parlayed that performance into a strong training camp, where he earned a roster spot over incoming veteran Aaron Dell and 22-year-old prospect Ukko-Pekka Luukkonen.

“Just to show that I can play a stretch of games at a high level, I’m not just a flash in the pan, that coaches and players can count on you when you’re in net is a big thing,” Tokarski said. “I was happy to have a decent stretch there.

“But it’s a new season, you have to come in and earn it. I’m happy to be here and pumped about the win.”

A defensive-zone faceoff with 11.9 seconds remaining in overtime offered a glimpse into Granato’s thinking when it comes to young players. Granato sent Tage Thompson – just a handful of games into his first stint as an NHL center – out for the draw.

Thompson finished the game with a 67-percent success rate on faceoffs, the best mark among Buffalo’s four regular centermen. But the move by Granato – who leaned on Dylan Cozens and Casey Mittelstadt as top-line centers last season – showed the coach is unafraid to put young players in high-leverage situations.

“If it’s Game 7 in a playoff series, you’re probably thinking something different,” Granato said. “All our guys need experience, they need situations. It’s the only way they’re going to learn.

“You don’t learn to swim and not get wet. So, we got to put them in situations with the confidence as a coaching staff that they’re going to be able to adjust and adapt.”

The Sabres continue their four-game homestand against the Vancouver Canucks on Tuesday. Coverage on MSG begins at 6:30 p.m. The puck drops at 7.