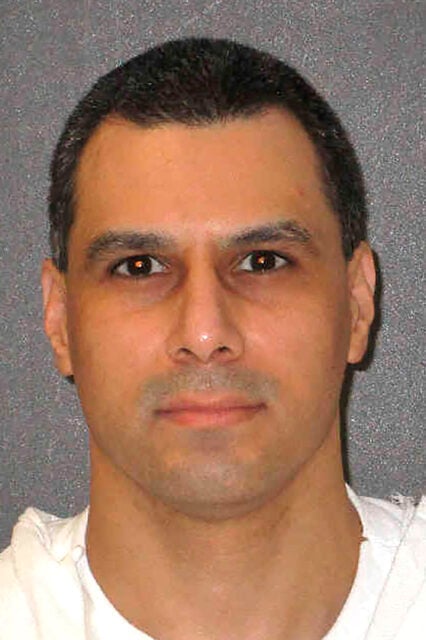 HOUSTON (AP) — Another Texas inmate has had his execution delayed over claims the state is violating his religious freedom by not letting his spiritual adviser lay hands on him at the time of his lethal injection.

Ruben Gutierrez was set to be executed on Oct. 27 for fatally stabbing an 85-year-old Brownsville woman in 1998.

But a judge on Wednesday granted a request by the Cameron County District Attorney’s Office to vacate the execution date. Prosecutors said the U.S. Supreme Court’s upcoming review of similar religious freedom issues made by another inmate, John Henry Ramirez, whose execution the high court delayed last week, will impact Gutierrez’s case.

“As the Ramirez matter may be dispositive of any issue related to Gutierrez’s religious liberty claim, it is in the best interest of the state, the family of the victim of Gutierrez’s crimes, that his execution be delayed,” prosecutors said in a motion filed Tuesday.

Gutierrez was previously an hour away from execution in June 2020 when the Supreme Court granted him a stay because his spiritual adviser was not allowed to accompany him in the death chamber.

Last month, Gutierrez’s attorneys filed a complaint in federal court alleging the Texas Department of Criminal Justice was violating his right to practice his religion by denying his request to have his priest touch his shoulder, pray out loud and perform last rites when he was executed.

Gutierrez, 44, said that these three things need to be done “to ensure my path to the afterlife,” according to his complaint.

His attorneys cited the Constitution’s First Amendment and a federal statute that protects an inmate’s religious rights. Ramirez made similar claims when he was granted a stay.

The Supreme Court has dealt with the presence of spiritual advisers in the death chamber in recent years but has not made a definitive ruling on the issue. That could change after it hears oral arguments in Ramirez’s case on Nov. 1.

Since then, the Supreme Court has delayed several executions over requests for spiritual advisers.

After the court halted Murphy’s execution, the Texas prison system banned all clergy from the death chamber. Texas previously allowed state-employed clergy to accompany inmates, but its prison staff included only Christian and Muslim clerics.

In April, the Texas prison system reversed its two-year ban. The new policy allows an inmate’s approved spiritual adviser to be in the chamber, but the two cannot have any contact and vocal prayers are not allowed during the execution. Texas prison officials say direct contact poses a security risk and vocal prayer could be disruptive.

Robert Dunham, executive director of the Death Penalty Information Center, said the Ramirez case is an opportunity for the Supreme Court to determine if inmates have the right to a spiritual adviser in a death chamber and if so, what is permitted in exercising that right.

“The fact this case can provide the court with an opportunity to lay out a blueprint for what is and what is not acceptable, that’s not a guarantee that they’ll do it,” said Dunham, whose group takes no position on capital punishment but has criticized the way states carry out executions.

If the Supreme Court doesn’t provide clear guidance, this issue will continually come up, Dunham said.

Gutierrez has long maintained he didn’t kill Escolastica Harrison during what prosecutors say was an attempt to steal more than $600,000 that the elderly woman had hidden in her home.

His attorneys have requested DNA testing they say could point to the real killer.

Prosecutors have said that request is a “ruse” and that Gutierrez was convicted on various pieces of evidence, including a confession.