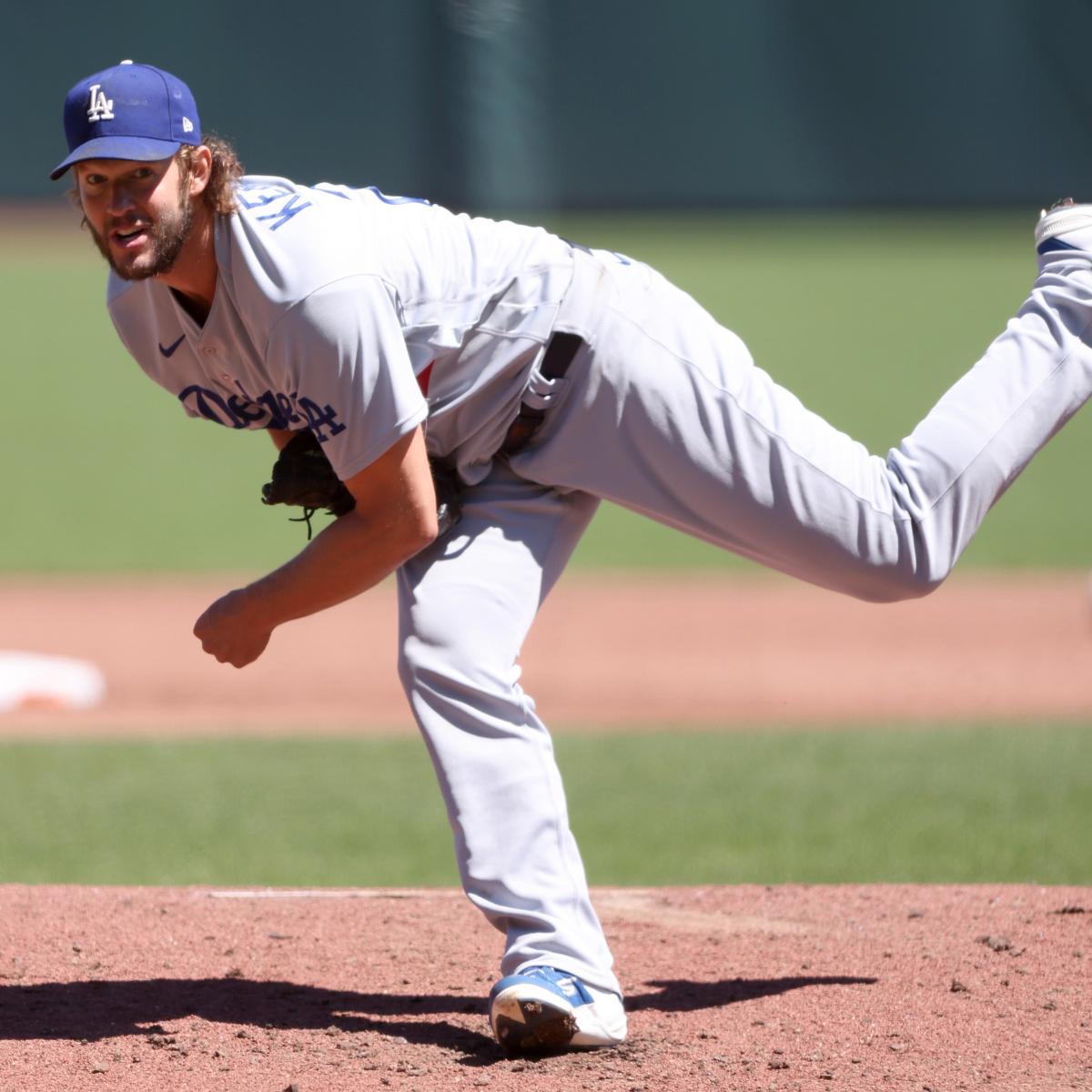 After a disappointing NLCS exit, the Los Angeles Dodgers could be in for an offseason of change.

Familiar faces Corey Seager, Clayton Kershaw, Kenley Jansen and Chris Taylor are all free agents, as is deadline pickup Max Scherzer, and keeping all five of those guys seems unlikely even with the team’s spending power.

There is also a big decision to make on the future of Cody Bellinger after he struggled mightily in 2021.

With the start of another long, cold offseason right around the corner, it’s worth taking a closer look at the biggest questions facing a Dodgers team that has the spending power to reshape the MLB landscape with the decisions it makes this winter.

Question: Will Cody Bellinger be tendered a contract?

Just two years removed from winning NL MVP honors, Cody Bellinger was one of the least productive players in baseball during the 2021 season. He hit .165/.240/.302 for a dismal 45 OPS+ that ranked 260th out of 262 hitters with at least 300 plate appearances, and his minus-1.5 WAR made him one of the least valuable players in the entirety of the sport.

Since he won his MVP award prior to being arbitration-eligible for the first time, he received a record $11.5 million in his first year of arbitration, and that climbed to $16.1 million in 2021.

Even if the Dodgers were to push for a pay cut—which is extremely rare—a player’s salary can only be slashed by 20 percent during his arbitration years. That would still mean a $12.9 million salary figure for the 2023 season. In all likelihood, a matching $16.1 million salary is what it’s going to cost to retain Bellinger for another year.

He went 7-for-17 in the NLCS and hit a game-tying, three-run homer in the eighth inning of Game 3, but is that enough to cancel out five months of substandard production?

The smartest approach would be to non-tender him with the hope of re-signing him to a new deal at a lower price point. That’s what the Chicago White Sox did with Carlos Rodon last offseason, and it’s been done countless times before. That would mean exposing him to free agency and opening the door for someone else to swoop in with a better offer, but that’s a risk worth taking.

The deadline to tender contracts for arbitration-eligible players is Dec. 1.

Question: Is Kenley Jansen part of the team’s future plans?

With a $20 million salary in 2021, closer Kenley Jansen was the fourth-highest-paid player on the Dodgers roster and the highest-paid relief pitcher in all of baseball.

It will be interesting to see what sort of market awaits him this offseason now that he has played out his five-year, $80 million deal and will be entering his age-34 season.

After losing his hold on the closer’s role during the 2020 postseason, Jansen rebounded by converting 38 of 43 save chances this year with a 2.22 ERA, 1.04 WHIP and 11.2 strikeouts per nine innings in 69 appearances.

However, he also issued 4.7 walks per nine innings—his highest total since his rookie season in 2010—and he has reworked his approach as his trademark cutter has become less effective, throwing more sinkers and sliders than ever before.

With Blake Treinen signed through 2023 and capable of closing games, and young relievers Brusdar Graterol, Phil Bickford, Alex Vesia and Victor Gonzalez controllable for multiple years, the Dodgers have a good bullpen core in place.

They stand to lose Corey Knebel and Jimmy Nelson in free agency and have a $12 million club option on Joe Kelly that will likely be declined, but they could conceivably let all of those guys and Jansen walk and still have a solid relief corps.

A two-year, $20 million offer seems like fair market value for Jansen. Make that offer, be happy if he accepts it and move on if he doesn’t.

Question: Will there be any long-term extensions handed out?

The Dodgers have made it a point to retain their own top free agents in recent years, and they also signed Mookie Betts and Max Muncy to multiyear extensions before they reached free agency.

They have a number of more pressing matters to attend to, but shortstop Trea Turner and right-hander Walker Buehler are both prime candidates to discuss a long-term extension with this winter.

Turner has one final year of arbitration remaining in 2022 before he hits the open market, and if the plan is to let Corey Seager walk this offseason, locking up Turner would have to be a top priority.

Neither player will come cheap, but both are vital pieces of the team’s long-term plans. It would be beneficial to at least get the ball rolling on extension talks this spring.

It was alluded to in the last slide, but the trade deadline deal to acquire Trea Turner from the Washington Nationals seemed to come with some unmistakable writing on the wall that Corey Seager’s days in a Dodgers uniform were numbered.

Even the deep-pocketed Dodgers can’t keep everyone, though.

A middle infield of Gavin Lux and Turner could still be among the league’s best, especially if Lux can build off his strong offensive finish to the year. The 23-year-old hit .360/.467/.500 in his final 60 plate appearances, and he is controllable all the way through the 2026 season.

Given his age and production, Seager could command a deal in the ballpark of the 10-year, $300 million deal Manny Machado signed with the San Diego Padres. It’s difficult to fit that type of commitment into the Dodgers’ long-term picture if Turner is going to be sticking around.

Let him walk, take the draft pick and hammer out a long-term deal with Turner.

Question: How much is too much for Chris Taylor?

A big reason Enrique Hernandez walked last offseason was to pursue an everyday role, something he had not been afforded during his time with the Dodgers and could not be promised in 2021. He ultimately signed a two-year, $14 million deal with the Boston Red Sox and produced a stellar 4.9-WAR season.

For a Dodgers team that values defensive versatility as much as any club in baseball, losing Hernandez and fellow Swiss Army knife Chris Taylor in consecutive offseasons would be a tough pill to swallow.

Taylor, 31, was an All-Star for the first time this season while playing double-digit games at five different positions and hitting all over the Dodgers lineup. He posted a 110 OPS+ with 25 doubles, 20 home runs, 73 RBI, 92 runs scored and 13 steals in 14 attempts, and beneath the surface he slashed his strikeout rate from 28.7 percent to a career-low 20.9.

For an encore, he hit a walk-off home run in the NL Wild Card Game and had a three-homer game in Game 5 of the NLCS.

With his arrow pointing straight up and his versatility making him a fit on any team in baseball, the market for his services is going to be robust, and the four-year, $56 million deal that Ben Zobrist signed when he joined the Chicago Cubs looks like a reasonable starting point in negotiations.

He is as indispensable as any player on the Dodgers roster, and the front office should be ready to meet or exceed any offer within reason that he gets on the open market this winter. If that means going to a fifth year or eclipsing $15 million annually, so be it.

Question: How will the Trevor Bauer situation be resolved?

On July 2, the Dodgers placed Trevor Bauer on seven-day administrative leave following allegations of sexual assault. That leave was extended multiple times and ultimately through the end of the 2021 postseason, but a decision on his future will need to be made at some point this offseason.

“Regardless of whether Bauer is charged with a crime, sources around the sport told ESPN they expect the league to levy a significant suspension against the 30-year-old. Further, front-office officials question not just whether the reigning National League Cy Young Award winner will return to the field with the Dodgers but whether any team in MLB will be willing to roster him after multiple women have accused him of abuse.”

The Dodgers will owe Bauer $35.3 million in 2022 if he decides to opt into the second season of the three-year, $102 million deal he signed last offseason, though a suspension would impact his pay. However, beyond the financial commitment and any potential suspension is the question of whether he would be welcomed back to the Dodgers locker room.

Passan wrote: “Inside the Dodgers clubhouse, they’ve more or less moved on. … That said, there was a distinct pocket of veterans on the team who didn’t want Bauer anywhere near them again. There was also a group of players who would have welcomed Bauer back. The players were not unanimous in their judgment, but if ever there’s a point at which Bauer tries to return, those in opposition are likely to make their voices heard louder than the rest.”

There is no sense speculating what a suspension could look like or if he’ll ever pitch for the Dodgers again, but there should be some clarity to Bauer’s future in Los Angeles this offseason.

Go ahead and pencil Walker Buehler and Julio Urias into spots in the Dodgers rotation in 2022. The other three spots…

Dustin May likely won’t be ready for Opening Day after undergoing Tommy John surgery in May, leaving Tony Gonsolin as the only clear in-house candidate for a spot. Veteran David Price would also be an option to return to a full-time starting role. That makes the decision on what to do with future Hall of Famers Max Scherzer and Clayton Kershaw in free agency the most compelling of the offseason.

However, a two-year, $74 million contract to make him the highest-paid pitcher in baseball is not out of the question. That would not be an overly risky move for a Dodgers team with money coming off the books in the short term.

Kershaw, 33, missed more than two months with elbow inflammation and wound up watching from the sidelines during the postseason while dealing with forearm discomfort. He was still effective when healthy, though, posting a 3.55 ERA, 1.02 WHIP and 144 strikeouts in 121.2 innings over 22 starts.

He just wrapped up a three-year, $93 million deal, which represented a minor pay cut relative to his previous contract. Another slight pay cut to something in the ballpark of a three-year, $75 million deal might be a good middle ground for both sides.

Unless other teams are willing to roll the dice on additional years, expect the Dodgers to do what it takes to keep both pitchers around for 2022.

All stats courtesy of Baseball Reference and FanGraphs.