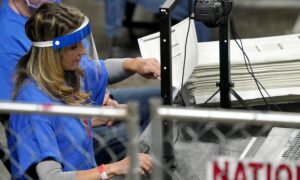 The Republican-controlled Arizona Senate isn’t voting to hold Maricopa County officials in contempt for refusing to fully comply with election audit subpoenas because of a single Republican senator.

Republicans lost a seat in the state Senate in the Nov. 3, 2020, election and hold a narrow 16–14 majority. That gives state Sen. Paul Boyer, a Republican, the power to stymie efforts to hold the county’s Board of Supervisors (BOS) in contempt.

“Senator Boyer agreed to proceed with [the] audit but when Maricopa BOS refused to cooperate, Boyer would not vote with us for the resolution of contempt which leaves us one vote short,” Arizona Senate President Karen Fann, a Republican, wrote in a July 21 social media post.

Boyer, who didn’t respond to requests for comment by press time, responded directly to Fann.

“You told us in closed caucus the ‘audit’ would not cost taxpayers more than $150k, and you wouldn’t divulge who you were hiring. Had you told us it was an inexperienced, partisan firm, I wouldn’t have been the only one to object,” he said.

Democrats and other critics have said that Cyber Ninjas isn’t qualified to perform such an audit because the firm lacks experience conducting audits and because its CEO, Doug Logan, shared and made posts on social media last year alleging election fraud had occurred in the Nov. 3, 2020, election. Proponents and Republicans have said the firm has created a transparent process for an unprecedented election review and that the subcontractors have ample experience.

On the issue of funding, taxpayers are only paying $150,000. Donations are funding the rest of the audit.

Senators voted in February on a measure to hold the BOS in contempt for failing to comply with subpoenas issued by the state Senate in late 2020.

Supervisors “have repeatedly and willfully delayed and obstructed a vital and duly authorized investigation by the Arizona Senate,” the resolution stated.

The measure would have enabled the Senate to send the sergeant-at-arms to arrest the supervisors.

The vote went along party lines, except for Boyer, who sided with Democrats. That made the vote 15–15.

“My vote is about patience,” Boyer said, noting that it would provide “a little bit more time for us to work together charitably and amicably as friends.”

The standoff between county and state officials ended later that month, when a judge ruled against the county, saying the subpoenas the Senate issued were valid.

County supervisors agreed to turn over nearly 2.1 million ballots, 385 tabulators, and other election-related materials, but have refused to send over router or router images and passwords to access the election machines at an administrative level.

Auditors want that information, as well as ballot envelope images and splunk logs, to try to clear up issues they’ve identified in their review. The county isn’t cooperating, however.

“Every time I’ve tried to interact with the folks at the Elections Department, I’ve been told that I need to deal with the county attorney’s office. And most of that time I’ve received kind of the answer that ‘we gave you everything we’re going to give you,’” Ken Bennett, a former Republican Arizona secretary of state who is serving as the state Senate’s audit liaison, told a hearing last week.

If the materials and information sought aren’t handed over, “it will be an incomplete audit,” Republican state Sen. Warren Peterson said.

“It is unfortunate that the county has been recalcitrant. That doesn’t breed trust. It slows things down. It makes things difficult.”

A county spokesman told The Epoch Times in an email that the county wouldn’t hand over more material without fresh subpoenas.

“We will have a response about other demands if and when Senate leadership produces more subpoenas,” the spokesman said.

Members of the BOS grew upset in May after Fann conveyed findings from auditors, including that there appeared to be a database on the election management software that was deleted. The county called for an end to the audit.

For now, the Senate won’t attempt to hold the county in contempt. It also backed off a plan to issue more subpoenas.

Asked what people can do, Bennett told radio host James Harris that they can call the BOS and ask that they “be more cooperative.”

“That feels a little weak, but that’s kind of where we’re at,” Bennet said.