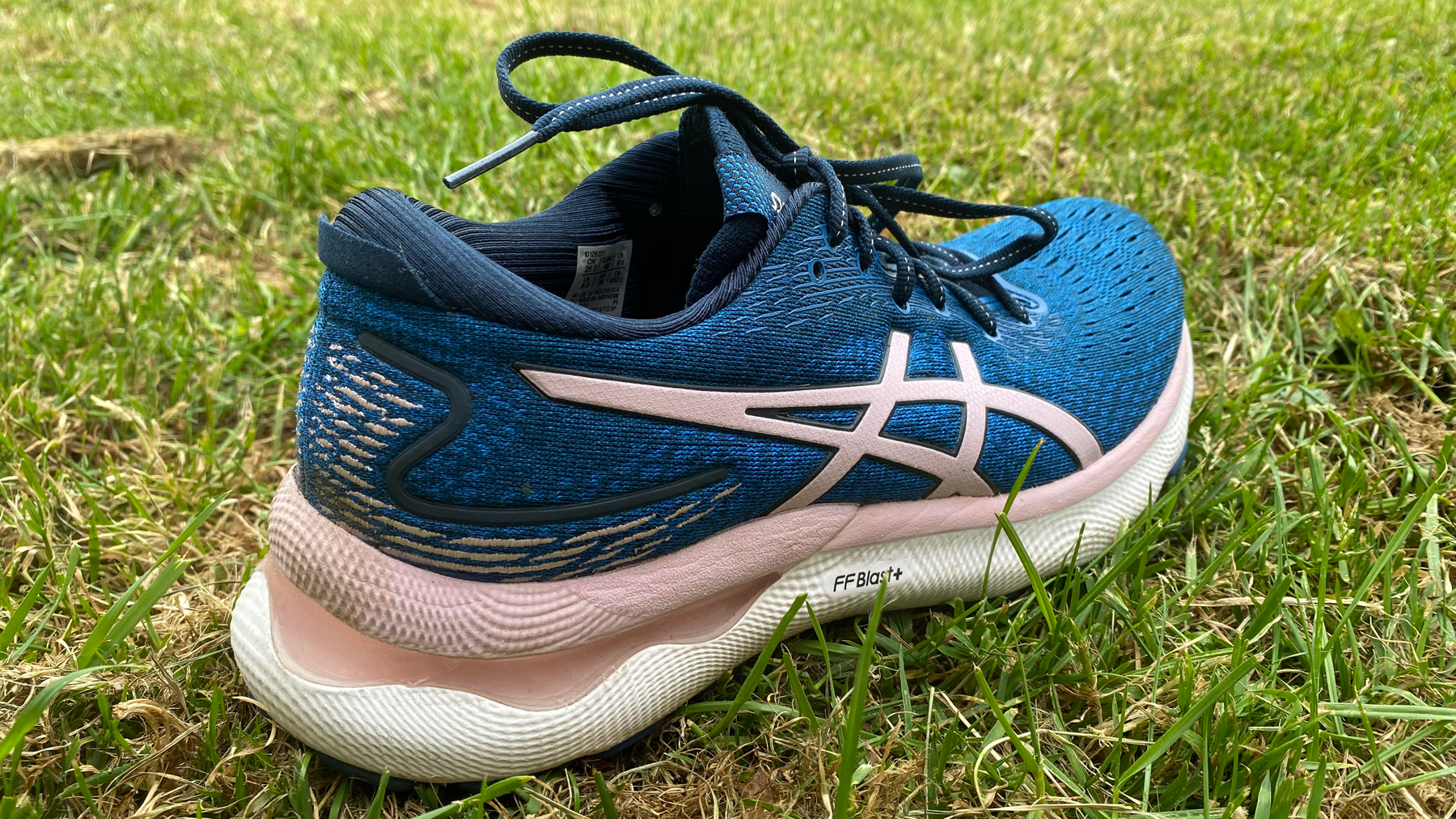 The Asics Gel Nimbus 24 is a versatile shoe for running. If you’re looking to conquer your first 5k, train for longer distances or just have fun with running, this trainer offers comfort, cushioning and support.

If you’re a fan of the Asics Gel Nimbus shoe then you’re going to want to hear how the updated version measures up. The Asics Gel Nimbus 24 has undergone a few changes, including a new upper, midsole, and outsole making the shoe a stable, supportive and comfortable shoe to wear while racking up the miles.

Its new Trusstic technology (under the foot arch) prevents the foot from twisting as you step, which is good news for overpronators. The shoe also features a new FF Blast+ foam in the midsole making it a more-responsive ride which we took advantage of on our longer runs during testing.

The Gel Nimbus 24 weighs in at 10.2oz (290g), this is 0.7oz (20g) lighter than its predecessor the Nimbus 23. This helps your runs feel effortless but it’s only fair to point out that there are lighter distance shoes on the market.

However, the thing we most enjoyed about this shoe is its versatility. While it may not look as exciting as some of the stylish and bolder running shoe designs, it delivered consistently, whatever the run or terrain.

To give the Gel Nimbus 24 a good run, we tested them out across four different runs and routes. Our first was a 5K on a typical city pavement. The middle two runs ranged between 5k and 10K and involved a mix of pavement and trail, and the final run was a longer, recovery run around a large grassy park.

We found the shoe responsive and enjoyable to run in for short, middle, and long distances. We were predominantly city-based while testing the Nimbus 24s and can confirm it responds well on these surfaces. Despite feeling the odd slip under the feet on wetter areas of concrete we experienced no issues. Though we had less trail experimentation, we can’t see why this shoe wouldn’t be well-suited to a mixture of outdoor terrains.

We tested the women’s Asics Gel Nimbus 24, which has a 13mm drop, while the men’s has a 10mm drop. This is a high drop but anyone who lands heel first when they run will benefit from this most. We liked this higher drop as it contributed to a softer landing and helped with creating a good level of motion while running.

One of the more notable changes applied to the Nimbus 24 is the new FF Blast+ midsole foam. The Japanese shoe company claims this technology should make the shoe 15% lighter, 15% softer, and 12% bouncier than the already bouncy FF Blast Foam used for the Novablast 2s. For us, this new midsole gave the shoe flexibility and it had a lot of energy to offer. We felt like we could run fast when we wanted to and nothing held this back.

If you prefer a running shoe with less structure to it then you may not fall head over heels by the feel of the Nimbus 24. The new Trusstic tech sits nicely under the foot arch. This is a feature usually put in place for overpronators. However, the 24s are a neutral shoe and we’d agree with this. We think it’s a solid in-between shoe for runners who like extra support but don’t want to feel tied to buying a shoe just for stability.

In its design, the shoe has no stand-out features, though it is a good-looking trainer. We tested the navy and pink versions, which were hard to pair with certain colors of running leggings but this is us being nitpicky.

We found the Nimbus 24 to fit true-to-size, but if for any reason you are worried about room, the engineered mesh upper not only adds comfort but it’s nice and stretchy.

The Nimbus 24 has had a revamp to its tongue. Feeling less plush for us during testing, the new tongue is thinner and lacking some padding. On the first run, we didn’t like the thin feel to it but it grew on us. The gusseted stretch knit tongue provides support and breathability. The slimmer design features flexible midfoot panels that offer better support and will be suitable for heel-strikers.

The bottom of the shoe consists of segmented Asics Lite rubber, and during our testing we got a good level of stability and durability from the outsole without sacrificing the shoe’s flexibility. However, there were two instances where the grip could have felt stronger while running at speed over wetter surfaces, especially running over soggy leaves that can be slippy.

For some, the outsole may feel like it has a thin layer of rubber for a daily running shoe, but we didn’t notice any quick wearing of the outsole or have issues with it. Although some areas of the outsole are more exposed, the Nimbus 24 features high-abrasion rubber in the rear and forefront of the trainer. We think the placement of extra durable rubber here should set this shoe up to be a long-serving pair of running shoes.

We found the Nimbus 24 fitted true to size and the spacious toe box means the shoe can accommodate thicker socks in winter. The stretchiness of the front foot area pairs nicely with some light compression, which we found good at locking down the forefoot while running. It’s a bonus when a running shoe not only fits well but also when it offers generous padding and cushioning. We liked the feel and comfort of the Nimbus 24 so much that we ended up using the shoe for daily wearing and to the gym.

The Asics Gel Nimbus 24 is a great daily trainer and one that experienced and beginner runners will have fun training in. It’s a light, cushioned and durable running shoe offering lots of comfortable mileage. If you want a shoe you can wear for faster-paced runs and longer, easier recovery runs then the Nimbus 24 is a great shout. The gusset tongue makes for a nice roomy fit and greater comfort while running. Despite the shoe lacking any form of rocker effect, it will endure through plenty of distance. Plus, any overpronators looking for a suitable running shoe can make the most of the new Trusstic tech, which helps the feet from twisting during a run.

The Asics Gel Nimbus 24 lacks any form of rocker and if this is a preference of yours, you may be better-suited to a Hoka running shoe.

The Hoka Mach 4 features a rockered sole to create that heel-to-toe roll, it’s about 2oz lighter than the Nimbus 24 and nice and cushioned for longer miles. Or if you’re looking to spend less on a daily training shoe but still find a pair that can endure longer runs, there’s the Brooks Trace running shoe. This is another lightweight option, suitable for mixed terrains and doesn’t exceed the $100 mark.

Jessica is a Staff Writer at our sister site Fit&Well. Her love for keeping fit and fueling her body with healthy and enjoyable food led her to write about all things fitness and health-related. If she isn’t out testing the latest fitness products such as the latest running shoe or yoga mat then she can be found on the Fit&Well news desk writing news and features on the best ways to build strength, active aging, female health, and anything in between. Before then she had a small stint writing in local news, has also written for Runners World UK (print and digital), and gained experience with global content marketing agency, Cedar Communications.