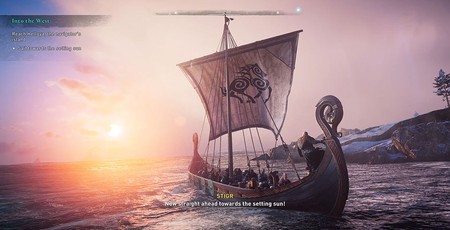 The Assassin’s Creed Discovery Tour series provides an attractive proposition in allowing folk to use their muscular PCs to explore real history within the elaborately crafted game world environments where the games are set. Previously, we have seen this style of immersive and educational content rolled out for Assassin’s Creed Origins (set mainly in Egypt, around 50BC) and Odyssey (Greece, about 425BC). In those cases the Discovery Tours were released as a sizable but free bonus for game owners, as well as separate downloads for those interested more in the history than gaming, and Ubisoft is following a similar MO with its most recent / current Assassin’s Creed Valhalla game (set around 875AD). Assassin’s Creed Discovery Tour: Viking Age is being made available from 19th Oct 2021, a little over a month away. As people now expect, it will be free to owners of the main game, as a juicy piece of downloadable content. Owners of the game on PS4, PS5, Xbox One, Xbox Series X/S, PC, Amazon Luna, and Stadia will have access to this Discovery Tour from that date.

So, what do you get with the new Discovery Tour? You can see a brief overview in the ‘Upcoming Content Recap’ video, embedded above, starting from about 3mins and 25sec in. In summary, Ubisoft has created character quests this time, rather than use a guide format, and following these quests you will learn about the places, people, and cultures of ninth-century England and Norway.

Museum partners such as the UK’s Hampshire Cultural Trust, Preston Park Museum & Grounds, York Archaeological Trust, and The British Library; France’s Réunion des Musées Nationaux; and the National Museum of Denmark have all had a hand in helping create accurate and illuminating educational content. If you are one of the folk who would rather not buy the game, and are only interested in the Discovery Tour, it will be available as a standalone title for PC starting from the same date (19th Oct). However, Stadia, Amazon Luna, PS4, PS5, Xbox One, and Xbox Series X/S gamers will have to wait until “early 2022” for the same paid-for privileges.

Ubisoft has already launched traditional gaming expansions for Assassin’s Creed Valhalla this year, in the shape of The Siege of Paris (set in France, released last month) and Wrath of Druids (Set in Ireland, released in May).