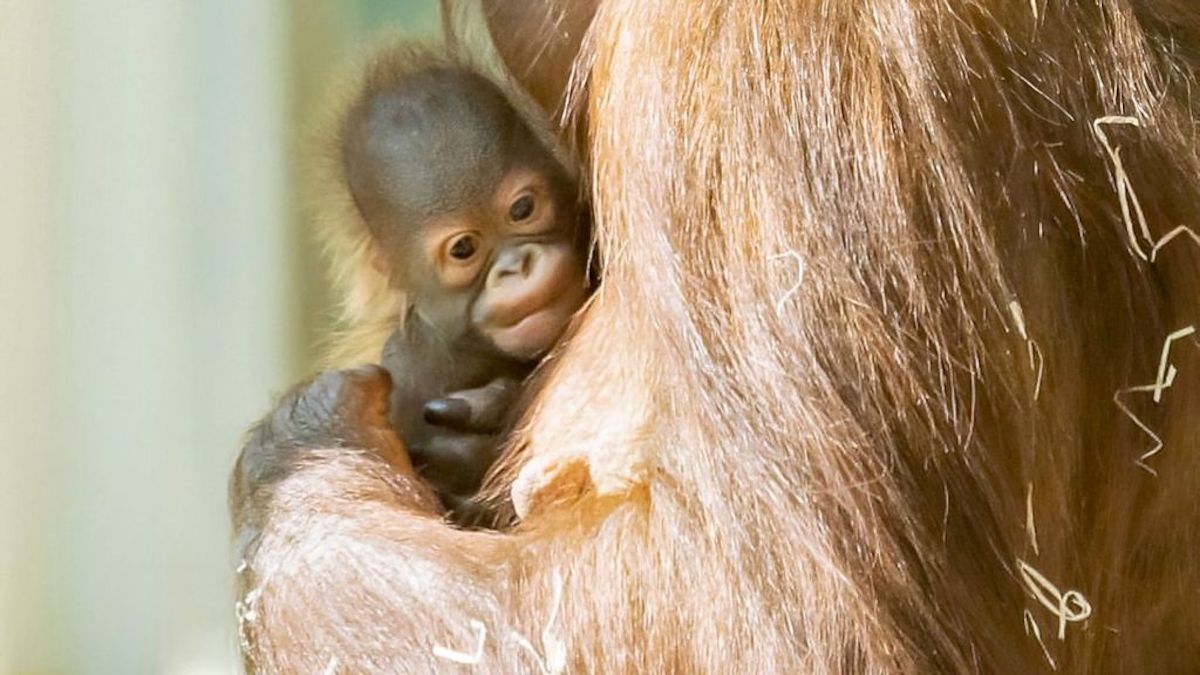 Astonished wildlife fans watched the live birth of a baby orangutan in a once-in-a-lifetime moment at a zoo’s special enclosure.

The heartwarming experience – witnessed live by a lucky few – is now being shared in extraordinary video footage of the event.

In one amazingly intimate moment, the pair can be seen nuzzling each other before mom Sari kisses her newborn on the nose.

At the start of the footage from Vienna Zoo in Austria, Sari can be seen easing the baby through its last moments of birth. As the exhausted youngster emerges, mom Sari helps the baby recover and they stare into each other’s eyes.

Then the pair take a well-earned break, laying back in the straw before venturing outside into their enclosure.

Proud mom Sari protectively keeps her newborn close to her chest as she walks carefully around the space.

In one heartwarming scene, mom and baby nuzzle and kiss as they stop for a rest during their walk in the sun.

Fans who were at the enclosure were allowed to watch the birth through thick security viewing windows.

Zoo spokeswoman Corinna Buergmann confirmed that the birth took place in front of an audience.

She told Zenger News: “Sari gave birth in the indoor part of the orangutan enclosure.

“The visitors who were lucky to be there when it happened had the unique opportunity to witness the birth through the protection glass.”

She added: “It seemed that Sari just felt comfortable where she was.

“We’ll leave it up to our orangutan caretakers to decide on a name. They will choose one after its sex has been determined.”

Zoo expert Folko Balfanz said: “Sari is 13 years old. She has lived here since 2020 when we got her from Dublin Zoo. It’s her first child.

“Sari is showing a lot of devotion in caring for the baby. It spends most of the time sleeping in her arms.”

The expert added that the child’s father – 48-year-old Vladimir – and all the other members of the zoo’s group of orangutans “are signaling interest in the baby.”

Balfanz pointed out that the upbringing was a primary task of the mothers in their troupe or congress.

“The social structure and atmosphere within the group has improved immensely ever since the two females Sari and Surya became a part of it when they relocated from other zoos around two years ago.

“We are extremely happy about the birth.”

The last successful birth of an orangutan at Vienna Zoo was in 2004 when female Maya was born.

Orangutans are great apes native to the rainforests of Indonesia and Malaysia. They are now found only in parts of Borneo and Sumatra.

Orangutans can live more than 30 years, both in the wild and in captivity.

Considered to be among the most intelligent primates, orangutans use a variety of sophisticated tools and construct elaborate sleeping nests from branches and foliage.

Orangutans are a critically endangered species as human activities have caused severe declines in populations and ranges.

Threats to their populations include poaching, habitat destruction and deforestation and the illegal pet trade.

There have been several conservation and rehabilitation projects to ensure their survival in the wild.

Vienna Zoo’s official name is Tiergarten Schönbrunn. It was established in 1752 by the royal Austrian-Hungarian Habsburg Family.

The tradition-rich institution, one of Vienna’s top attractions for decades, is located in Hietzing district in the west of the Austrian capital.

The zoo registers around 2 million visitors each year and features more than 8,000 animals from 700 species on an area of 17 hectares (42 acres).