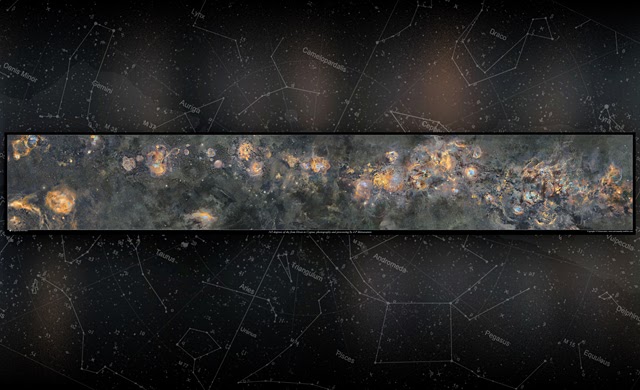 Grand Mosaic of the Milky Way is now large than ever

Last Spring I published a large mosaic photo of the Milky Way and it went viral!

I have now even a large version of it, the mosaic spans 145 degrees of sky from Orion to Cygnus, the previous version showed 120 degrees of sky.

at first time in the World.

The Grand Mosaic of the Milky Way Galaxy II
This is the only photo in the World showing the Northern Milky Way so deep and detailed, now it’s large than ever! 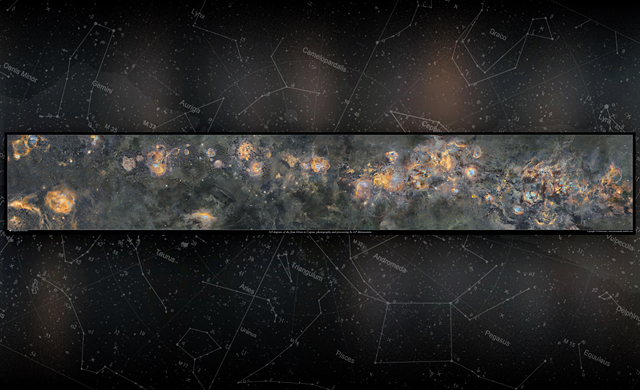 Over a decade, 1500 exposure hours and 301 individual frames visible in one image
NOTE, image of the Full Moon as a scale in lover left corner. 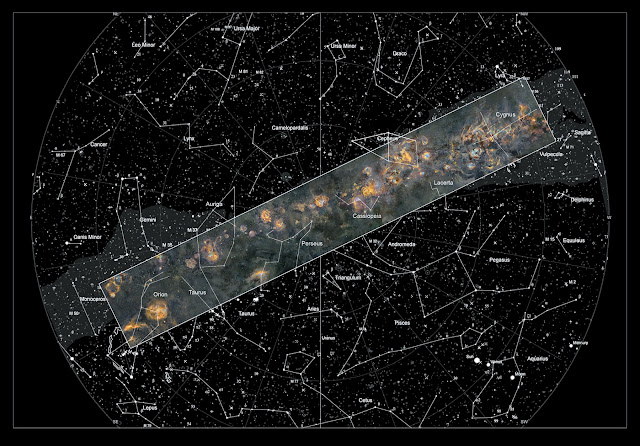 A zoom in series from upper left of the large panorama image above to gives an idea about the overall resolution of the large mosaic image. 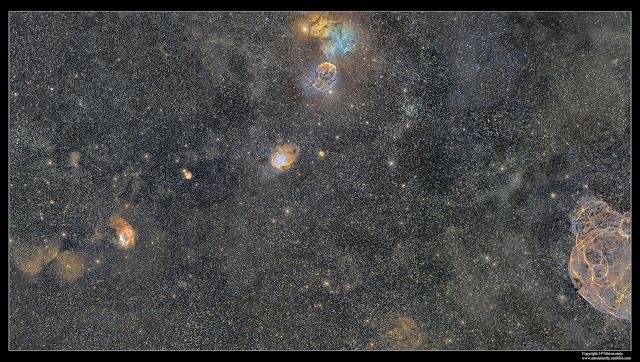 All the dots are stars, not the noise! 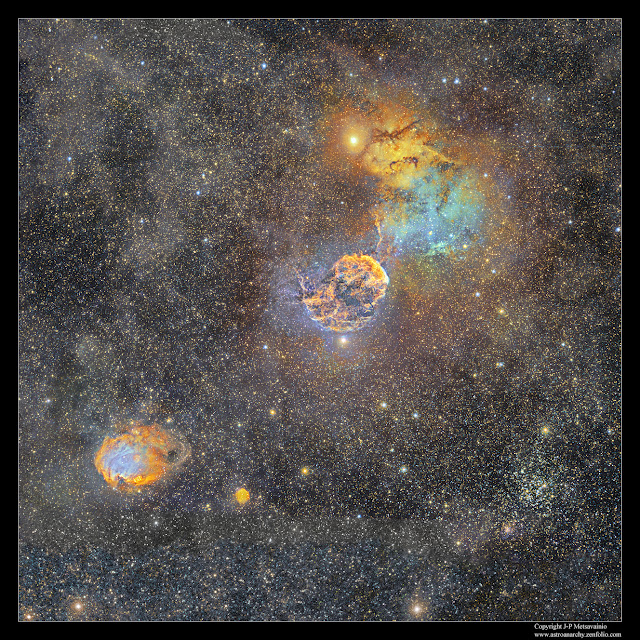 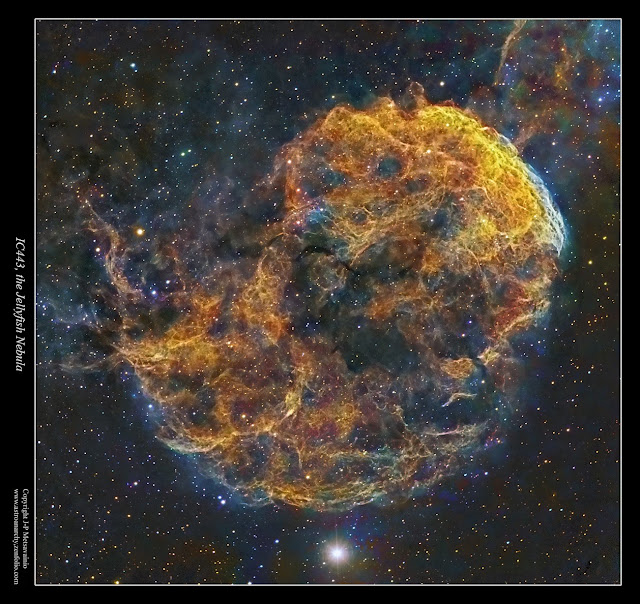 Closeup of the supernova remnant IC 443

There are several very dim and practically unimaged supernova remnants in this panorama.

The reason I keep doing my slow work is an endless
curiosity, I love to show how wonderful our world really is. That’s how I feel at front of
everything I’m able to see through my photography. This is my purpose as an artist. I have to
fulfil the demands of my passion – and I have done so for about 25 years.

Photographed area of sky is showing a
large part of Northern Milky Way in high resolution. Beside the size, it’s very
deep, meaning that it shows extremely dim and unimaged nebulae across the
galaxy plane. One of the reasons for this massive
panorama project was a fact, that there was no such an image anywhere in
the world.  I had personal need for the photo like this since I wanted to
use it as a map to the new adventures.

Revealing the hidden beauty of our universe is
my passion. I stand in rapt adoration before all that I see. When art meets
science, the results can be quite mind-blowing.

Astronomical
photography is a very time-consuming process. If I want to have a color image,
I have to shoot each target least three times through a different filter to
have all three-color channels needed for color image. Also, the exposure times
can be very long, in my case even hundreds of hours for some very dim
objects. An average exposure time is around 25 hours per image. Also everything has
to be carefully pre planned.

I made imaging plans over ten years ago, I
wrote first ideas about this imaging project to my little black Moleskin
notebook. I was aware at the time, that it will take a decade to be
finalized but it doesn’t bother me since I love long projects, they are
giving a purpose and the goal to my work as an artist. 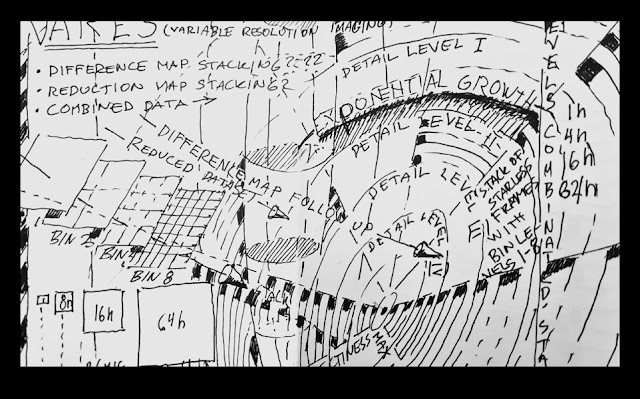 A notebook page opening from Autumn 2008

I needed to develop many new working
methods to be able to control this massive project. I needed to get them ready
first since ones started, the project can’t be changed anymore without
canceling it. Everything needs to be spot on, the planning of composition and
its relation to the Milky Way objects, many technical aspects, like how to
handle a data from different optics with a different spatial resolution etc. I
won’t go very deep into technical details, since the complex technique needed
is just a tool to make my art. 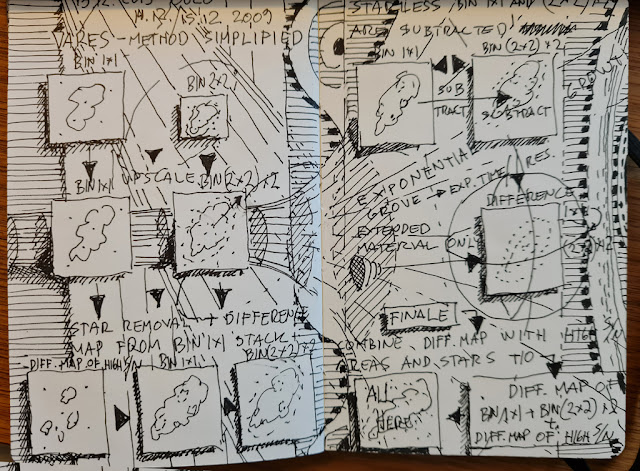 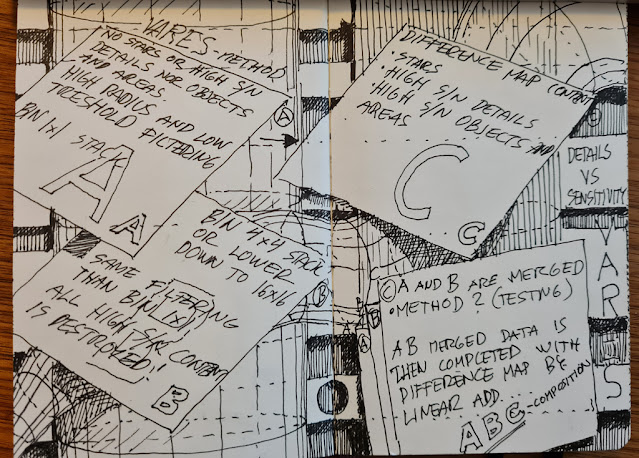 I like to compare my long imaging projects to a relationship. This project was like that too but not just between two entities. This is like a relationship with the whole family, a large Klan. There might be a nasty drunk uncle or other difficult persons in a family but
you must be able to get along with them too. I felt like that, when I was stitching pieces
together and some of them didn’t fit the way I wanted and I had to reshoot them. That easily took months, or years. but at the end, everything slides together smoothly without any visible seams.

I’m a perfectionist, when dealing with my photography. This feature is essential for the great results but it also can cause problems. This photo could be ready maybe five years earlier, if I could leave some extremely dim targets out or leave them less detailed but I simply couldn’t do that. When the photo was ready, I didn’t remember all of those sleepless cold nights, I remembered the joy I felt when the most difficult parts got ready. 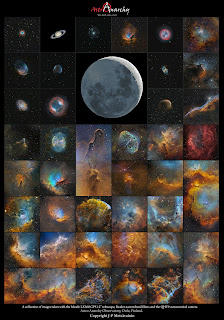 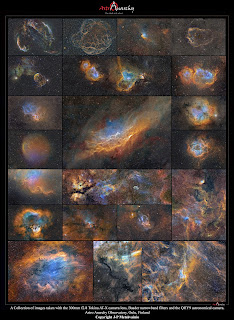 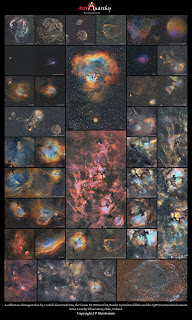 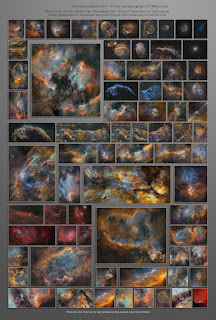 Some of my individual photos shot between 2009 and 2021 are collected here. Most of them are now part of the Large Mosaic Image of the Milky Way galaxy.

Finally at 2019, after so many years, I had enough material to start
working with the final mosaic image. The work took about two years due to
complex mosaic structure and massive amount of image material. I also
needed to shoot lots of missing material for the mosaic at the same time.

I used the Cartes du Ciel, a star map software, for planning and a
preliminary fit the individual frames. 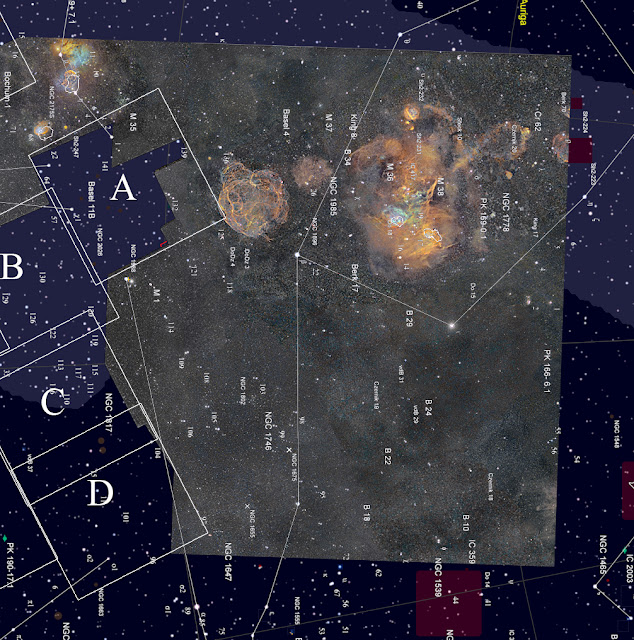 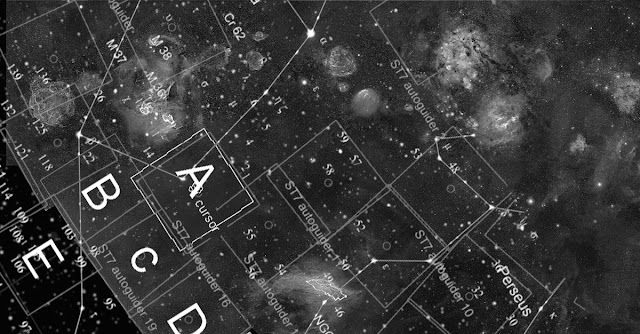 EVOLUTION OF THE LARGE MOSAIC 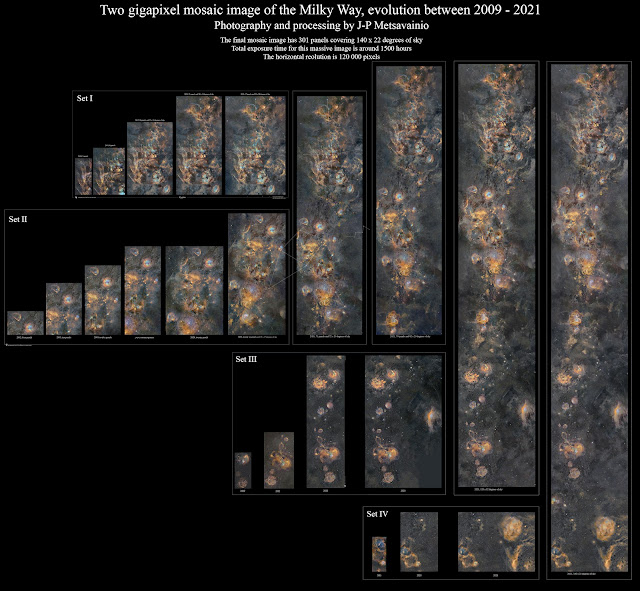 This image collection show the evolution of my Large Mosaic of the Milky Way Galaxy.

ALL THE PIECES OF A

The final photo is over 120 000 pixels wide and it has 301 individual mosaic panel. Most of the objects are originally shot as a self-standing artworks, due to that, they
are in various positions and angles to each other. This is the reason, why the
final mosaic structure looks so complicated, as can be seen in this image.

At October 2021, after 12 years, 1500 hours of exposures and countless hours of workThe Grand Mosaic of the Milky Way Galaxy II

Getting to a last piece of the puzzle is always a thrilling process. Many
of us know, how frustrating it can be to notice, that one piece is missing. That’s
happened to me too. I was sure that I shot the piece about three years ago
but couldn’t find it anywhere from my hard drives. As a result, I had to wait
several extremely long weeks to be able to reshoot the missing piece to get
this massive puzzle finalized.

I have shot many details with a longer focal length, before 2014 by using Meade 12″ scope with reducer and after 2014 Celestron EDGE 11″ and reducer. Quider camera has been Lodestar and Lodestar II.

I took my current toolset as a base tool since it has a relatively high resolution combined to a very large field of view. Also it collects photons very quickly since it’s undersampled and I can have very dim background nebulosity visible in very short time (many times 30 min frame is enough)

I do all my mosaic work under the PhotoShop, Matching the separate panels by using stars as an indicator is kind of straight forward work. My processing has become so constant, that very little tweaking was needed between separate frames, just some minor levels, curves and color balance.

I have used lots of longer focal length sub-frames in my mosaic to boost details. (See the mosaic map at top of the page) To match them with shorter focal length shots I developed a new method.

Firstly I upscale the short focal length frames about 25% to have more room for high resolution images.Then I match the high res photo to a mosaic by using the stars as an indicator. After that I remove all the tiny stars from the high res image. Next I separate stars from low res photo and merge the starless high res data to a starless low res frame. And finally I place the removed low res stars back at top of everything with zero data lost. Usually there are some optical distortions and it’s seen especially in a star field. Now all my stars are coming from a same optical setup and I don’t have any problems with distortions. (I’m using the same star removal technique as in my Tone Mapping Workflow)