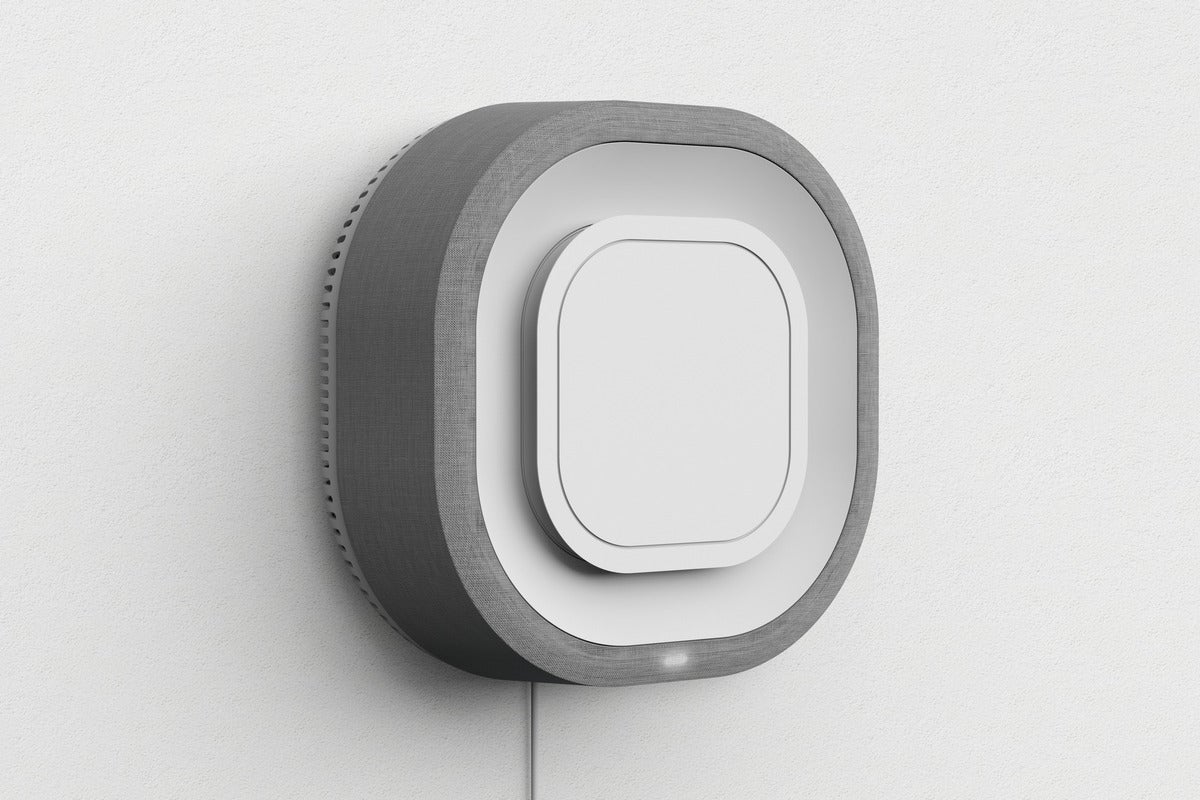 The Aura Air air purifier takes a decidedly different approach to scrubbing your home air of airborne pollutants and odors. Unlike competing products that typically sit on the floor, the Aura Air mounts to your wall. And rather than filter air by pulling it through one side of a square or rectangular filter and exhausting out the other, the Aura Air sucks air through a circular filter and exhausts it in all directions.

It sounds like a great idea, and the Aura Air does have several strong features. The problem is that it trades air pollution for noise pollution: It’s extremely loud, even at its quietest setting.

This review is part of TechHive’s coverage of the best air purifiers, where you’ll find reviews of the competition’s offerings, plus a buyer’s guide to the features you should consider when shopping for this type of product.

A fan at the back of the Aura Air draws air through an intake at the front, where a polymer mesh pre-filter traps large airborne particles such as dust and pollen. The air then passes through a round filter—Aura calls it the Ray Filter—which consists of three layers: a HEPA filter, an activated carbon filter to absorb odors, and a cotton fabric filter impregnated with copper oxide to destroy bacteria and neutralize viruses, fungus, and mold.

Aura says an ultraviolet-C (UVC) LED inside the Aura Air kills bacteria, viruses, and parasites that get trapped in the Ray Filter filter, and the FDA concurs that UVC light is effective for this purpose, although this document reports that as of February 1, 2021, “there is limited published data about the wavelength, dose, and duration of UVC radiation required to inactivate the SARS-CoV-2 virus;” that’s the virus that causes COVID-19 disease. Finally, bipolar ionization technology creates positively and negatively charged oxygen ions that can remove airborne pollutants. Where ionizer-based air purifiers can produce high levels of ozone, Aura says its device produces very low levels of that harmful molecule.

I asked the company to provide CADR (Clean Air Delivery Rate) numbers for tobacco, cooking, and fireplace smoke; for dust; and for pollen, but a representative provided only a single “estimated” CADR of 203, with the qualifications that “this is still being tested” and that the unit’s “max air flow is 350m3 per hour.”

A collection of sensors inside the Aura Air monitor the quality of air in the room in which it’s installed, and the air purifier uses this information to determine how hard it needs to work. Once you connect the device to your Wi-Fi network, this information is also reported to the Aura Air app on your mobile device (the app is available for Android and iOS). The app is generally well designed, apart from the fact that it presents virtually no useful information on its homepage. It displays a thumbnail image of the air filter with the remaining lifespan of the Ray Filter beneath that. You must drill down into the app to get any more useful information.

The outdoor AQI is based on the EPA’s national air quality standards and reports on the same pollutants as the indoor AQI, plus the levels of nitrogen oxide (NO2), ozone (O3), and sulfur dioxide (SO2). Both indexes scale from 0 (excellent) to 500 (hazardous). The app provides helpful descriptions of these pollutants, including their impact on human health.

In the “general” category, for example, the app suggests “refraining from exposure to heavy traffic, smoke, busy roads, polluting factories would be best for your long-term health.” The “heart” recommendation, meanwhile, duplicates this advice, adding only that you should “ensure personal medication is readily available and seek medical advice, if necessary.” Clicking on “allergens” delivered a terse “No info,” “grass” displayed a five-element line graph labeled “very high,” “dust” showed a similar graph labeled “very low,” and “germinales” simply said “off season.”

Another swipe left brings up much more useful information from the Aura Air’s own sensors: Precise levels of the airborne pollutants that comprise the indoor and outdoor AQI indexes. You can tap on any of these outdoor stats to get a precise reading, but doing this with the indoor stats displays the reading for just a second or two before switching back to VOC levels. I suspect this is a bug in the app, but it’s not a particularly annoying one.

A final swipe left brings up a very simple and oddly organized weekly weather forecast. Looking at it on a Thursday afternoon, the forecast started with Tuesday’s weather and ended with Monday’s (only the forecast high and low temperatures are reported).

The Aura Air can operate in four modes: silent, low, high, and auto. I used the auto setting for most of this review, which automatically changes operating modes according to the registered indoor AQI. Because the device is so loud, I also enabled night mode. Set the times you typically go to bed and wake up and the Aura Air will turn off its LED indicator and run as quietly as it’s able—which is not all that quiet.

I used the Audiobel app on my iPhone 12 to measure the ambient noise level. I used my 350-square-foot master bedroom as the test space (the Aura Air is rated for a maximum room size of 600 square feet). Audiobel reported ambient noise level four feet from the wall where device would operate to be 39dB.

With the air purifier in auto mode and reporting air quality as “good” (specifically, an AQI of 100 on its 500-point scale, with lower numbers being better), noise levels increased to 48dB. It got even louder when I manually set it on high: 53dB. I unplugged the appliance and waited until the next day to bring a Coway Airmega 250 air purifier into the room, placing it on the floor at the same location (we’ll have a review of Coway’s new product soon).

The Airmega doesn’t have an app, but it does have onboard sensors that measure air quality and control its fan speed accordingly. When I measured the Airmega 250’s noise level while operating in its auto mode, the meter registered just 39.3dB—almost no change from the ambient level. I needed to put my hand over its vent to confirm that it was still running. When I reported my noise level readings to Aura, a company representative responded that they were “completely normal and meet all sound regulations/standards.”

The Aura Air is an effective air purifier with proven technology for destroying bacteria and viruses that might be present in your home’s air. On the downside, it can be exceedingly loud as it goes about that task. And while it boasts an attractive industrial design on its own, it’s just about impossible to blend into your home’s décor; plus, there’s the issue of the dangling power cord to deal with (it’s worth noting that most of the photos on Aura’s website show no cord at all).

Michael covers the smart-home, home-entertainment, and home-networking beats, working in the smart home he built in 2007.