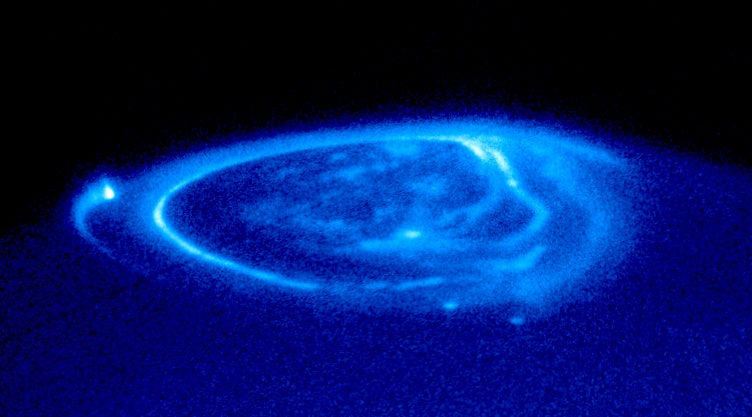 Intense auroral emissions from the universe’s tiniest stars may provide a new way to hunt for rocky planets that might otherwise go unseen. As a world moves through the magnetic field of its star, it can produce bursts of radio waves. The effect is akin to one astronomers have closely studied right here in the solar system: periodic radio emissions made by interactions between Jupiter and its moon Io. Using a powerful radio telescope, researchers have now identified multiple stars emitting the telltale activity. Each one, they say, could be host to a small world.

As a star rotates, its magnetic field sweeps through space, interacting with the charged particles blown from the stellar surface and carried away by stellar wind. If a planet orbits very close to the rotating star, it can further accelerate those particles, causing a bright flash in low-frequency radio waves. Such flashes are readily detectable in data from the Low Frequency Array (LOFAR), a European radio telescope network operating at the lowest frequencies that can be observed from Earth. LOFAR is in the midst of taking a wide-field, low-frequency radio survey, scanning the sky for sources. Parsing through the first data release from 2019, which encompassed about a fifth of the Northern Hemisphere sky, researchers flagged suspicious radio flashes from 19 red dwarf stars. Flashes from five of the stars were initially identified as closely matching predictions for how a planet’s auroral fireworks should look when witnessed from light-years away. Those results appear in a study published in Nature Astronomy, and a subsequent preprint paper has narrowed the candidates to four stars.

“We see no trends that we would expect if the emission was driven by stellar activity,” says the Nature Astronomy study’s lead author Joseph Callingham, a radio astronomer at Leiden University in the Netherlands. All four stars are relatively quiescent, meaning they are unlikely to constantly emit large flares that could mimic an auroral signal from a close-orbiting world.

For years, astronomers have been hunting for signs of planets interacting with the magnetic fields of their stars, focusing on the small subsets of suns thought to be most conducive for the search. Rather than targeting specific stars, however, Callingham and his colleagues relied on LOFAR’s blind, catch-all sky survey, allowing a more unbiased hunt.

“This is a really cool result,” says Gregg Hallinan, an astronomer at the California Institute of Technology, who was not part of the team. “No one’s been able to do this [before] in an unbiased way.”

Despite their diminutive size, in terms of stellar activity, many red dwarfs punch well above their featherweight, walloping any orbiting planets with very powerful flares. Typically, the faster a red dwarf spins, the more often it produces flares. But even slow-turning stars such as those from the LOFAR survey can occasionally burp them out.

In the subsequent study, the team sought to rule out run-of-the-mill flaring as the source for the flashes they found in LOFAR’s radio survey. To do so, the scientists used optical data from NASA’s Transiting Exoplanet Survey Satellite (TESS) to double-check the activity levels of their target stars. That research has been posted online at the preprint server arXiv.org and will be published in the Astrophysical Journal Letters. While one of the five previously identified quiet stars was found to be actively flaring in the TESS data, the other four remained quiet, further boosting the case for whirling planets being the cause of their conspicuous radio flashes.

“We can basically kill [flares as the cause] for the least active stars because they don’t flare at all,” says Benjamin Pope, an astronomer at the University of Queensland in Australia, who was a co-author of the Nature Astronomy study and first author of the second paper.

But the scientists cannot yet say that the signals are definitively linked to hidden worlds. Other, more mature planet-detecting techniques have come up empty for each of the four stars. “I can’t prove they’re planets, and I’ve tried,” Pope says.

Most of the efforts to hunt down the proposed planets began last year, when the researchers announced their discovery of the first candidate for star-planet interaction, GJ 1151, one of the four quiet stars. Two separate teams tried and failed to detect periodic wobbles in the motions of GJ 1151 that should arise from the companion suggested by the LOFAR data—an about one-Earth-mass world orbiting the star perhaps every few days, gently tugging it to and fro.

This is less than stellar news for researchers eager to find more ways to locate and study worlds beyond our solar system. Suvrath Mahadevan, an astronomer at Pennsylvania State University, who helped hunt for GJ 1151’s putative planet but was not involved in the two new studies, says that although planets probably can betray their presence by auroral flashes, an initial independent corroboration of the technique is essential. “The first time, you really want to see multiple lines of evidence converging,” he says. Data from more robust planet-hunting techniques should dovetail with the periodic radio flashes seen by LOFAR or other similar observatories, each echoing the other to conclusively reveal a world’s presence. “Then I feel like you open up the field,” Mahadevan says. “It becomes our next discovery tool.”

For now, Callingham and his colleagues are doubling down on their search, securing additional time on LOFAR for follow-up observations of GJ 1151 and continuing their deep dive into the observatory’s sky survey data. In coming years, upgrades to LOFAR, as well as the debut of an even more powerful facility called the Square Kilometer Array, will offer even more opportunities for discovery. Announcements of additional auroral planet candidates seem inevitable.

The driving impetus behind these efforts is more than mere academic curiosity. Red dwarfs (or M dwarfs, as astronomers confusingly prefer to call them) are not only the smallest stars in the cosmos but also the longest-lived and most numerous. Some estimates put as many as 75 percent of the stars in the universe as M dwarfs, and each can shine for hundreds of billions—even trillions—of years. Most importantly, statistical extrapolations from multiple surveys imply that almost every M dwarf hosts at least one planet. By raw numbers alone, it would seem M dwarf worlds represent the bulk of the universe’s planetary real estate. Whether or not any of those places could harbor life remains unknown—but studies such as Callingham’s can help settle the debate.

No one expects any planet embedded within an M dwarf’s magnetic field to be habitable. Such worlds would be so scorched by the nearby star that liquid water—the cornerstone of life as we know it—could not persist on their surface. Instead they can help researchers answer more fundamental questions about how M dwarfs influence their planetary broods. These stars’ penchant for outsize outbursts, for example, could sweep away the atmospheres of otherwise habitable planets—but a planet boasting a strong magnetic field might be sufficiently shielded to preserve its precious air. Astronomers are already able to discern between atmospheric and airless planets in a few select systems, but currently they have no reliable ways of measuring a small world’s magnetic field. According to work by Ph.D. student Robert Kavanagh and associate professor Aline Vidotto, both now at Leiden University, observations of auroral flashes might do just that, provided the strength of a flash is proportional to the intensity of a planet’s magnetism.

Studies of auroral M dwarf planets could also probe the density and speed of a host star’s stellar wind, according to Vidotto. (Neither Vidotto nor Kavanagh were part of the two new studies.) Such measurements could help astronomers determine how often M dwarfs experience coronal mass ejections, enormous belches of particles that, like flares, can be bad news for nearby planets. “I think [with this technique] we’ll learn a lot more about the star itself,” Vidotto says.

All of which, of course, feeds into the unsolved mystery of M dwarf habitability and the greater conundrum of where in the cosmos life-bearing planets are most likely to be found.

“Planets don’t survive in isolation. They survive around their star,” Mahadevan says. “I think the linchpin to [understanding M dwarf habitability] is really understanding the magnetic activity and the magnetosphere of these stars.”

Nola Taylor Tillman is a science writer with a focus on space and astronomy.