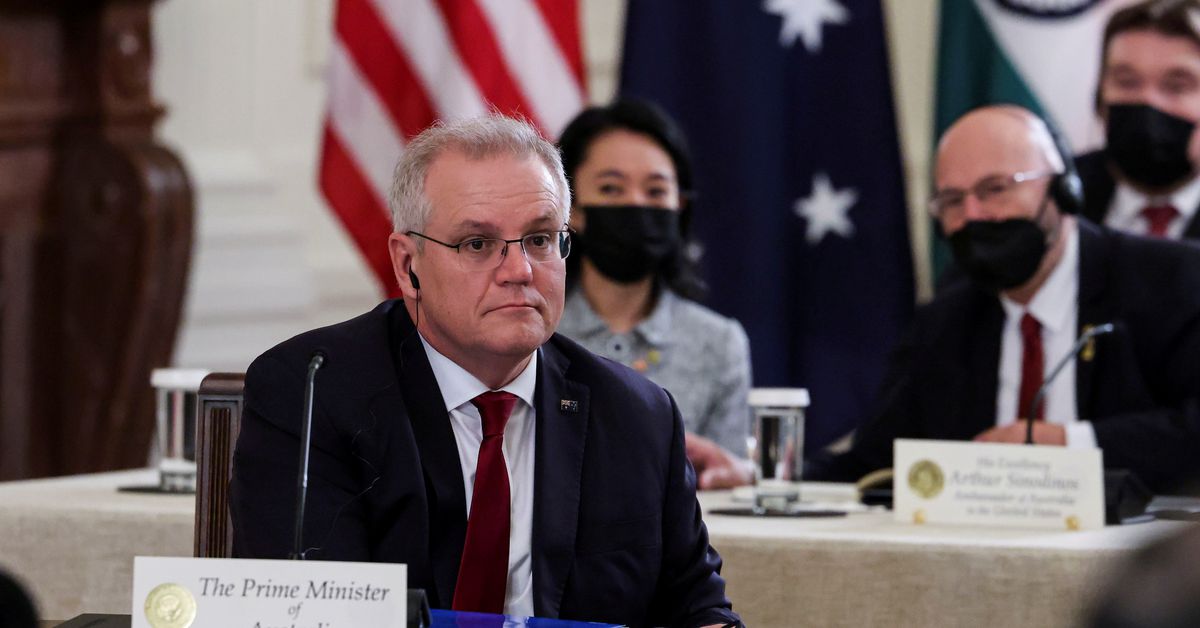 Australia’s Prime Minister Scott Morrison is seated with members of his delegation as he participates in a ‘Quad nations’ meeting at the Leaders’ Summit of the Quadrilateral Framework hosted by U.S. President Joe Biden in the East Room at the White House in Washington, U.S., September 24, 2021. REUTERS/Evelyn Hockstein

CANBERRA, Oct 26 (Reuters) – Australia, long under fire as one of world’s top producers of coal and gas, said it will target net zero carbon emissions by 2050, but added it will not legislate the goal and instead rely on consumers and companies to drive emission reductions.

The adoption of the target will ease international criticism after Australia earlier refused to join countries in pledging to meet the target ahead of the United Nations COP26 climate conference in Glasgow from Oct. 31 to Nov. 12. read more

Prime Minister Scott Morrison said Australia, one of the world’s largest emitters of greenhouse gases on a per capita basis, will achieve the target largely through technology development, with the government investing A$20 billion ($15 billion).

The investment will reduce the costs of technologies such as clean hydrogen and increase their use, he said.

Morrison has been in a political bind over climate change. He needs the support of rural votes who oppose the reducing emissions as he heads into an election that must take place by May, but much of the wider Australian population wants to see more action.

A widely watched poll on Monday showed Morrison is on course to lose to the centre-left Labor party. read more

On Tuesday, Morrison, sought to downplay any threat to domestic industries and jobs as a result of reducing emissions.

Morrison also said Australia will not strengthen its 2030 target of reducing emissions by 26-28% from 2005 levels but added the country looks like it will reduce emissions by 30-35%.

Critics said Morrison’s plan was too weak and does not prepare the Australian economy for a rapidly evolving world.

“Unless the government sets the wheels in motion to cut our emissions in half by 2030, it is making climate change worse and turning its back on the opportunities,” said Kelly O’Shanassy, chief executive officer of the Australian Conservation Foundation.

“Australia cannot keep relying on coal and gas exports because these industries are on the way out and if those workers are not helped with the transition, they will be left high and dry.”

Morrison struggled to gain backing for the net zero target from his coalition government’s junior partner, the National Party, which has a regional power base reliant on agriculture and mining.

However, the party said on Sunday it would support a net zero target. According to the Australian Financial Review, the deal includes an agreement for increased spending on regional infrastructure and tax benefits for income derived from carbon farming.