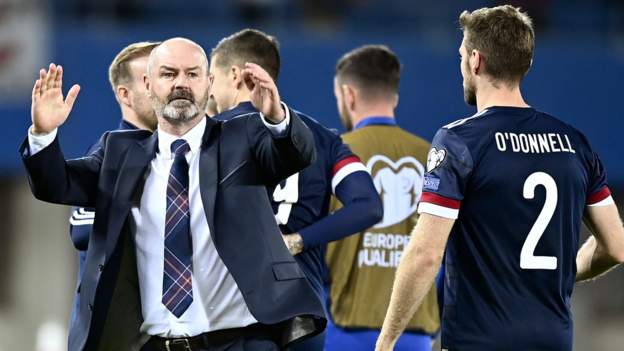 Steve Clarke made an impassioned defence of his Scotland players after their crucial World Cup qualification win in Austria, saying “some people don’t believe in this group but I do”.

Lyndon Dykes’ penalty in Vienna earned a 1-0 win that puts Scotland into the play-off spot with four games left.

The squad were criticised after defeat in Denmark and a 1-0 win over Moldova.

“Some people want to label us ‘long ball’, but we got it down and passed it,” Clarke told Sky Sports.

“We deserve a little bit more respect. We are a good team with a great squad of players. I trust them everywhere we go. We want to play and be on the front foot and we want the credit we deserve.”

Scotland were overwhelmed in the early stages in Copenhagen last Wednesday by a Denmark side who have now won all six of their games in the section.

Ultimately, they slipped to a 2-0 defeat before eking out a win over bottom side Moldova at Hampden -and Clarke says the victory in Vienna means the run of three games in six days can be considered a success.

Israel visit Hampden next month, with Scotland knowing a win would leave them four points clear with three games left. Trips to the Faroes and Moldova follow, before the group concludes with the Danes visiting Glasgow.

“We said it was a pivotal week and we have come out with six points. I think that’s a decent return,” Clarke said.

“We went to Denmark – Covid disrupted, injury disrupted – lost two early goals and dug in to find a way to get back into that game. We got criticised and I couldn’t say too much after the game but Israel went there tonight and lost by five.

“It means the next game is another cup final. We have to keep picking up points. We’ve come along way, I think we can get better, and I think we will get better. Tonight is another step on that route.”