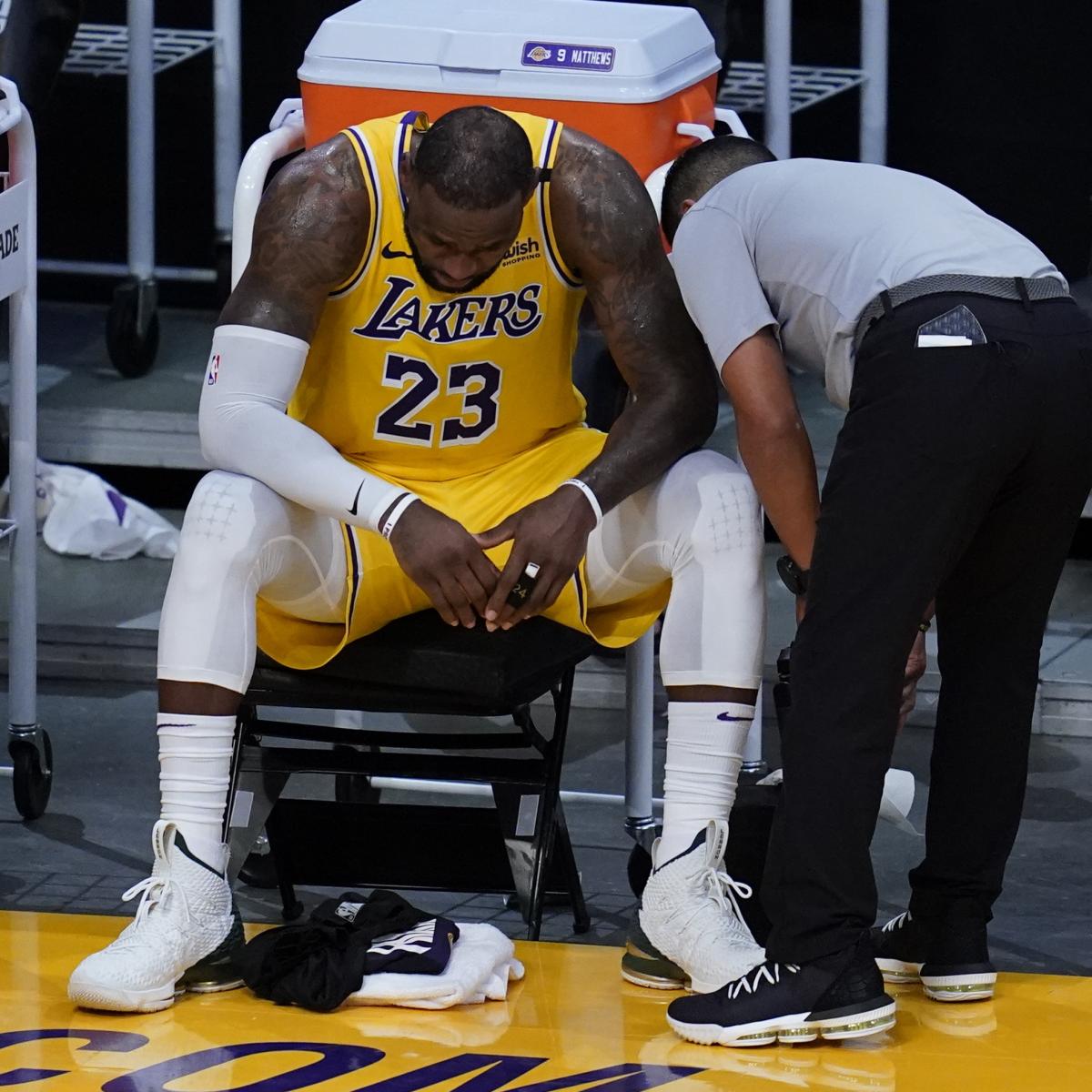 Eight months ago, LeBron James and Anthony Davis were celebrating their 2020 Finals win in the NBA’s Orlando bubble.

On Thursday, the upstart Phoenix Suns handed them a third straight loss and a ticket to the offseason. With their 113-100 win in Game 6, the Suns will now advance to face the Denver Nuggets in the second round.

Naturally, the conversation around this Lakers team will now focus on the future. Is there anything the front office can do to reinforce the roster? Is AD ready to be the No. 1 on one of the league’s most storied franchises?

If LeBron has finally ceded some ground in his battle against Father Time, the Lakers will have to find answers to those and other questions.

The franchise player will turn 37 in December. He missed a significant chunk of time with a sprained ankle this season. And in the playoffs, he appeared a bit less explosive than he has in postseasons past.

Are we really witnessing the beginning of LeBron’s decline? And if so, what might it mean for the Lakers?

“Decline” will look different for LeBron than it has for just about any other player in league history. He’s already in mostly uncharted territory. John Stockton, Karl Malone and Kareem Abdul-Jabbar are the only players whose late-30s productivity might rival LeBron’s, but Stockton was the only one tasked with engineering his team’s offense.

That LeBron has remained as dominant as he has to this point is remarkable. But 37 is 37, and that’s how old LeBron will be a couple of months into the 2021-22 season. At some point, he has to decline. And the last couple of months have presented some signs.

Anyone can sprain an ankle, but it somehow felt more notable for LeBron, who has seemed invincible for nearly two decades. Looking a bit less explosive, both laterally and vertically, upon his return was hard to get a handle on too.

An offseason of treatment, refinement and adjustment leading to another age-defying season certainly wouldn’t be surprising, but even “age-defying” at this point could also coincide with a decline.

I can’t, in any way, bring myself to wax profoundly about LeBron James after the first opening-round playoff loss of his career. To do so feels forced.

Sure, if the argument rests on his entering an age-37 season and Father Time remaining undefeated, then fine. That’s overwhelmingly fair. It’s also a stance that feels rooted in more historical evidence than LeBron-specific evidence.

He should be held to a standard entirely his own. Typical regression arcs cannot be the assumption unless he actually travels down them, and to this point, he has not. Most of his performances against the Suns were uninspiring. He wasn’t attacking the basket as often or easily and never cobbled together a trademark takeover game.

But these “struggles” come on the heels of a severe high right ankle sprain that left him on the sideline for a career-long stretch. He has since appeared in nine games (play-in tourney included). That’s not a lot of ramp-up time from what’s a fickle injury to begin with and, presumably, far harder to recover from when you are, in fact, 36.

Go ahead and put up the caution signal on LeBron’s trajectory. But let’s skirt full-blown panic until he’s not coming off the shortest offseason in the history of professional sports on top of laboring through an injury from which he clearly hasn’t recovered. He has nothing if not earned that much benefit of the doubt.

Nobody spends more time (and money) on their body than LeBron James, so I’m reluctant to say definitively that his physical decline is coming next year. But one thing this season, and especially the playoffs, has made obvious is that the “LeBron, AD and piece together the rest” roster-building strategy isn’t going to be viable going forward for the Lakers.

Are the days of James single-handedly being able to carry flawed teams through several playoff rounds over?

Could Rob Pelinka do a better job of building rosters around him and Davis that will be able to withstand what is no longer assumed to be a fully healthy James?

LeBron James was finally defeated in the first round of the playoffs. It took until his 18th season, but he and the Lakers are done for the year.

It was a difficult season, one riddled with injuries. James has been on the decline now for the past three seasons. In his first year with the Lakers (2018-19), he suffered one of the worst injuries of his career (groin), and the team didn’t even make the playoffs. Last year was magical for the team, winning its 17th title behind a brilliant performance from James, but in the hurried return to play for 2020-21, he was lost again for a lengthy period with a high ankle sprain.

James is not the same player he was a decade ago in Miami or Cleveland, but the good news for the Lakers is that James, even on the decline, is still better than almost any player on the planet. Before Anthony Davis went down, the Lakers seemed to have control of the series against the Suns. Without Davis, and with James seemingly still bothered by the aftereffects of the ankle injury, he didn’t have enough to carry L.A.

Finally, James should be well-prepared for his fourth season with the Lakers with some real time off. He needs a healthy Davis and a solid core of role players so that James isn’t forced into a similar position. It’s a simple formula. If the Lakers, specifically James and Davis, are healthy next year, they’ll be right back in contention—even if James may have lost a micro-step or two.

This is not the first time LeBron James has had to deal with this question. His first season as a Laker was marred by a groin injury. His response the following season was to finish second in MVP voting and win a championship while averaging 25.3 points, 10.2 assists and 7.8 rebounds per game.

James answered the questions then, but he will face them again after losing in the first round for the first time in his career. It was not a groin injury this time but a high ankle sprain that kept him out even longer. Once he did return, he never looked fully healthy. Prior to the injury, he was averaging 25.4 points while shooting 51.3 percent from the field and 36.8 percent from three and was in the hunt for another MVP award.

James’ return was rocky, coming back for two games before having to sit out the next six and then playing the final two before the play-in tournament. He is no longer indestructible, but it’s not the end of the LeBron era.

The Lakers will need to retool and add more shooting around James and Anthony Davis, who also dealt with injuries all season. The season starting so soon after the Finals and the nature of a compressed schedule did not help James buy enough time to recover.