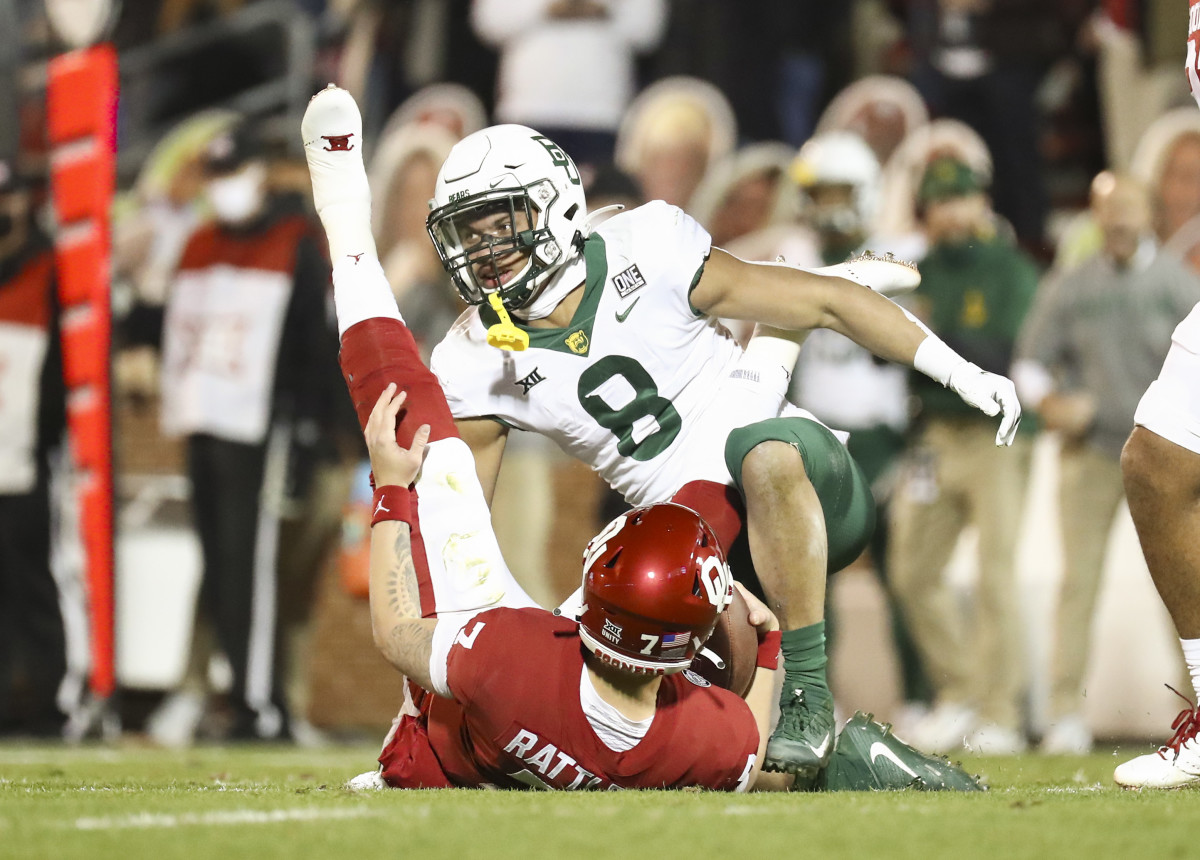 The term “hybrid” is described as some made by combining two different elements. In football, it’s basically a do-it-all prospect on one side of the football.

“I think Pitre is a heck of a player,” Texas coach Steve Sarkisian said Thursday. “This guys is very versatile. He can play the pass, run, he can blitz. He’s a slippery blitzer.”

Maybe Texas (4-3, 2-2 Big 12) has a problem on its hands taking care of the 6-foot defensive back that hits like a linebacker and covers like a corner. The 197-pounder is listed as the “STAR” for Aranda’s defense for good reason.

Star defenders usually are bigger nickels that can work in both sub-packages or a typical base formation. They tend to line up just off the edge of linebackers and do just a bit of everything.

Run, blitz, coverage, you name it. Pitre has continued to progress in all aspects of those roles this season, finding success as a tweener-type entering his senior season.

The transition to more of a coverage role was one approach by Aranda following his 2019 national championship season at LSU. Pitre played linebacker all four years in high school and was a linebacker under former Baylor coach Matt Rhule’s defensive front.

Aranda asked him one day if he would be ok working with more of the defensive back drills. It would allow Pitre’s athletic traits to roam free in space, giving him a chance to boost his numbers and rep count.

Pitre said he was on board and the rest was history. This season, he’s accumulated 42 total tackles, two interceptions, a pass breakup, a forced fumble, a sack and fumble recovery.

“This guy can find edges, dip and get low and wreak havoc there,” Sarkisian said. “He gets his hands on the ball in the secondary. I have a lot of respect for him as a player and what he brings.”

The Bears defense has benefitted from having a player with such skills playing in space. Baylor currently ranks second in the Big 12 in points allowed (18.7), second in pass defense (198.9), and third in total defense (333.3).

Sarkisian was one of the first coaches to see skills that would allow players to be positionless. Back at Washington, he recruited Thompson as a linebacker, yet watched as the 220-pounder moved like a defensive back in coverage.

Soon, Thompson would take reps across the field at safety, linebacker and sometimes even cornerback. Sarkisian, however, doesn’t see similarities between the now-Carolina Panthers linebacker and Pitre, mainly due to the size.

Instead, he sees another former Huskies star mirroring the same skills.

“Pitre reminds me of Budda Baker,” Sarkisian said. “Budda was not quite as big, but played big and was impactful in a lot of different ways. Pitre provides that for Baylor.”

The Horns need to find some consistency in Waco. Yes, offensively, Texas has put up points all season. Then again, in the past two games, they’ve scored 17 combined in the second half of games, while combining for 55 in the first.

Two implosions against the schools from Oklahoma now have Texas going from a chance to win the Big 12 in Sark’s first season, to being in danger of finishing the year just over .500.

A balanced attack with quarterback Casey Thompson and running back Bijan Robinson should be a top priority when the whistle blows at McLane Stadium for the early kickoff.

Oh, and stopping Pitre. Then again, maybe just slowing him down will be enough of an ask.

Want the latest in breaking news and insider information on the Longhorns? Click Here

Want to join in on the discussion? Click here to become a member of the Longhorns Country message board community today!