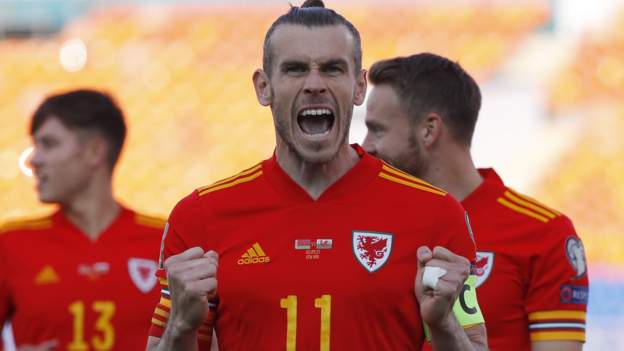 Gareth Bale completed a match-winning hat-trick deep in injury time to spare Wales from embarrassment against Belarus in Russia and keep alive their hopes of qualifying for the 2022 World Cup.

Wales made the ideal start as the first of two Bale penalties gave them an early lead, but they unravelled in two calamitous first-half minutes as goals from Vitali Lisakovich and Pavel Sedko put Belarus in front.

Lisakovich scored from the spot after Chris Gunter was penalised for a raised foot, before an unmarked Sedko punished shambolic defending from Wales, who were fortunate not to be further behind at half-time.

Bale scored his second penalty to bring Wales level midway through the second half and, in the third of four minutes of injury time, the captain came to his country’s rescue with a low shot that squirmed under Belarus goalkeeper Sergei Chernik and into the net.

After losing their opening match of the campaign to group leaders Belgium, Wales could ill afford to draw this game, never mind lose it.

And having stared at an ignominious defeat in Kazan which would have effectively ended their aspirations of qualifying automatically for the 2022 World Cup in Qatar, this fortuitous victory keeps the dream intact, no matter how improbable it may be.

Only the group winners qualify automatically and Group E leaders Belgium, ranked number one in the world and unbeaten in their four matches to date, remain overwhelming favourites ahead of the second-placed Czech Republic and Wales, who are third with a game in hand.

Robert Page’s side have another five games to catch their rivals – starting against Estonia in Cardiff on Wednesday – but, even at this early stage, the play-offs look like their likeliest route to a first World Cup appearance since 1958.

Finishing second in their group would secure a play-off spot, but Wales at least have the peace of mind that winning their most recent Nations League group has all but ensured their passage to the play-offs.

That might have been what most would have expected of Wales when they were drawn in such a challenging group but, after this escape act against a Belarusian side 89th in the world rankings, they still have an outside chance of overhauling Belgium.

This was very nearly a nightmare come true for Wales, whose preparations for this game had been disrupted like never before.

On top of the 10 players absent because of injury, suspension and Covid-19, they were without a further three as a result of visa issues.

That was because the game was moved to Kazan in Russia as teams from the United Kingdom and the European Union cannot enter Belarus by air because of sanctions against the country’s government.

No wonder, therefore, that Page had described this fixture as a “nightmare logistically” – but Wales were still expected to beat a Belarus team 70 places below them in the Fifa rankings.

They looked well placed to do so when they were awarded a penalty inside five minutes. Bale latched on to a lofted ball into the Belarus penalty area by Ben Davies and, after taking a touch, the Wales captain was clattered to the ground by Chernik.

Bale sent the Belarus skipper the wrong way with his penalty, firing into the bottom-right corner to end a run of 16 matches without an international goal stretching back to 2019.

Wales took control from that point and had chances to extend their lead, with Joe Allen having a shot saved by Chernik and Daniel James pushing another narrowly wide.

However, after half an hour the contest was turned on its head as Wales imploded.

Gunter was the first to err with a high boot on Nikolai Zolotov, which Lisakovich punished with a thunderous low penalty, and then centre-backs James Lawrence and Chris Mepham were both horribly out of position as Sedko scored Belarus’ second.

The home side, albeit on neutral ground, should have been further ahead by half-time but Aleksandr Sachivko and Danila Klimovich both squandered fine opportunities.

Those were to prove costly misses as Wales were awarded a second penalty when Davies was pushed in the back as he attempted a header on goal. Bale, who had missed a spot-kick during Euro 2020 this summer, scored his second of the game as he sent Chernik the wrong way once again.

Wales knew a draw was of no real use against such lowly opposition but their desperate late attempts to score a winner looked destined to amount to nothing.

That was until the ball fell to Bale inside the box and, with just a minute of added time left, his low left-footed strike snuck under Chernick and rolled over the line to complete his hat-trick and Wales’ late heist.