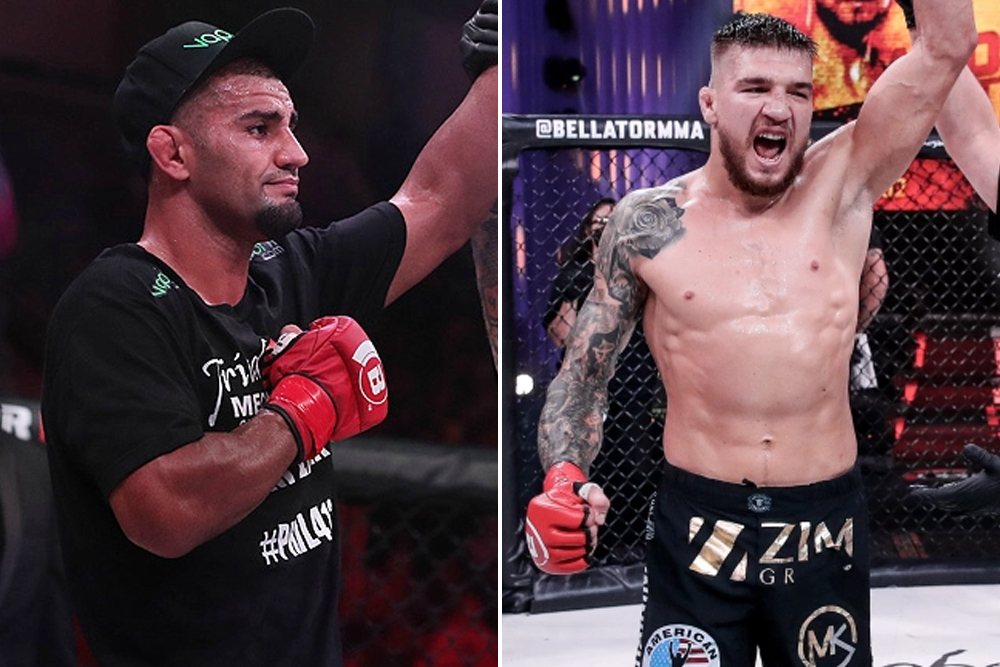 The Bellator 260 main event features a fantastic matchup for the welterweight title between two fighters who are familiar with pressure.

Despite coming from a combat sambo background, Yaroslov Amosov displays a technical, well-versed striking style on the feet. The 27-year-old can fight from either stance, incorporating healthy lateral movement in the process.

Amosov also demonstrates some solid distance management and defense when he means to, typically doing a good job of rolling out underneath his crosses. The Ukrainian talent can fight and counter competently off the back foot, but seems to do his best work when pressuring.

But if Amosov means to pressure the champion and attempt to get his jab going, then he will need to be mindful of the potential jabs and counters coming back his way.

The current ruling welterweight warlord under the Bellator banner, Lima has steadily developed a heavy jab of his own that he’s not afraid to step into.

Steadily stalking his prey behind subtle feints and fakes, the Brazilian is seldom out of position while keeping his patented right hand at the ready. Although this weapon has served Lima well – he is accurate both coming forward and off the counter – his reliance on his right has also cost him hand injuries.

Subsequently, we saw Lima improve his left hand in the latter part of his career. He now throws the previously mentioned jab to go along with his already potent left hook and leg kicks. Even when circling away, the champion will now smartly attach check-hooks to his lead-foot pivots, which comes in handy when his opposition chooses to get aggressive with him.

But if Lima fails to break his bad habit of fighting on the outskirts of the cage, then he could end up inviting a lot more offense his way.

Considering the traditional path of least resistance that most tend to take with the champion, I will be curious to see how early and often Amosov elects to go to his wrestling.

A fighter who clearly has worked hard on his wrestling ability, Amosov carries a wide variety of takedown options that range from open space to against the fence. Whether Amosov’s changing levels for a reactionary double-leg or working from over-unders in the clinch, the challenger flows fairly seamlessly when having to chain attacks together.

However, Lima has made measurable efforts to his takedown defense in more recent years, showing a bit better hip and grip awareness when he does get stuck up against the cage. But if Lima does get taken down by a talent like Amosov, then he’ll need to be extra urgent in order to not let rounds or positions get away from him.

A four-time combat sambo world champ, Amosov shows all the submission and transitional savvy you’d expect from a fighter with those accolades.

From his smooth positional flows from topside to his ability to scramble with the best wrestlers in his division, Amosov appears to be a menace once he gets going. But as good as Amosov’s defensive wherewithal may seem, he’ll still need to be careful about getting stuck in Lima’s guard.

Predicating a lot of his grappling and clinch game off of an overhook, the sitting champ is quick to both secure and work from butterfly guard variations whenever possible. And if Lima is able to sweep or end up on top of Amosov, then the Ukrainian challenger will need to mind his propensity to turtle and give his back since he’ll be facing a Brazilian jiu-jitsu black belt who can make him pay for mistakes.

The oddsmakers and public are slightly siding with the sitting champion, listing Lima -120 and Amosov +100 as of this writing.

Considering money continues to come in on the challenger, I feel a bit less crazy for my prediction here.

I think Lima is the deserved favorite in this spot, but Amosov embodies a lot of the features that one would need to beat the hard-hitting Brazilian. Although Amosov does not have the five-round experience to make strong claims about his cardio, he does seem to be incredibly well-conditioned to keep up his offensive output. (I don’t condemn him for getting tired in that crazy fight with Logan Storley at Bellator 252.)

Nevertheless, output equals opportunities. Amosov will likely have to show off a bit of his chin regardless of how this fight goes. But if Lima fails to either debilitate Amosov’s legs early or hurt him with a check hook, then I fear the fight will start to get away from him – especially if Amosov can score takedowns within the first two rounds.

I said in my Bellator dark horses piece that I suspect Amosov could be stylistic Kryptonite for Lima. I’m officially siding with him here to take over down the stretch for a decision win.