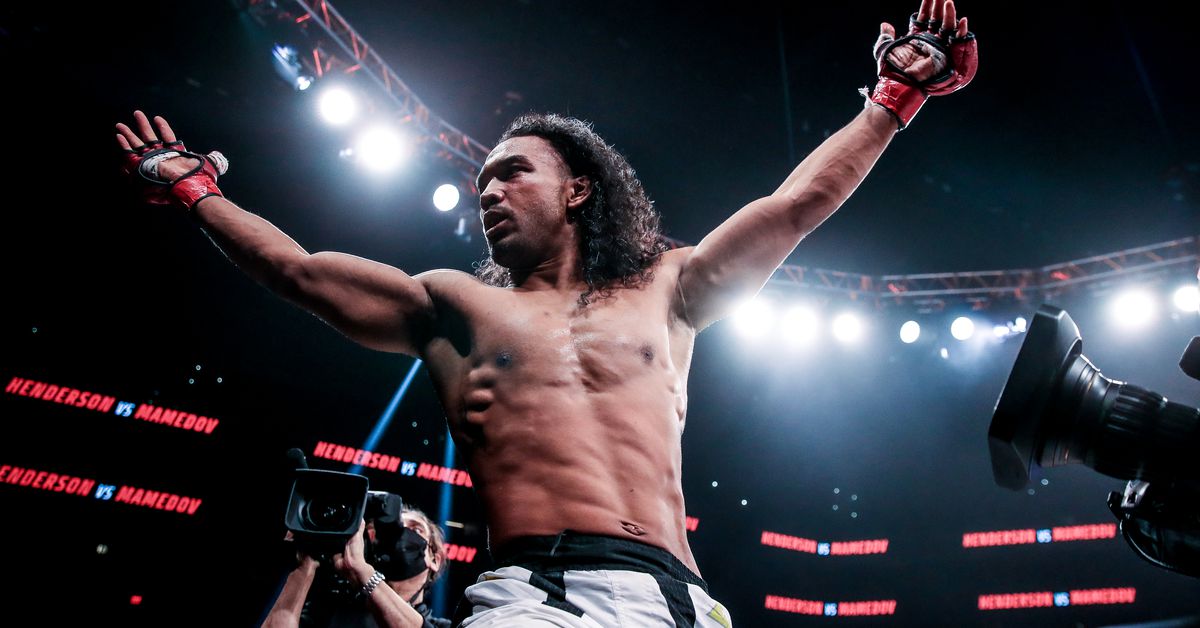 The former UFC lightweight champion won a thorough if workmanlike unanimous decision over hometown favorite Peter Queally on Friday in the main event of Bellator 285, which took place at the 3Arena Arena in Dublin, Ireland. Henderson (30-11) led the dance from pillar to post, using a steady diet of takedowns, forward pressure, and clinch control along the fence to earn a trio of 49-45 scores over Queally (13-7-1), with his lone point deduction being the result of a second-round groin kick.

While he was in control throughout, the 38-year-old American had his best moment in Round 4 when he dropped Queally with a monster standing elbow. Henderson swarmed with strikes to finish, however Queally survived and ultimately made it to the final horn.

“Man, Peter is tough as heck,” Henderson said afterward. “I know I landed a couple of super clean good elbows, and he just looked at me and came forward. I was like, ‘Holy [crap]!’ That dang ‘Zombie’ song — he’s a zombie.”

The win pushed Henderson’s Bellator record to 7-6 since signing with the promotion in 2016. Afterward, Henderson called to face the winner of Bellator 288’s lightweight title bout on Nov. 18 between reigning champion Patricky Pitbull and Usman Nurmagomedov.

After a sluggish opening two rounds, Romero dialed up his aggression in the final frame, taking Manhoef down and pulverizing him with a volley of hard punches and elbows from top position. Three particularly nasty elbows were the final death knell on Manhoef’s career, leaving the Dutchman unconscious on the canvas at the 3:34 mark of the third round.

Manhoef, 46, walks away from MMA after a near three-decade run highlighted by knockouts of Mark Hunt, Kazushi Sakuraba, Kazuo Misaki, and more, having made his debut in 1995.

“I didn’t want to fight a nobody,” Manhoef said post-fight, taking his gloves off and resting them down in the center of the cage. “I wanted to fight names, and I did the best that I could. For 28 years, I’m doing this, this is what I love, and I appreciate all the support that you gave me. But today, I think I have to hang up the gloves after 28 years of fighting. Thanks for the support, you make my life great, you let me feel alive.”

Elsewhere on the main card, Leah McCourt (7-2) won a contentious unanimous decision over Dayana Silva (10-8) to pull within striking distance of a title shot against Bellator women’s featherweight champion Cris Cyborg, pending the resolution of Cyborg’s contract status with the promotion.

It was a close if uneventful contest, and though Silva got the better of many of the exchanges, it was McCourt who the ultimately drew the judges’ backing, earning scorecards of 29-28, 30-27, 30-27 in her favor to rebound from her February loss to Sinead Kavanagh, which was her first setback in the Bellator cage.

The fight was a tale of two halves, as Burnell controlled the action with stifling ground work for the majority of first seven minutes, only for Carvalho to then pull ahead with reversals and level changes of his own, including a dominant Round 3 that saw the 27-year-old score a big takedown into side control followed by several minutes of ground-and-pound.

Moore was saved by the bell at the end of the first round after being dropped by a standing elbow then pummeled along the fence, however he reversed his fortunes in Round 2, taking Albrektsson down with a double-leg, working to Albrektsson’s back, then wrapping up a gnarly jaw crank to coax a fight-ending tapout at the 2:36 mark of the round.

“I’ve been out for three years so I wanted a high-level guy. Karl Albrektsson is ranked No. 7 in the Bellator rankings, so that puts me right up there,” Moore said. “Yoel Romero, I may see you soon, boy.”

Complete Bellator Dublin results can be seen below.