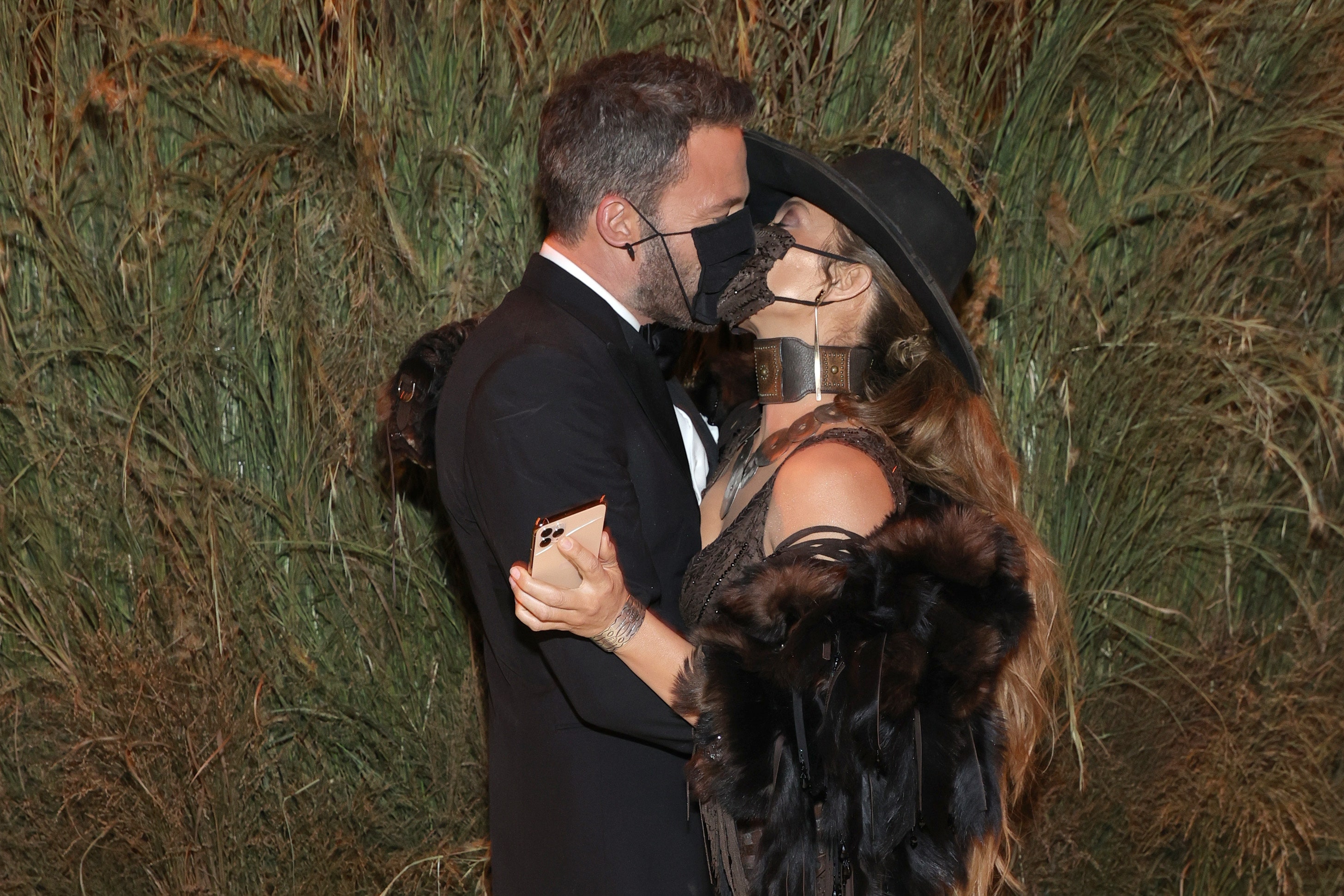 Yes, it’s 2021, and Jennifer Lopez and Ben Affleck have reunited. No, you’re not dreaming. This is real. This is happening.

Here’s what we know: Lopez and Affleck were engaged in the early aughts, split up, and went on to date, marry, and divorce other people. Now they’re both single and in each other’s lives again—though the exact capacity is unclear. Until we find out more, let’s look back on how “Bennifer” formed in the first place:

December 2001: Sparks fly between Lopez and Affleck on the set of their movie Gigli.

November 2002: Affleck pops the question to Lopez with a custom-made pink diamond solitaire engagement ring. In an interview with Diane Sawyer, Lopez gushes that Affleck is “brilliantly smart, loving, charming, and affectionate.” She adds, “I just admire him in every way.”

September 2003: Just days before they’re set to tie the knot in Santa Barbara, California, they release a statement saying they’re postponing the wedding.

“Due to the excessive media attention surrounding our wedding, we have decided to postpone the date,” the statement reads. “When we found ourselves seriously contemplating hiring three separate ‘decoy brides’ at three different locations, we realized that something was awry. We began to feel that the spirit of what should have been the happiest day of our lives could be compromised. We felt what should have been a joyful and sacred day could be spoiled for us, our families, and our friends.”

January 2004: Less than three months later, the wedding is off. The couple confirm their split with separate statements.

Lopez’s rep releases the following statement, per People: “Jennifer Lopez has ended her engagement to Ben Affleck. At this difficult time, we ask that you respect her privacy.”

Meanwhile, Affleck’s rep adds, “I am not going to confirm anything about his personal life. We don’t want to get dragged into quicksand. Everybody wants a war. It’s not happening from our side.”

April 2021: Affleck and Lopez stay friendly (at least in recent years). He praises her work ethic to InStyle: “She has great talent, but she has also worked very hard for her success, and I’m so happy for her that she seems, at long last, to be getting the credit she deserves.”

Affleck visits Lopez at her Los Angeles home on April 30, a source tells People. “They are friends. They have always been friends and they have seen each other through the years,” another source says.

But TMZ alleges their reunion began before Lopez and ex-fiancé Alex Rodriguez’s recent breakup. Insiders tell the outlet Lopez and Affleck were emailing each other regularly, starting in early February, when she was filming Shotgun Wedding in the Dominican Republic. Allegedly, Affleck’s emails were “loving” and showed “longing” for Lopez.

May 10, 2021: Lopez and Affleck reportedly take a trip together to Montana and are spotted at a resort near Big Sky.

“She had a great time with Ben,” a source tells People about the Montana trip. “She is happy with him and enjoys spending time with him.” A separate insider reveals to People, “[Jennifer] spent several days with Ben out of town. They have a strong connection. It’s all been quick and intense, but Jennifer is happy.”

Meanwhile, a source tells E! Online, “She wants to give it a shot with Ben. They never really had closure and she has always wondered what could have been. The timing was never right and they were in different places until now.”

A source told People for a May 14 article, “[Jennifer] is in touch with Ben every day. They are making plans to see each other. Jennifer is still very excited about how things are going with Ben.”

May 21, 2021: A source tells Us Weekly that they have reunited in person in Los Angeles since their trip to Montana.

May 25, 2021: A source tells Entertainment Tonight the two are now in Miami together: “[Jennifer] has been telling her friends nice things about Ben, and they’re having a lot of fun together…. They feel very comfortable with each other, but are also completely smitten, and it still feels like having a new crush after all these years.” Aww!

June 8, 2021: Lopez is allegedly moving back to L.A. for a “fresh start” with Affleck, E! News reports. A source says that she’s “packing up her Miami rental” and leaving the city where she lived with ex-fiancé Alex Rodriguez. “She will be between L.A. and the Hamptons this summer, but L.A. will be her base,” the insider says. Her twins, Emme and Max, will join her, and Lopez is reportedly already looking at schools for them to attend in the fall.

June 9, 2021: Speaking of L.A., the pair have reportedly reunited in California following a brief period apart. Affleck has been in Las Vegas filming a movie. On June 9, Affleck was spotted with Jennifer Lopez’s mom, Guadalupe Rodríguez, at a casino. According to a source speaking with People, “Lupe was there to film a fun cameo.”

“In the past, Jennifer’s mom and Ben were very close,” the source says. “Guadalupe loved Ben. She was sad when they couldn’t work things out years ago. She is thrilled that they are back together now.”

“Jennifer is very close with her mom. It’s very important to her that the person she is with gets along with her mom,” they add. “Jennifer loves that Ben and Guadalupe hung out in Las Vegas. They both love gambling and had fun together at the Wynn hotel.”

June 14, 2021: The pair are spotted making out at dinner in a pretty public display of affection—and there’s been no holding back since.

June 25, 2021: The pair share a private date night at Avra Beverly Hills Estiatorio, per People. “They enjoyed Mediterranean food in one of the private dining rooms. Jen looked amazing. They were both in a great mood,” a source tells People. “Ben always looks very happy when he is with Jen.”

We believe it! In one photo from the evening, Lopez can be seen smiling from ear to ear. The source adds, “She spends as much time with Ben as possible.”

July 4, 2021: The pair spend the holiday weekend in the Hamptons wearing matching outfits.

July 6, 2021: In a new interview with with Apple Music’s Zane Lowe, Lopez says she’s having the “best time of my life.”

July 13, 2021: Fans notice that Lopez “liked” a picture of Affleck posted by a fan account. In the photo Affleck relaxes on the set of The Town, looking swole in a Believe in Boston T-shirt. Thirst-ay.

July 15, 2021: The couple are photographed outside a $65 million mansion they were reportedly scoping out while house-hunting in Holmby Hills (a fancy neighborhood of Los Angeles). In the photos, which you can see here, Affleck snags a kiss either before or after their tour of the home.

However, TMZ reports that Affleck was simply escorting Lopez on her own house tour and that the pair “aren’t ready to shack up together…at least not yet.”

July 24, 2021: It finally happened, y’all! On the pop star’s 52nd birthday, Lopez posted a picture of her and Ben Affleck making out on her Instagram feed. It was the fourth slide of the photo carousel, but that still counts as Instagram-official! It also may be the hottest photo ever taken.

August 2021: This month has been all about the kids. On August 15, Lopez is reportedly spotted with her 13-year-old daughter, Emme, picking up a few gifts for Ben Affleck’s daughters, 15-year-old Violet and 12-year-old Seraphina Affleck. “When she stopped by the Made by Mary jewelry station, she and Emme picked out several ‘birth flower necklaces,’ including two for Ben’s daughters,” one guest at producer Jennifer Klein’s exclusive Day of Indulgence event tells People, adding that Lopez planned to bring the gifts to Affleck’s 49th-birthday gathering later that evening.

One week later Lopez and Affleck take a family trip to a performance of Hamilton at the Hollywood Pantages Theatre, according to TMZ. On August 21, they keep the fun going at Magic Castle in Los Angeles.

“Since Jennifer and Ben are in it for the long run, it’s just a natural step that they all spend time together with the kids,” a source tells People. “They are not trying to rush anything, but they want all the kids to get to know each other. They are making the last few days of summer as fun as they can. Soon it’s back to school and work.”

September 2021: Jennifer Lopez and Ben Affleck make their red-carpet debut as a couple. On September 10, the pair get very cozy—and even share a kiss—at the Venice Film Festival premiere of Affleck’s new film, The Last Duel.

As the pair are leaving the festival on September 11, Affleck plays knight in shining armor when an aggressive stranger reportedly looking for a selfie gets way too close to the couple. Before security steps in, People reports that Affleck blocks the maskless man and pushes him away. See the photos here.

Loffleck returned to the red carpet as a couple once again for the 2021 Met gala. The evening’s theme was “In America,” and what is more American than the First Couple of Hollywood making headlines? Standing outside of the Metropolitan Museum, Lopez and Affleck went for another eye-catching first—they kissed, passionately, through their masks. I mean, is there a better sign of the times?