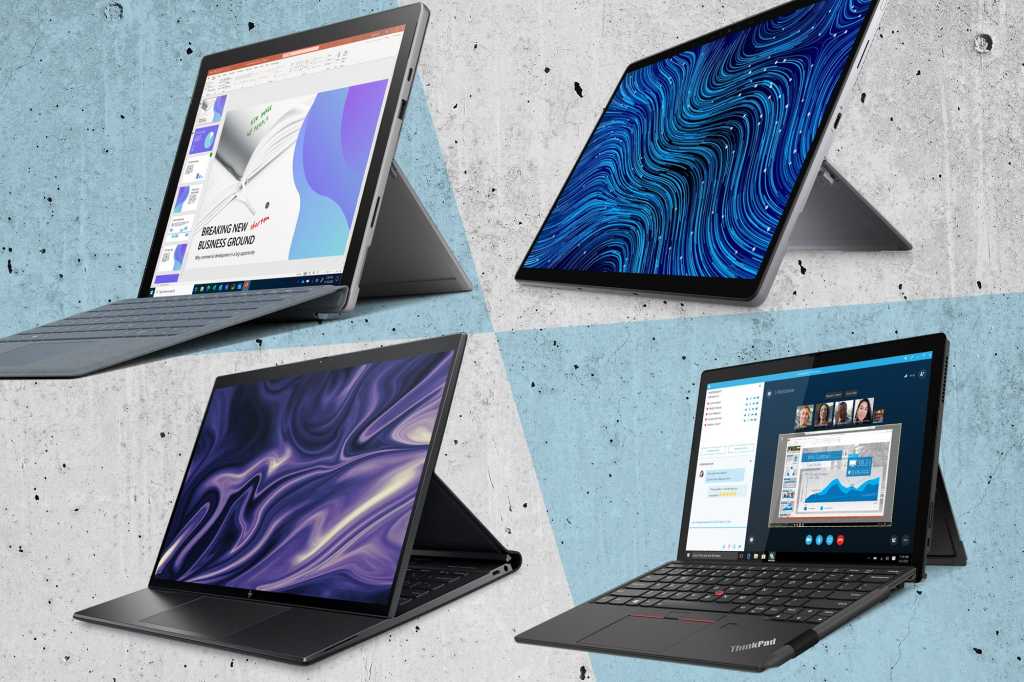 The best Windows tablets squeeze as much performance, battery life, and features as they can inside their ultraportable form factors. Also sometimes referred to as 2-in-1s, thanks to their ability to function as a laptop with the aid of rotating or removable keyboards, these compact PCs can replace a traditional laptop or an iPad for on-the-go work and play. Of the six major tablets of the 2021 generation, two are particularly notable and stand out above the others.

Our individual reviews delve deeply into each tablet’s strengths and weaknesses. In this article, however, we’ll provide a top-down comparison of the five we’ve tested, focusing on the areas that should be of particular interest to a Windows tablet buyer. We’ve also compared all five tablets using our standard benchmark suite, and present our results alongside some traditional laptops.

The tablets we were sent for review by the four manufacturers varied by price and configuration, but the lowest-priced base option is the Microsoft Surface Pro 7+—though adding a pen and keyboard elevates the price above the Lenovo ThinkPad X12 Detachable Gen 1. At the time of our latest update to this article, the two cheapest Surface Pro 7+ options were also sold out, making the standalone Surface Pro 8 the more affordable option.

Once kitted out with a keyboard and optional pen, each tablet is roughly similar in price, though your preferred configuration can alter that price significantly. Only the HP Elite Folio actually includes both accessories as part of the purchase price, however. Lenovo charges extra for a pen ($51.98 on Amazon) with 4,096 levels of pressure, and Microsoft suggests you buy its Surface Pro Signature Type Cover ($139 on Amazon) and Surface Pen ($89 on Amazon) for optimum functionality.

Dell informed us that while the company provided us with a pen and a tablet for our review, the Dell Latitude 7320 Detachable Travel Keyboard with an included pen costs an additional $199.99.

We’ve included the base pricing of our review units below as of press time, excluding the cost of any peripherals, with the price of our review unit in parentheses. Note that Lenovo offers substantial “discounts” for buying direct on its site.

We consider the lowest-priced model of the Dell Latitude 7320 Detachable, with 4GB of memory, too skimpy for everyday use. But if you don’t mind a Core i3, the minimum $899.99 configuration of the Microsoft Surface Pro 7+ is certainly feasible.

We prefer the Microsoft Surface Pro 7+ and Dell Latitude 7320 Detachable here, as they offer the best combination of features. Technically, only three are “traditional” tablets:  We’d categorize the HP Elite Folio as a 2-in-1, but the separate tablet and keyboard are wrapped together inside of a faux-leather sheath that connects both the tablet and keyboard as a single unit. Instead of physically separating, the Folio’s tablet can “pull forward” or swivel back like a traditional tablet. The others use integrated kickstands that allow the tablets to recline.

In all, the Folio is stronger and more stable than other tablets, but its design adds weight and removes some of the flexibility, too. On the Dell and Lenovo tablets, the connection between the keyboard and tablet is especially weak, so consider this if you like working with a tablet on your lap.

If your concern is which Windows tablet is the lightest, the answer is both the Lenovo ThinkPad X12 Detachable Gen 1 and Microsoft Surface Pro 7+, which both weigh in at 2.4 pounds. We’ve included the weights below from our scale:

There are noticeable differences in the displays. Both the Dell Latitude 7320 Detachable and HP Elite Folio offer larger 13.3-inch displays, while the other Surface Pro 7+ and Lenovo tablet include smaller 12.3-inch displays. The Surface Pro 8 splits the difference with a 13-inch screen. Which tablet offers the brightest display? That distinction goes to the HP Folio, with a blazing 1,000-nit option that’s ideal for outdoor work, or the Dell Latitude, with its 500-nit display. (We consider 250 nits the minimum for indoor work.) The tablet with the highest-resolution display is the Microsoft Surface Pro 8, at 2,880 x 1,920, though the others include 1920×1280 displays that look just fine.

Evaluating a keyboard is quite subjective, but all of them—with the exception of the HP Elite Folio and its shallow keys—were comfortable for prolonged work. (Keep those loose magnetic connections we referred to earlier in mind, though.) You shouldn’t notice any substantive differences with the trackpads, either.

Personally, I preferred  both the Dell Latitude and Microsoft’s keyboards over the others. The Surface Pro Signature Keyboard designed for the Surface Pro 8 feels the same under your fingers, but grips the tablet tightly. The rechargeable pen is especially useful.

While we’re not going to show you representative images from all of the webcams here, one tablet stands out: the Surface Pro 7+. Both the Surface Pro 7+ and the Lenovo ThinkPad X12 Detachable Gen 1 offer 1080p resolution on their user-facing cameras, but the color and white balance on the Surface Pro 7+ is head and shoulders above the others. The Surface Pro 8 is further optimized for color exposure as well, but overcorrects for skin tone.

We simply let our ears be the judge of which tablets offer the best audio. Here, we found that only the Lenovo’s speakers disappointed us. All of the other tablets performed well, with the usual caveat: Don’t expect that much in the way of bass from a flat tablet. You can always use headphones, though.

Windows on Arm laptops have a reputation for long battery life, and the HP Elite Folio absolutely lives up to the stereotype. The Elite Folio delivers 932 minutes (15.5 hours) of battery life, which is 54 percent more than either the Surface Pro 7+ or the Dell Latitude Detachable. The Surface Pro 8 slips a bit under those two, tying the Lenovo ThinkPad X12 Detachable Gen 1.

You may not care about what sort of applications are bundled with these tablets, but we do. All of them were refreshingly free of the “bloatware” cheaper PCs come saddled with. Two of them shipped with their own vendor-developed system utilities. These apps supplement or replace operating system tools, in that they can be used to update firmware, drivers, or other utilities without Windows getting in the way. Neither the Elite Folio nor the Surface Pro tablets do anything noteworthy here.

Lenovo’s Vantage software and Dell’s suite of Dell utilities are both superb, providing a central repository for warranty information, a hardware and software dashboard, manuals and more. While the Vantage suite is probably a bit more comprehensive, Dell’s utilities are more straightforward.

Aside from the HP Elite Folio, all of the tablets listed in our roundup include an 11th-gen Intel “Tiger Lake” Core chip inside and perform similarly.

The Elite Folio uses Qualcomm’s Snapdragon 8cx Gen 2 5G, an Arm chip that doesn’t quite allow you to run all of your preferred applications, even with emulation. (We’ll let the Elite Folio review explain further.) That limits which benchmarks we can run to test the performance of these tablets, and which laptops and thin-and-light PCs we can compare them to.

What we’ve done is use three representative benchmarks: PCMark 8 Creative, PCMark 10 Apps, and Cinebench R20. All three apps ran on all four tablets, giving us a comprehensive view of their performance. PCMark 8 Creative tests everything from general office work to light gaming and video/image editing. (PCMark 10 provides a more up-to-date, comprehensive test suite, but it won’t run on the Elite Folio.) PCMark Apps is a test of pure Office performance in Word, Excel, PowerPoint, and the Edge browser. Cinebench is a synthesized CPU test, but it tells us how well a more generic CPU-intensive application will perform.

In the graphs below, we’ve highlighted the four key tablets, alongside some older tablets and a couple of laptops. For a deeper dive into other benchmarks, our Dell Latitude 7320 Detachable review and Surface Pro 8 review includes results of all four tablets, save for the specialized Elite Folio results.

It’s true that the Arm processor forces some of our benchmark applications to run via emulation, which slows them down. But the performance gap is still profound.

Which Windows tablet should you buy? As you’ve seen, we crowned the Dell Latitude 7320 Detachable and the Microsoft Surface Pro 8 with our Editors’ Choice award for different reasons. The Surface Pro 8 offers cheaper configuration options, a solid keyboard, a high-resolution screen, and the best webcam. It’s best for consumers. The business-focused Dell’s Latitude 7320 Detachable offers more viewable screen area, a great keyboard, Thunderbolt ports, and a decidedly useful suite of utility apps. Of the two, battery life favored Dell’s tablet.

Your choice will likely be determined by the nuances. Yes, Microsoft’s tablet is far superior for lap work…but your tablet may be most often used on a desk. Do Dell’s robust system utilities matter? Perhaps you’ve already purchased one of our best 1080p webcams, and so Microsoft’s superior integrated webcam won’t influence your decision. Either way, we declare both the Dell Latitude 7320 Detachable and the Microsoft Surface Pro 8 as the best Windows tablets of 2021.

Correction (9/8/2021): Through a miscommunication, Dell informed us that while the company provided us with a pen and a tablet for our review, the Dell Latitude 7320’s detachable keyboard with an included pen costs an additional $199.99. Since this is primarily a business-focused tablet, we have not adjusted our rating. Update (10/14/2021): We have updated this roundup to add the Microsoft Surface Pro 8.