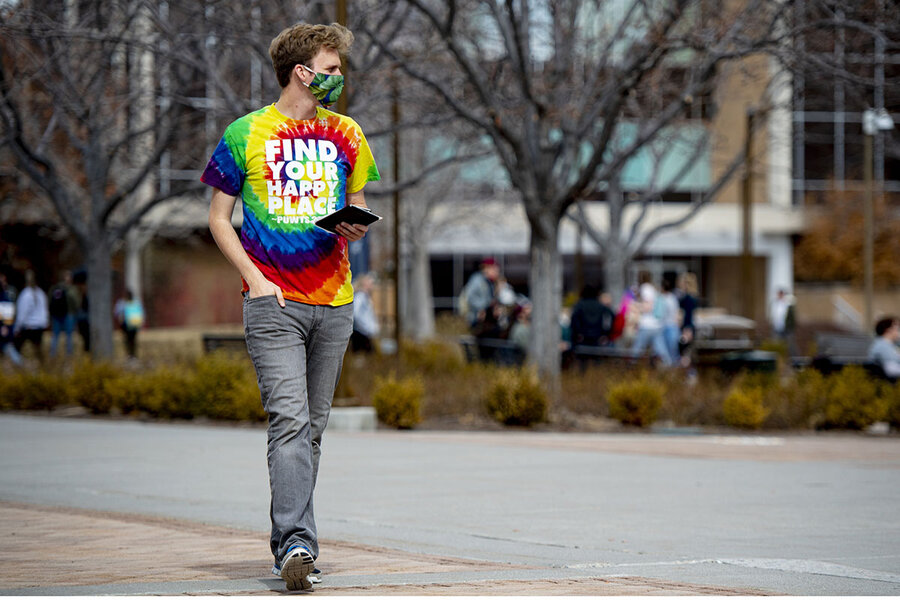 Both are accomplished attorneys, and both are advocates for causes that cut to the heart of their deepest selves. They are on opposite sides of what has been one of the nation’s most divisive and intensely personal political debates – about sex, gender, and the civic integrity of religious belief.

The clash between religious and LGBTQ rights is one of the most acrimonious in U.S. politics. But two women’s efforts show how mutual respect can reveal common ground and human connection. Part 3 in the Monitor’s Respect Project.

“Kim was always one of the tougher negotiators to be in a room with,” Ms. Pick says of Ms. Colby, who’s fought for religious freedom in cases before the United States Supreme Court. “She’s somebody in the room who’s always the last to concede on their side.”

“But it’s also amazing that, for all those ways that she’s so tough and guarded, she also just gives off a hell of a maternal vibe,” Ms. Pick adds.

Neither friends nor colleagues, really, each has cautiously participated over the years in a little-known effort to try to find a different approach to the nation’s media-labeled “culture wars.” In their personal capacities, they’ve been part of a nationwide group of legal scholars, advocates, and legislators exploring whether mutual respect can alter the ferocity of the nation’s political battles.

The movement calls itself Fairness for All, and its goal is to find a legislative compromise for issues that both sides see in identity-defining, existential terms.

To do that, it roots itself in a set of civic principles rather than specific policies – principles that must necessarily precede any possible solutions to these vexing national questions.

“How do we get to a postmodern society in which we’re not so fragmented, when, you know, we know our neighbors again, or we think of each other as neighbors, or we think of each other’s humanity first?” says Robin Fretwell Wilson, director of the Institute of Government and Public Affairs, who has helped organize the Fairness for All movement. “Or when we think, what are we willing to forgo in order for the other person to be made better?”

Within any adversarial system of law or democratic governance, the pursuit of perceived self-interests is often unavoidable and necessary. But it need not be the only motivator, many participants say.

“I became involved because I care about religious freedom, and I was interested in finding out whether there were people, those who want to open up the Civil Rights Act to protect sexual orientation and gender identity, who were also willing to even discuss protecting religious freedom,” says Ms. Colby. “In my experience, it’s been a fairly small set of people.”

Yet even such a small effort has meaning. At the heart of Fairness for All is a model of democratic pluralism, says Shirley Hoogstra, president of the Council for Christian Colleges & Universities, which has played a role in the Fairness for All movement. “It transcends the superficiality that can sometimes come from living alongside each other, because living alongside each other actually makes you angry, it gives you frustration, and maybe you feel like you can just say, OK, I’m done with you then.”

There is also a model for what success could look like. Part of the inspiration for Fairness for All remains the experiences of religious conservatives and LGBTQ people in Utah, one of the most conservative states in the U.S. After a bruising battle over same-sex marriage years ago, the sides began to talk together in earnest, expressing their mutual vulnerabilities and purposing to listen to each other, as many have described.

As a result, Utah remains the only conservative state to add new protections for LGBTQ people in its civil rights statutes. At the same time, it also bolstered its religious freedom protections, carving out spaces for certain vendors, government clerks, and others to remain true to their religious conscience.

“You don’t just say, I’m done with you,” says Ms. Hoogstra. “You’ve got to figure it out. You’re committed. You’ve made these promises to respect each other and persevere. And that doesn’t mean you just get to give up now.”

The connections made within Fairness for All have been both professional and profound.

Nearly 4 1/2 years ago, Ms. Pick says it was Ms. Colby who, as much as anyone else, provided her strength, comfort, and love during one of the most vulnerable moments of her life.

Both of them were part of a three-day retreat in December 2016 that included a group of eight legal scholars and advocates, four from each side.

Mutual vulnerability animated each side as the group sought a way to hammer out legislation that would honor the integrity of sincerely held religious beliefs while also expanding protections for LGBTQ people.

“Many religious people, but not all of them, of course, are concerned about how they are going to be treated in the coming days,” says Ms. Colby.

She notes how the traditions of Judaism and Christianity, as well as Islam, have for more than 2,000 years maintained that marriage between a man and a woman remains a sacred institution, and a fundamental part of God’s plan.

“How will those with traditional religious beliefs live out their ability to do what they believe God requires of them, or wants them to do?” she asks.

“That is very much a part of their core identity,” she says. “And as a matter of our place in culture, we’re basically being told now that we have to assume all of the risk – that these changes will be made one way or the other, and that, you know, we just have to sit by and assume that religious freedom will be OK.”

It is difficult to trust the other side when many label religious principles as a “freedom to discriminate,” or when simply holding a traditional view of marriage can result in ridicule and social ostracization.

That is one reason Ms. Colby emerged as one of the tougher negotiators in the room as the group addressed questions about wedding vendors participating in the ritual aspects of same-sex marriage, religious adoption agencies receiving federal funds, and gaps in civil rights laws that leave many LGBTQ Americans without legal recourse against discrimination.

“The more time I spend working on these issues, the more aware I am of just how many members of our community, and especially our youth, are hurting because … they’re still just being treated like a political football, which is hard as heck on people’s psyche,” says Ms. Pick.

She quickly emerged as Ms. Colby’s outspoken “archrival,” others at the meeting say.

But the night before the retreat began, Ms. Pick learned her grandmother had died. Having already lost her mother and father, she felt a wave of grief difficult to describe, she says.

A few people knew what she was going through. But she didn’t want to make her loss a distraction. “I mean, you don’t walk into a room like that, with so much at stake, and – there’s no crying in baseball,” Ms. Pick says.

In one of the early sessions, she and Ms. Colby were going at it “hammers and tongs,” she says, debating an especially sensitive question: What kinds of organizations can be considered religious, and thus protected under the nation’s laws in special ways?

Ms. Pick had to leave the room at times, however, to make the numbing logistical decisions necessary after a loved one dies: changing airline tickets, arranging the funeral, and informing others. In the middle of one of their breaks, she was in the hallway, near a corner, weeping quietly on the phone.

She looked up. Ms. Colby was standing a few feet away. When their eyes met, Ms. Colby held out her arms.

“And I let her hug me,” Ms. Pick says. “And it was just as powerful a moment as I have experienced. I was so exhausted, and I could only think it should have been my father, or somebody else, another family member to deal with all of this, but they were all gone.”

“So I was very much feeling the loss of my parents, and now one of the most important people in the world to me, my grandmother, so it was just – I will always remember that moment when she saw me as a human being and acted as,” she says, pausing. “At that moment, she was a mother to me.”

Ms. Colby says it was a meaningful moment for her, too.

“I just was amazed that she was able to focus on the work with all of the emotions she was going through,” she says. “This is very intense and draining work, and how is she doing this? My heart just went out to her and, you know, we hugged, and I think we even prayed together.”

“And then we went back in the room, and we started disagreeing again,” Ms. Colby says.

Their shared experience made a deep impression on the other negotiators, says Ms. Hoogstra of the Council for Christian Colleges & Universities.

“Those willing to repair deep rifts between communities also need inspiration,” she wrote in an essay with Professor Wilson, describing the three-day retreat. “They need to believe it is possible to heal old wounds, even if against long odds.”

“You can find those places where people with the deepest of differences can live alongside each other in a democracy,” she adds in an interview. “And it’s not based on whether you agree; it’s based on a set of virtues and civic values.”

The legislation Ms. Pick and Ms. Colby helped shape at the three-day retreat is similar to what has been called the “Utah compromise.” The bill was introduced to Congress in December 2019 by GOP Rep. Chris Stewart of Utah as the Fairness for All Act. Most religious conservatives and LGBTQ advocates rejected the concept, however.

Major advocacy groups like Human Rights Campaign have called it “an affront to existing civil rights protections” – a bill with “massive loopholes and carve-outs” that make its protections substandard, a compromise that would never be tolerated if applied to other civil rights categories like race.

Conservative religious groups including the Family Research Council decried the “unfairness of Fairness for All,” calling it a poorly drafted bill with “quite minimal” religious liberty protections that would only bring more, not less, civil litigation.

Today, Ms. Pick and Ms. Colby are on opposite sides of the Equality Act currently before Congress. The bill would amend federal civil rights laws to include explicit protections for LGBTQ people, while also curtailing certain exceptions for people with traditional religious beliefs and eliminating appeals to the federal Religious Freedom Restoration Act.

The bill is a case study in the acrimony that pervades the nation’s divides. It passed the U.S. House earlier this year in a sharply partisan vote but is unlikely to pass the Senate.

Looking back on the Fairness for All project, Ms. Pick recalls the swirl of emotions that led her to write a poem about the experience. It is titled “Grace at a Greasy Spoon, or When Two Professional Christians Asked the Professional Lesbian to Pray,” and she shared parts with the Monitor.

Even if my jaw felt rusty,
Even if my prayers are rarely spoken,
Even if I’d come armed for war,
Even as I’d hoped for peace,

Get the Monitor Stories you care about delivered to your inbox.

In the moment it took to bow my head, I wondered,
Was I being honored? Tested? Accepted?
There was no way to know.

And though I could not close my eyes,
Could not wholly set old fears aside,
I could offer up a silent prayer for the words to come, and hope
For something true.