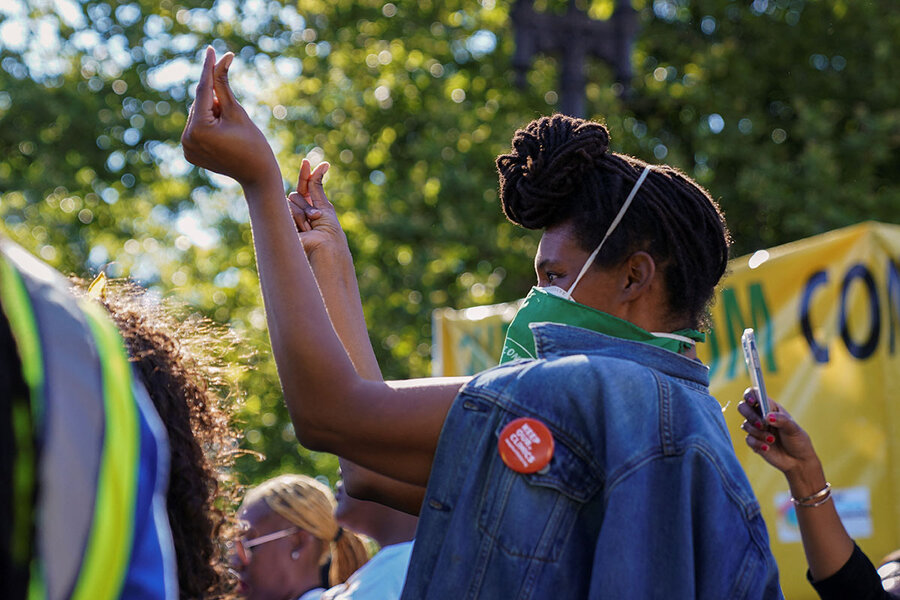 For many Black and other minority women, abortion has long been inaccessible due to financial and cultural barriers, even though Roe v. Wade gave them the right. That’s why they began reframing reproductive rights as a matter of social justice in the 1990s.

Implicit in this movement for reproductive justice, or RJ as it’s often called, is support for abortion rights, but it entails a more expansive view, since it also focuses on the right to have children and to nurture them in a safe and healthy environment. An encompassing social justice movement, RJ has grown alongside a larger reckoning on racism, inequality, and environmental rights – not the simple binary of “pro-choice” or “pro-life.”

Rejecting a rigid “pro-choice” or “pro-life” binary, reproductive justice advocates see women’s right to parent – or not – as an encompassing social justice issue, requiring cooperation on matters like voting rights and overpolicing.

“In this country, it’s always an either/or … an ‘us and them’ thing, instead of a ‘we’ thing,” says Toni McClendon, a founding member of New Voices for Reproductive Justice in Pittsburgh.

Toni McClendon has fought for reproductive and minority rights in Pittsburgh for decades. But she has long eschewed the labels “pro-choice” and “pro-life” as divisive, limiting and above all failing to address what many Black women experience in America’s shrill reproduction debate.

Then, when she was asked to join Black women from the Rust Belt for the March for Women’s Lives in Washington in 2004, she found “reproductive justice,” a movement that went beyond that simple binary to cooperate with allies on a host of issues facing minorities – and one that has come to the fore as American women wait to see if Roe v. Wade will be rolled back. Ms. McClendon returned home from the march to become one of the founding members of New Voices for Reproductive Justice in Pittsburgh.

Rejecting a rigid “pro-choice” or “pro-life” binary, reproductive justice advocates see women’s right to parent – or not – as an encompassing social justice issue, requiring cooperation on matters like voting rights and overpolicing.

As the U.S. Supreme Court appears poised to overturn America’s constitutionally protected right to abortion in its upcoming ruling on Dobbs v. Jackson Women’s Health Organization, those on the front lines of the reproductive rights movement frame it as a door closing after 50 years of abortion access.

But for many Black and other minority women across the country, the entryway to abortion access has long been shut by financial and cultural barriers. That’s why they began reframing reproductive rights as a matter of social justice in the 1990s.

Now the leaders of reproductive justice, often called RJ, say their vision is the way forward for those who will be made most vulnerable if the leaked draft opinion stands, returning the abortion question to the states.

Toni McClendon, a founding member of New Voices for Reproductive Justice in Pittsburgh, says the terms “pro-choice” and “pro-life” simply divide the American public. The reproductive justice movement has a more expansive view of reproductive rights that builds coalitions with other social justice movements.

Implicit in the RJ movement is support for abortion rights, but many observers say RJ has the potential to help Americans understand a much more expansive view, since it also focuses on the right to have children and to nurture them in a safe and healthy environment. An encompassing social justice movement, RJ has grown alongside a larger reckoning on racism, inequality, and environmental rights.

“RJ is a way of the future,” says Elaina Ramsey, executive director of Faith Choice Ohio, a faith-based group that supports abortion rights and works with RJ leaders in the Midwest. “It’s fundamentally a lifestyle practice. They’re trying to build communities, raise families whatever they look like and with whatever decisions they want to make.”

“Settled law but not settled reality”

Since its founding in the 1990s, RJ has grown across racial and ethnic lines and across the United States, from the Pacific Northwest to the Rust Belt. For example, Black women from around the country joined RJ advocates in Washington over the Juneteenth weekend in a march dubbed Black Bodies for Black Power.

It’s also increasingly a campaign issue. La’Tasha D. Mayes, founder and former executive director of New Voices for Reproductive Justice, is running for office as a state representative in Pennsylvania, having scored the Democratic primary in May. “White women thought Roe v. Wade was the end of the attack or that the legal precedent would actually get us where we need to be,” says the candidate, who put RJ as her top platform issue. “But for Black women and marginalized communities, it was settled law but not settled reality.”

“The shorthand in politics is pro-choice, a woman’s right to choose,” she continues. “Those things are so limiting in terms of the actual depth and breadth of reproductive justice issues or concerns that voters and constituents have.”

The term “reproductive justice” was coined by 12 Black feminists, and later the movement was turned into a collective called SisterSong, based in the South. The founders felt shut out of the discussion on reproductive rights, despite the disproportionate toll that pregnancies and unwanted pregnancies take on minority women. According to 2011 data from the Guttmacher Institute, the unintended pregnancy rate for non-Hispanic Black women (79 per 1,000) is more than double that of non-Hispanic white women (33 per 1,000) – often because of a lack of access to reproductive services and contraception. Minority women overall face far higher rates of preterm deliveries and infant mortality, and they suffer worse maternal health outcomes and criminalization around reproduction.

But Black women have been skeptical of reproductive rights movements that were tied historically to forced sterilization, says Ms. McClendon. “What most people knew about reproductive health was Planned Parenthood,” she says, an organization that lost the Black community’s trust due to co-founder Margaret Sanger’s ties to eugenics.

Demonstrators, including reproductive justice advocates, walk to the U.S. Supreme Court during the Black Bodies for Black Power rally in Washington, June 18, 2022. Since its founding in the 1990s, RJ has grown across racial and ethnic lines and across the U.S., from the Pacific Northwest to the Rust Belt.

“The idea of choice was really limited as a framework because of these histories, because of the fact that for many communities of color, choice wasn’t just about whether or not you could have an abortion. It was about whether or not you could actually have children,” says Zakiya Luna, author of “Reproductive Rights as Human Rights: Women of Color and the Fight for Reproductive Justice.”

“What we’re trying to do … is to say there’s a range of reproductive justice issues that, particularly in marginalized communities, choice does not get at,” she adds.

That range of issues invites cooperation. “I find so much common ground with reproductive justice,” says Destiny Herndon-De La Rosa, founder of the anti-abortion New Wave Feminists in Texas, which seeks an end to abortion through systematic change. She says the RJ movement recognizes that everything from racism to overpolicing has impacted Black women’s reproductive choices. “It’s a much more nuanced perspective. … So they’re not fighting for it in the same way that a lot of more privileged white feminists are fighting for it.”

While the Black feminist community launched RJ, the movement has entered the discussion in nursing schools, law schools, and even the White House. Sometimes the term is co-opted, and those working in it are careful to honor its roots as a Black movement.

RJ advocates have shown the feminist movement how exclusive it’s been, says Greer Donley, assistant professor of law at the University of Pittsburgh. “We’re really trying to forge allies with a huge cohort of people in a way that the reproductive rights movement of generations past has not. I think we’re kind of at this moment because that model failed,” she says.

“Building those coalitions now in this crisis moment, and moving forward to collectively imagine a new vision to uplift this vision that they’ve had for a long time, is just incredibly important.”

The party of work? Sen. Rick Scott on GOP plans to retake Senate.
Can you be feminist and ‘pro-life’? The women who say yes.