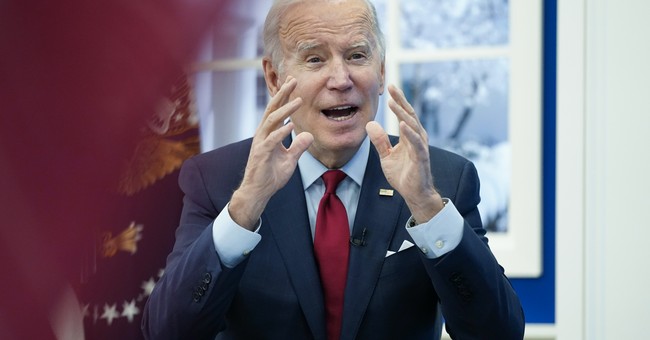 But there was a big voice in the “voting rights” movement who was missing from the speech today — Stacey Abrams. It’s her issue and her state, yet she was conspicuously missing to meet Biden. Not exactly a good look. Biden tried to cover it, saying that they “got [their] schedules mixed up.”

.⁦@POTUS⁩, ahead of voting rights speech in Georgia, said he spoke to ⁦@staceyabrams⁩ this morning and they got schedules mixed up (she is not attending his speech) but are on the same page. pic.twitter.com/dfhfod8aEe

So, he comes to town to talk about your issue and you don’t fix your “scheduling issues” to meet with him? That says everything right there about what they think about Joe Biden and the alleged threat to voting rights.

Embarrassing for the White House.

That’s about the size of it. There’s no real threat, and they know it. It’s about control and doing all they can to federalize elections.

But that wasn’t the only confusion on the day for Biden. He also called Kamala Harris “President Harris” again.

This isn’t the first time he has called her “President Harris.” The last time was in December during his lie-a-palooza, commencement remarks at South Carolina State University, where he said, “All kidding aside, President Harris was a proud Howard alum.”

Harris had her own ridiculous blustering she pushed about the filibuster, as well, when she referred to the filibuster rules as “arcane.” What? So arcane that the Democrats used them 327 times in 2020? Guess they weren’t arcane and “racist” then?

Funny how that all works. Did they suddenly just become arcane now?

The thing that’s truly funny is all the effort the Democrats are putting into this, and they are on track with all their nonsense to lose the Senate in 2022. If they do, then if they were able to eliminate the filibuster, they would then be whining about how the elimination of the filibuster was evil and racist, like clockwork. But then they will be locked into the mess of their own making — and they will deserve it. They don’t have the votes now, as I noted earlier, and it’s not just Sen. Joe Manchin (D-WV) and Sen. Kyrsten Sinema (D-AZ).

Finally, it should be noted that Biden almost went down that road of lying about his civil rights activism again, but he seemed to stop himself, midway.

Did Joe Biden just claim he was arrested during the civil rights movement? That never happened. pic.twitter.com/VcKVS2hrN8

I’m not sure which lie that started to be, maybe the arrest on the way to see Nelson Mandela lie. So, I’ll have to give him credit for stopping mid-lie. But, he still tried to leave an impression in the audience’s mind again. Just to remind everyone, here’s how Joe Biden 1987 had to correct his prior lies about marching for civil rights.

BIDEN TODAY: “I got involved in the civil rights movement.”

BIDEN IN 1987: “I was not an activist…I was not out marching. I was not down in Selma.” pic.twitter.com/QG6UQQ2A7a

Gov. Ralph Northam is 99 percent sure he knows who the guy in blackface on his yearbook page is
Conservatives Would Be Foolish to Not Take Michelle Obama Seriously