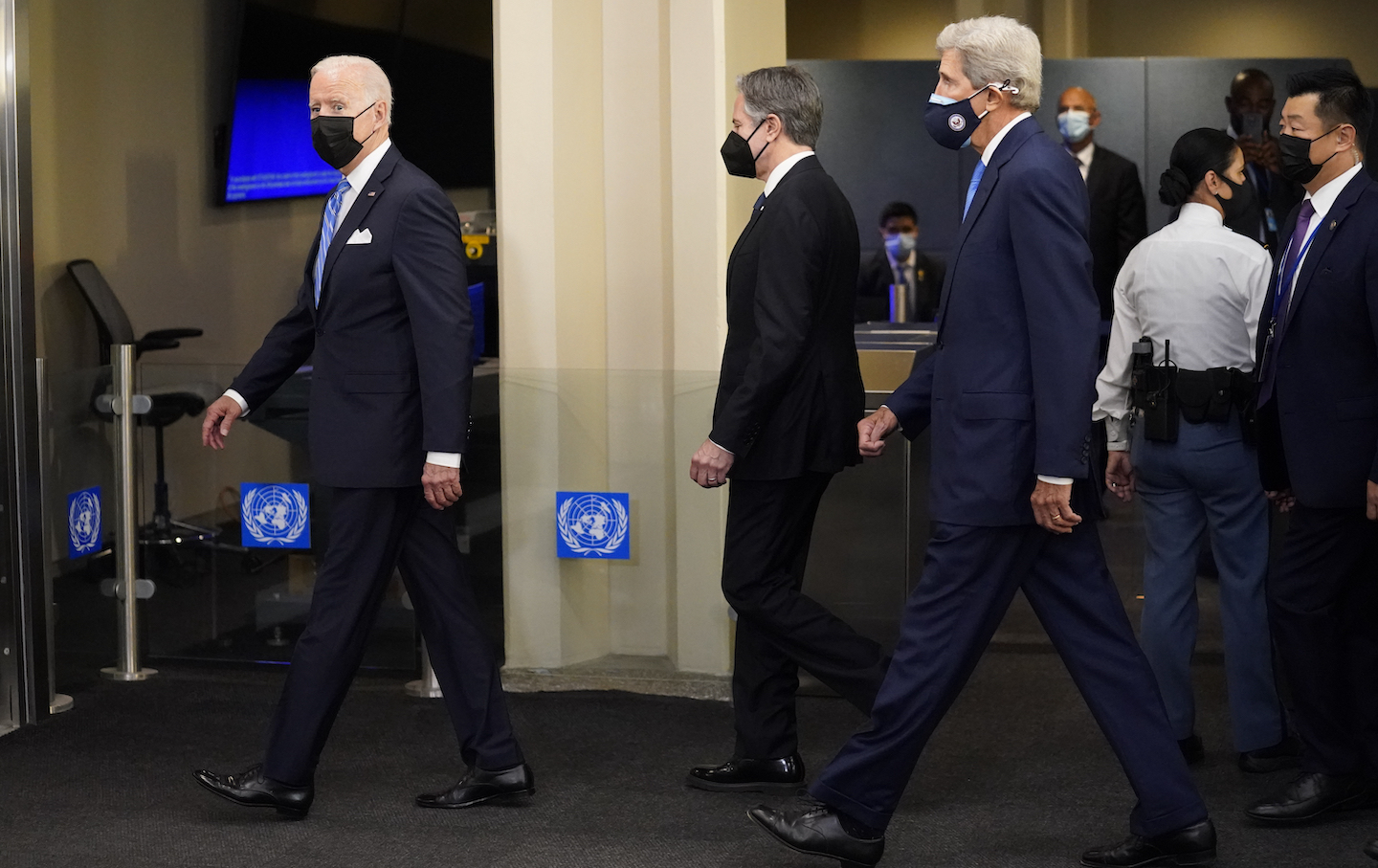 Like many world leaders, President Joe Biden is running out of metaphors to sound the alarm about our climate crisis—and we are running out of time. When he toured the damage on the East Coast from Tropical Storm Ida, he declared that we are at “code red.” Weeks later, appearing before the United Nations’ General Assembly, he warned that we are “fast approaching a point of no return.”

The question is what President Biden intends to do about it. Starting on October 11, a weeklong mobilization of climate activists called The People vs. Fossil Fuels aims to put the White House’s climate record to the test—right outside the White House.

For months, considerable attention has been paid to the congressional scrum over the multitrillion-dollar Build Back Better Act. The proposal is billed as a once-in-a-generation opportunity to turn the corner on aggressive climate policy-making, which would be a welcome change from decades of delay, denial, and distraction.

But climate action does not need to rely on walking a legislative tightrope in order to please a single senator whose family fortune hinges on protecting coal industry profits. There are a number of areas where the Biden administration could take action to show it is as serious as its rhetoric would suggest. So far, the White House is largely failing to answer its own emergency signal.

Almost immediately upon taking office, President Biden canceled the Keystone XL oil pipeline, a victory that was the result of many years of grassroots organizing struggle. But the president failed to lift a finger to stop the Line 3 tar sands oil project in Minnesota, ignoring a passionate resistance led by indigenous groups defending their water and land.

As a candidate, President Biden promised to end fracking on public lands. In office, though, he has approved new drilling permits at an astonishing pace. When the administration instituted its moratorium on new drilling leases, it promised a report that would lay out its vision for public lands. The report has still not been released, and the White House’s failure to appeal an unfavorable court decision on its leasing freeze signals that it is simply unwilling to fight for the principles that Biden espoused on the campaign trail. Indeed, a massive sale of offshore drilling leases in the Gulf of Mexico is scheduled for next month.

President Biden has powers he is deciding not to use. He could instruct his federal agencies to stop approvals of new fossil fuel infrastructure—an action that would be in line with the recommendations coming from climate scientists worldwide.

This would be an unmistakable move in the right direction, since it is essential to stem the supply of fossil fuels in the first place. We cannot address the climate crisis if the administration continues to back policies that support more fossil fuel development. Furthermore, developing new sources of clean energy will not matter much if we continue drilling and fracking, building new gas-fired power plants and pipelines, and approving proposals to export fossil fuels around the globe.

Instead of reining in the industries that have created this chaos, Congress is still arguing over whether to continue handing over billions of dollars in subsidies every year. Many Democratic lawmakers have joined the call to end polluter giveaways, and a recent Data for Progress poll found that voters support this sensible approach. One would think that politicians who feign concern over the size of the Build Back Better Act would see the virtue in ending $20 billion in yearly support for profitable fossil fuel corporations, but they appear eager not only to continue these unconscionable handouts but even to expand them, teeing up over $25 billion a year in new subsidies for pipelines, so-called “carbon capture” scams, and new hydrogen infrastructure.

As it stands now, the fate of much of the Biden administration’s climate agenda hangs in the balance, as lawmakers attempt to craft a reconciliation spending package that can win the support of two senators. The climate movement knows the stakes—and knows that we must get more directly from the White House. Starting on Indigenous Peoples’ Day, we will ask the president to take a side in our struggle: It’s The People vs. Fossil Fuels.