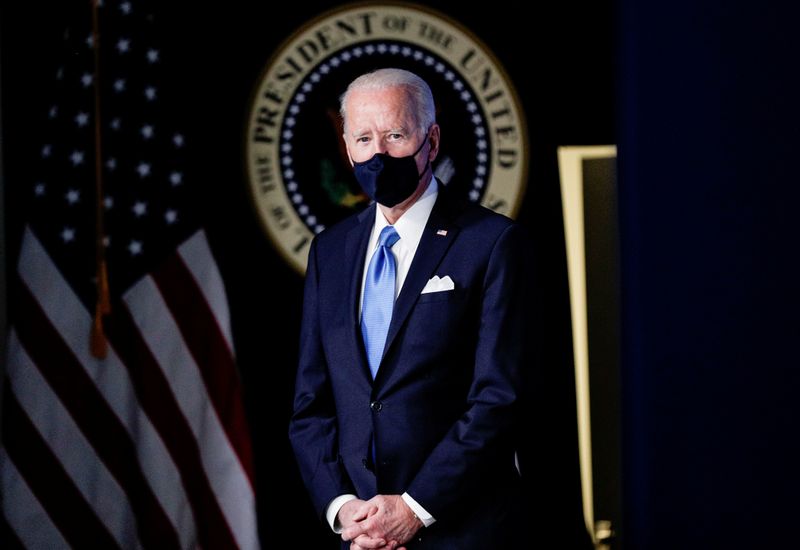 
By Steve Holland and Andrea Shalal

Biden will launch the effort with a White House ceremony on Friday to sign the bill, one of the largest economic stimulus measures in U.S. history and his first big legislative victory since taking office in January.

His administration then plans to take its sales pitch on the road, with Biden visiting Pennsylvania on Tuesday and Vice President Kamala Harris heading to the Western United States, for stops in California, Colorado and Nevada on Monday and Tuesday, White House officials said.

The massive legislative package, which received final congressional approval on Wednesday, passed with Democratic majorities in the U.S. House of Representatives and the Senate, but no Republican votes, despite broad popular support.

The bill will send $1,400 checks to millions of households, extend unemployment benefits and put billions of dollars into state budgets and industries after a year-long pandemic that has killed over 526,000 Americans and put millions out of work.

But Biden is not taking the bill’s immediate popularity for granted, especially after what befell former Democratic President Barack Obama, whom Biden served as vice president.

In 2009, Obama spent little time promoting a more than $800 billion stimulus program he and fellow Democrats pushed through Congress to rescue the U.S. economy after he inherited a deep recession from Republican predecessor George W. Bush.

The measure included stimulus checks, tax cuts and other support for businesses, workers and the unemployed, even as some economists said it did not go far enough.

But Republicans, who almost unanimously opposed the measure, captured the House of Representatives in 2010, narrowed Democrats’ lead in the Senate and proceeded to torpedo most Obama policies.

White House spokeswoman Jen Psaki, a veteran of the Obama administration, told reporters on Wednesday: “We didn’t do enough to explain to the American people what the benefits were” in 2009.

Joshua Karp, a Democratic strategist who most recently worked on Jaime Harrison’s unsuccessful U.S. Senate campaign in South Carolina, said it was important for Democrats to “go out and tell people about what this bill does and who this bill helps.”

The White House plans to put surrogates and senior administration officials on local TV in markets across the country and mobilize more than 400 mayors and governors to talk about what the plan means for them and their communities.

“At every step of the way, we’re going to communicate how this will make their lives better,” deputy White House chief of staff Jen O’Malley Dillon said in an internal staff memo seen by Reuters.

In 2009, the U.S. economy was still contracting as the ripples of the banking crisis spread. The Biden stimulus comes as the economy is forecast to grow as much as 7% this year as the country reopens.

Republicans say Biden and the Democrats never really made a serious effort to try to win some of them over and that voters will sour over the size of the legislation, which they say will deepen deficit spending.

Representative Liz Cheney, the House’s No. 3 Republican, previewed how her party might attack the measure, saying in a statement that only a small fraction of the $1.9 trillion was aimed at the virus, and warning it might lead to tax increases.

Presidential historian Thomas Alan Schwartz said the pandemic bill’s popularity could reverse a long-standing pattern in which the party that takes control of the White House loses seats in Congress in the next election.

“I think it could lead to a very positive aura to the presidency and to this sense that it’s ‘morning again in America,'” he said. “The danger is that it comes to be seen as too much and in particular if some prices start to soar.”