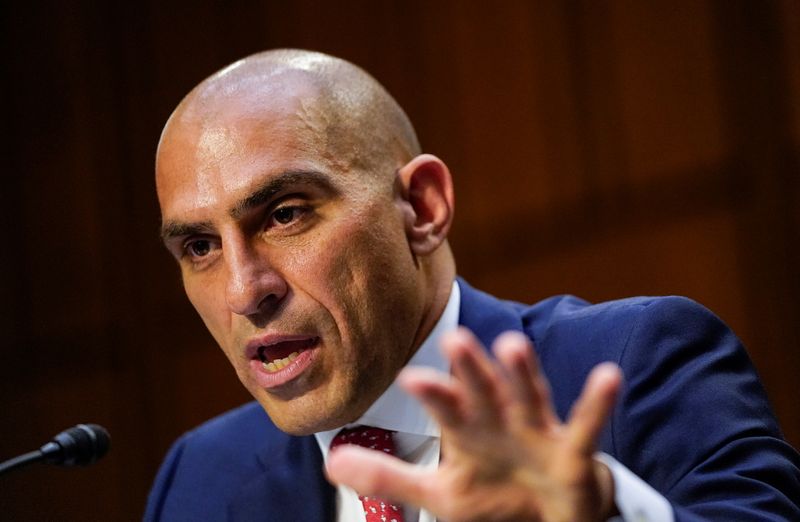 © Reuters. Rostin Behnam testifies before a Senate Agriculture, Nutrition, and Forestry Committee hearing on his nomination to be chairman of the Commodity Futures Trading Commission (CFTC) on Capitol Hill in Washington, U.S., October 27, 2021. REUTERS/Elizabeth Fra

By Chris Prentice and Pete Schroeder

WASHINGTON (Reuters) -U.S. President Joe Biden’s pick to head the U.S. Commodity Futures Trading Commission (CFTC) on Wednesday signaled that climate risk and the rapid adoption of digital currencies would be top priorities if he is confirmed to the role.

Rostin Behnam, a Democratic commissioner at the CFTC since 2017 and its acting chairman, laid out his vision for the agency before the Senate Agriculture Committee, a significant first step in reinvigorating an agency seen as languishing for months without a permanent pick to head it.

Behnam touted the CFTC’S ongoing work to monitor derivatives, noting that corner of the financial markets “performed very well” during the hectic onset of the COVID-19 pandemic in early 2020. He also said he would ensure an active enforcement program at the agency if given the top job.

“I will prioritize policy that invigorates a culture of compliance, reinforced by an enforcement program that roots out fraud,” he said in his opening testimony.

Behnam also said he would support any legislation Congress would consider to give the CFTC greater authority over digital currencies, arguing the rapidly growing market could benefit from clearer oversight.

“Given the size, the scope, and the scale of this emerging market … I think it’s critically important to have a primary cop on the beat,” he said.

Behnam has made climate issues a core of his work at the CFTC. In March, he set up a climate risk unit dedicated to better understanding and pricing climate-related risks into derivatives markets. He also backed a 2020 report from the CFTC’s industry advisors that called climate change a significant risk to the financial system.

On Wednesday, he said monitoring climate risk in financial markets was important. He said climate change does not yet pose a systemic risk to the financial system, but could in the future if severe weather events become worse and more frequent.

However, he added that derivatives could play a “key role” in any market-based policies to address the issue.

Behnam’s nomination comes at a time when the CFTC is short-staffed.

In October, Democratic Commissioner Daniel Berkovitz stepped down, leaving the agency politically frozen with just two active commissioners – Behnam and Republican Commissioner Dawn Stump. Biden has also nominated law professor Kristin Johnson to serve as a Democratic member, but she has not yet been confirmed.