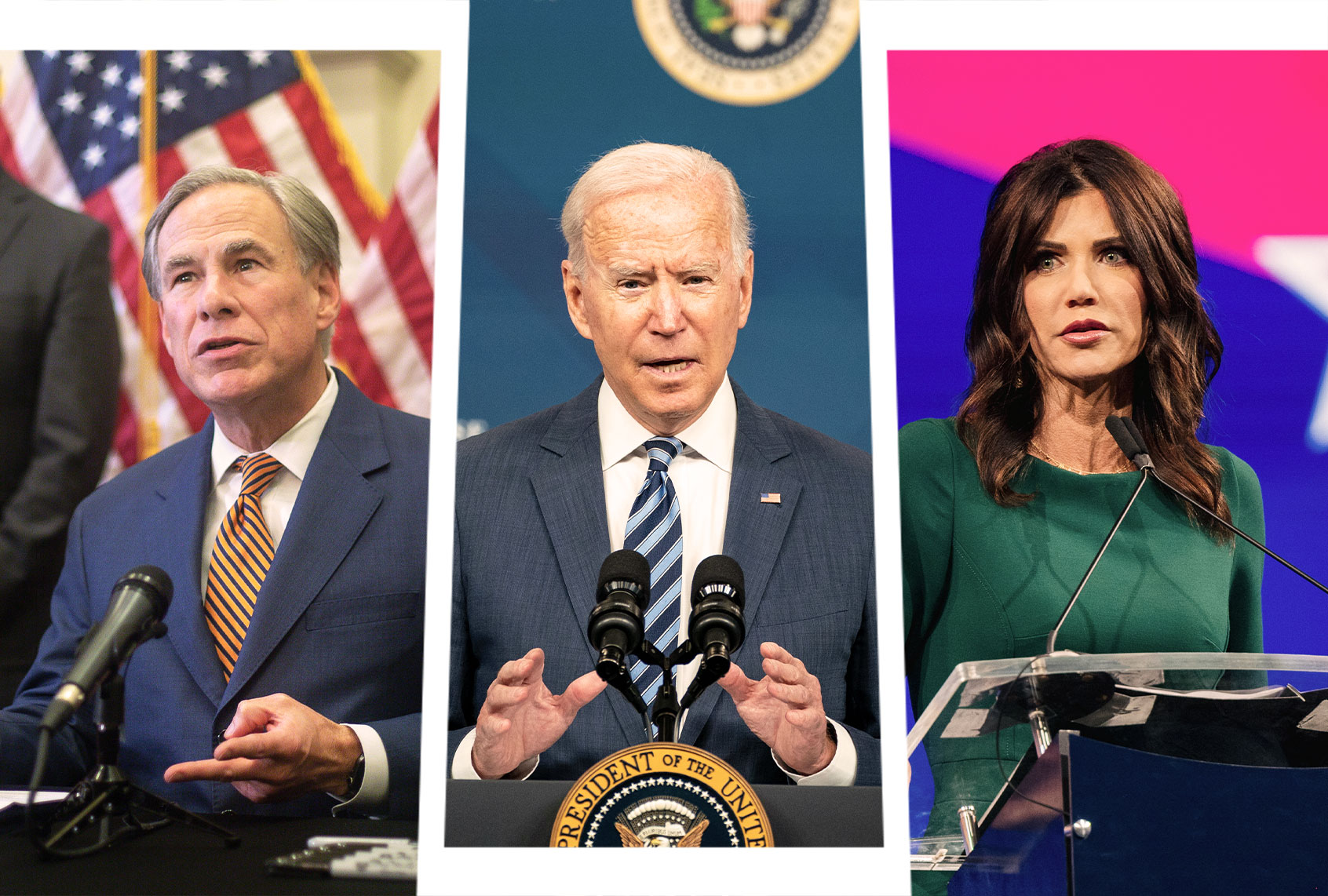 Republican leaders are really mad about President Joe Biden’s executive order issued last week, which mandates vaccination or weekly COVID-19 testing for employees of any company with 100 employees or more. Within less than a day, the battle cry of the virus’s best advocates was ringing out across the land: We’ll sue!

Texas Gov. Greg Abbott declared that he was “working to halt this power grab.” South Dakota Gov. Kristi Noem, always on hand to assist the coronavirus’s efforts to reproduce wildly, declared, “see you in court.” When it comes to a virus and its mindless pursuit of human hosts to infect, this disease has no better friend than the modern GOP.

In this, however, Republican leaders are out of step with the majority of the public, which believes that vaccines should be mandated for workers. Of course, there’s nothing new about Republicans embracing unpopular ideas. What makes this a shocking twist is Republican opposition to vaccine mandates puts them at odds with the larger business community.

Over the weekend, the Washington Post reported that many business leaders — even those who are stalwart Republicans generally — are pleased with Biden’s vaccine mandate. That’s because — as Republicans understood when Donald Trump held the White House but seem to have forgotten since then — pandemics are bad for business. “The reality is there are a number of businesses that are wanting the government to step in. This gives them the cover to do what they want to do anyway,” Charles Shipan, a political scientist at the University of Michigan, told the Post.

Want more Amanda Marcotte on politics? Subscribe to her newsletter Standing Room Only.

As one business leader in Texas explained, companies want their employees fully vaccinated and back to regular work life, but often shy away from mandates out of fear “that some workers would quit rather than submit.” Now that it’s required for all companies of a certain size, however, there’s nowhere else for such workers to go.

Also, the more people who vaccinate, the sooner Americans can return to normal life — which is good for the corporate bottom line. This was a classic tragedy-of-the-commons problem, the sort of thing that government regulation is designed to fix.

The end result is that the interests of corporate America are now squarely at odds with the Republican Party, at least when it comes to the pandemic. This is, needless to say, unusual. The GOP coalition has long been a sometimes uneasy alliance between wealthy corporate interests and a voting base that is more interested in red meat bigotries than marginal tax rates. Still, the interests of the rich corporate benefactors almost always come first for Republican politicians. Even Trump — who ran by appealing not just to the raw racism of the base, but to their desire to hear a Republican president promise he would protect the social safety net so many of them rely upon — backtracked in office and instead shaped his policies to serve the demands of wealthy elites instead of the Medicare-loving base.

The pandemic creates a clear-cut conflict between capitalist interests and culture war politics. Corporate leaders oppose the pandemic, but the culture warriors have sided with the virus and against anyone who tries to implement measures to slow its spread. By making these threats to sue, especially if they make good on them, Republicans are picking the spittle-flecked redhats screaming invective at school boards over the Brooks Brothers set.

The reason is certainly not because the GOP leadership has gone “populist” in any meaningful sense. If they actually cared about the interests of the hoi polloi they rely on as voters, they would be all for these vaccine mandates, which are needed to slow the pandemic’s current tear through red-state America.

By feigning outrage over the mandates, Republican leaders reinforce a message that’s been emanating from all corners of right-wing media: being a “good” Republican means refusing the vaccine. The likely reason that Republican leaders and propagandists are in conflict with business leaders over this is because continuing the pandemic is the linchpin of their 2022 midterms election strategy.

As Greg Sargent of the Washington Post pointed out last week, “After having gone to great lengths to impair our response to covid at best, and to actively sabotage it at worst, Republicans will claim the covid resurgence is only the fault of President Biden and Democrats.” While there are some people still telling themselves it’s impossible that the same people who backed Trump would do something this slimy, it’s been evident for some time now that Republicans are running the same playbook on Biden’s efforts to end the pandemic that they did on Barack Obama’s efforts to heal the country during his presidency: Sabotage the effort and pin the blame for the continued misery on the president and his party. It’s a strategy that requires using their own followers as bioweapons in their effort to hamper Biden’s success, but as anyone who watches Fox News for even an hour can tell you, treating their voters as cannon fodder clearly doesn’t tickle the conscience of GOP leaders and pundits.

Wealthy right-wing propagandists worked so hard to keep their viewers from taking safe, life-saving vaccines, and are pissed that it might all have been for naught. pic.twitter.com/VY9Zzon8G8

Perhaps the outrage over the vaccine mandate is real, but not because of “freedom” or any of the other empty excuses Republicans are hiding behind. It’s because Biden is messing with their 2022 midterm strategy. If this mandate works and brings COVID-19 under control, it blows up GOP plans to run on claims that Democrats “failed” to end the pandemic. Never mind that it’s Republicans who are actually to blame for discouraging vaccination. These folks are willing to kill thousands of Americans a week in a bid to get a political advantage over Biden, so they’re not going to be constrained by the moral imperative to be honest.

Want more Amanda Marcotte on politics? Subscribe to her newsletter Standing Room Only.

Biden’s vaccine mandate threatens not just to save thousands of lives and return the country to normal, but to derail the GOP’s maximally cynical and deadly 2022 political game plan.

Whether or not it will work remains, of course, to be seen. Much depends on how quickly companies comply with the executive order. If companies act quickly to implement the mandate, it’s likely many, if not most, will not bother to roll it back even if there are lawsuits against it. In the end, the results will be most visible in the vaccination rates — if they start to climb rapidly, it’s a sign that Biden’s mandate is working. If not, it’s a sign he didn’t go far enough and needs to move quickly to do things like banning the unvaccinated from flights before the holiday season gets underway. But whoever prevails, this entire situation underscores how much the GOP has come to rely on grotesque and often nonsensical culture war politics to gain power. They aren’t just willing to kill their own people, either, but now are turning their backs on the interests of the monied elite that they traditionally serve.

The culture war is no longer just a tool, but everything to the GOP. They are willing not just to let untold numbers die for their culture war, but even, shockingly, to let the profit margins of corporate America suffer.