That backdrop is what makes the current tech situation all the more eye-grabbing. The “Big 5” tech giants — Apple, Amazon, Facebook, Microsoft and Alphabet, Google’s parent company — have shrugged off last March’s coronavirus-induced selloff, adding $3.06 trillion — that’s trillion with a T — to their combined market caps over the last year.

Apple has been the biggest winner, seeing its valuation nearly double in the last year to a hair more than $2 trillion. The pandemic did little to curb consumers’ willingness to spend on Apple products, with Apple selling a record $65 billion worth of iPhones during the holiday quarter alone.

Apple’s big year has helped it pull away from Microsoft in the battle for the claim to being the world’s richest company, with Microsoft “only” worth $1.8 trillion after seeing its valuation soar 55% since last March.

The chart below highlights how big tech has continued to grow during the pandemic: 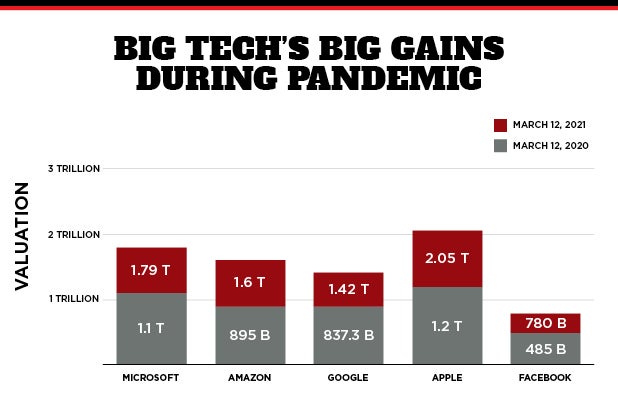 What’s behind the monster tech rally? Gerber Kawasaki financial advisor Brett Sifling said there are a few factors at play.

The first is that over the last year, we saw Wall Street “split into two sectors,” Sifling explained, with the physical economy represented on one side, and the digital economy on the other. With much of the physical economy (like companies in the air travel, hospitality and live entertainment spaces) shut down or at least hampered over the last year, investors were looking to put their money into companies that were better positioned to weather the pandemic.

Not coincidentally, Amazon has seen its stock price jump from about $1,820 per share at this time last year to $3,113 heading into Friday. Investors recognized that while many small and medium sized businesses were forced to shut down, Amazon’s array of businesses — ecommerce, hosting websites, Twitch and Audible, among just a few — were relatively unscathed. (Amazon ultimately hired more than 400,000 people last year to keep up with demand.)

This trend went beyond the Big 5 tech giants, too. Companies like Netflix and Zoom have seen their valuations skyrocket over the last year, as investors gravitated towards products they were compelled to use during lockdowns. (Netflix added a company-record 36 million subscribers last year, pushing the streaming heavyweight to 203 million global accounts.)  The same went for messaging apps like Snapchat and Twitter, as people looked to stay connected while apart or keep up-to-date with the latest coronavirus and election news. 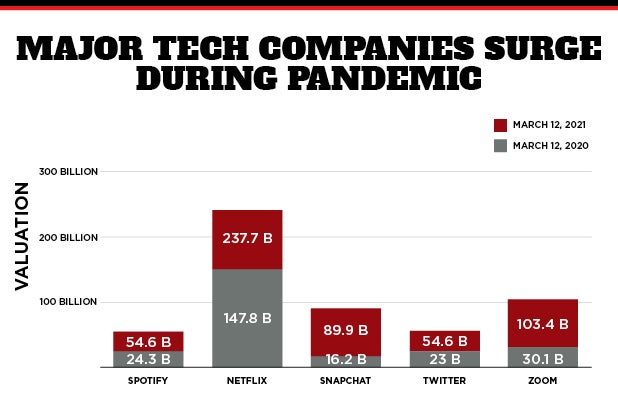 It’s also worth acknowledging the overall economic picture when assessing tech’s huge year. Low interest rates and an influx of cash from the stimulus checks essentially forced many new investors to turn to the stock market, if only as a hedge against inflation.

“People have been kind of pushed into the stock market,” Sifling said, “because there’s really nowhere else to generate a return. So people would much rather buy a stock than essentially earn nothing (leaving their money in the bank).”

Setting aside the reasons why it happened for a moment, it’s still jarring to simply look at tech’s performance over the last year in comparison to other economic metrics. Here’s one way to look at it: While the Nasdaq increased a whopping 87% since this time last year, the unemployment rate jumped from 3.5% entering March 2020 to 6.2% as of this week; at one point last April, the unemployment rate was nearly 15% — the highest it had been since Franklin D. Roosevelt was in office. In other words: the tech rally has been divorced from the economic pain millions of Americans have endured.

And now, as millions of vaccines are administered each day and the economy continues to reopen, tech is even more entrenched than it was before. Instead of stumbling, the big 5 tech giants — as well as a number of other multi-billion dollar companies — are bigger and richer than they were at the start of the pandemic. Looking ahead, it’ll be worth seeing if this momentum carries on, or if President Biden — who inherited a Justice Department antitrust lawsuit against Google and an FTC antitrust lawsuit against Facebook — decides to crackdown on Big Tech.