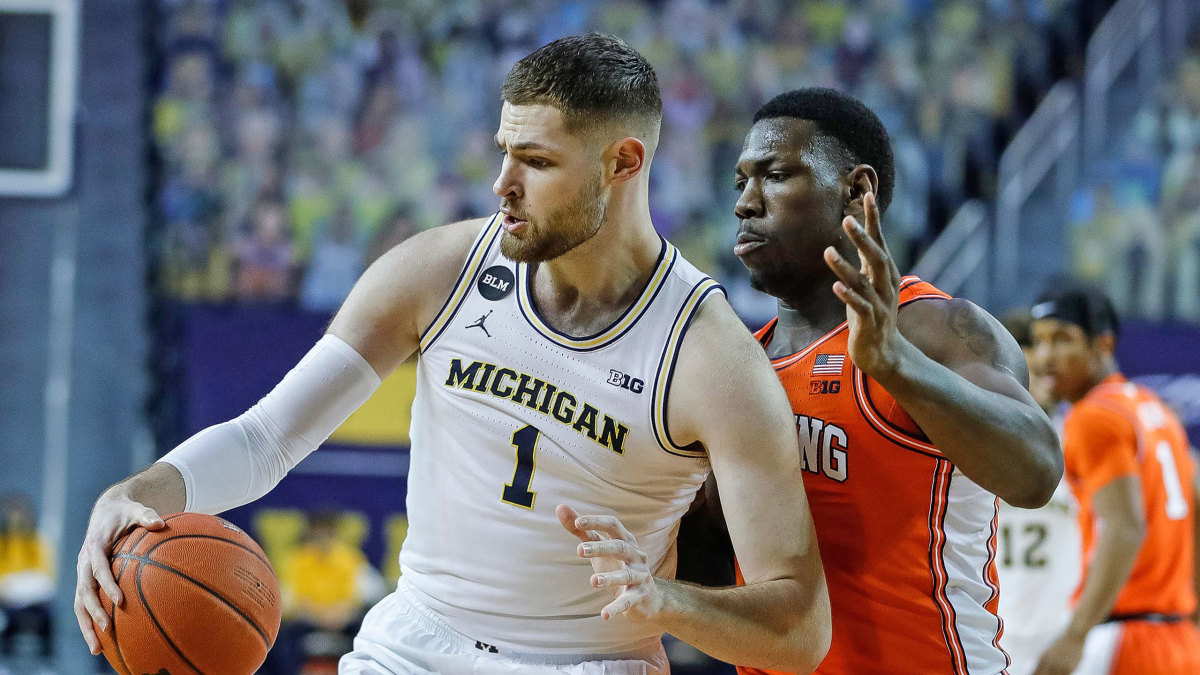 As part of Sports Illustrated’s preview of the 2021–22 men’s college basketball season, we’re breaking down each of the seven biggest conferences (AAC, ACC, Big 12, Big East, Big Ten, Pac-12 and SEC), plus a “best of the rest.” All will be complete with our analyst’s breakdown of each team, plus a projected order of finish drawn from SI’s master 1–358 rankings, to be revealed before the season’s kickoff. Next up is the Big Ten.

The Big Ten can’t run from its shaky NCAA tournament in 2021, particularly considering how much was made of how great the league was all season long. Still, a single-elimination tourney remains a less-than-ideal way of evaluating conference strength, and virtually every metric made clear that the Big Ten was the nation’s best conference in ’20–21.

On paper, the league looks slightly weaker than it did a season ago, which is understandable when you consider that perhaps the nation’s two best players in Luka Garza and Ayo Dosunmu departed. But the Big Ten is still well positioned to compete for 10 NCAA tournament bids, a lofty goal that few if any other conferences can legitimately aspire to.

There’s a case for either Cockburn or Michigan’s Hunter Dickinson, but I’ll give Cockburn the slight edge as he returns for his junior season in Champaign. Simply put, he’s unstoppable when he catches the ball in the post. Cockburn is also an excellent interior defender who has improved in space, though still has work to do in that regard. This year’s Illini offense will be built around pick-and-rolls with Cockburn and Andre Curbelo, who is one of the most creative passers in the sport. Add in plenty of spacing and Cockburn will be the centerpiece of one of the hardest-to-guard offenses in the nation.

Houstan may not have quite the same playmaking ability that Isaiah Livers did, but his ability to hit shots from beyond the arc and defend multiple positions should make him one of the best freshmen in the country in 2021–22. Houstan’s time at Montverde Academy should help him fit into the Michigan offense seamlessly after playing with a quartet of ’21 first-round draft picks in Cade Cunningham, Scottie Barnes, Moses Moody and Day’Ron Sharpe. The fifth starter on that generationally good prep team? Houstan.

Perhaps no team in the league has a wider range of potential outcomes than the Hoosiers. If things go right, IU has one of the premier players in the sport in Trayce Jackson-Davis and can surround him with a combination of experienced returners and transfers. On the other hand, Indiana has a coach that has never won a college basketball game and is new to managing 18- to 22-year-olds. The Hoosiers could finish in the top three of the conference or the bottom five, and neither outcome would stun me.

A lot of the pieces around him change, but Dickinson as a monstrous man in the middle is about as good a starting point for a college basketball roster as you can get. What made the Wolverines special in 2020–21 was Juwan Howard’s ability to get his players to buy into roles, and with SI’s No. 1 recruiting class in the country and the addition of top transfer PG DeVante’ Jones, Howard will be tested in that area again. But between Dickinson, likely high NBA choice Houstan, Jones and veteran guard Eli Brooks, this group has the combination of top-end talent and experience necessary to compete for a national championship.

There’s no doubt that the Boilermakers were ahead of schedule in 2020–21 given how many freshmen were key contributors, particularly considering the struggles other freshman-heavy teams (Duke, Kentucky) dealt with in the COVID-19-impacted season. Now, every key piece returns, and expectations are rightfully sky-high in West Lafayette. Jaden Ivey is perhaps the sport’s clearest breakout candidate thanks to his explosive scoring ability. The main question mark surrounds how Matt Painter uses his two elite bigs in Trevion Williams and Zach Edey, especially if Edey has made the jump that has been buzzed about around the program this fall.

No team’s fortunes changed more during NBA draft decisions than Illinois, when Cockburn surprisingly took his name out of the draft and briefly spent time in the transfer portal before making his return to Champaign official. For his flaws, Cockburn is perhaps the most dominant player in the sport and creates one of the game’s most dangerous 1–2 punches with sophomore point guard Curbelo, who is in for a significant jump in Year 2. The Illini also boast a deeper, more versatile roster than they did a season ago thanks to the addition of Omar Payne (Florida) and getting Austin Hutcherson healthy.

The stunning upset loss to Oral Roberts ended an otherwise outstanding season for Chris Holtmann and the Buckeyes earlier than expected. The main positive from that season was the development of E.J. Liddell, who made the jump Ohio State was hoping for and is now back for his junior season as one of the sport’s elite players. What dictates this team’s ceiling will be its new-look backcourt: Transfers Jamari Wheeler (Penn State) and Cedric Russell (Louisiana-Lafayette) fill specific needs while youngsters Meechie Johnson Jr. and Malaki Branham have tantalizing long-term upside. If Holtmann gets good guard play, this team will contend for a conference title.

Mike Woodson inherited quite the building block in Jackson-Davis, an All-American candidate who gives the Hoosiers a real chance at making noise in Woodson’s first year at the helm. The longtime NBA coach and Hoosier legend did a nice job hiring an experienced staff of assistants, who helped bring in transfers Xavier Johnson (Pittsburgh) and Miller Kopp (Northwestern) among others to solidify this veteran core with shooting and playmaking. They also signed freshman Tamar Bates, a dynamic scorer who could work his way into the rotation quickly. The Woodson experiment can’t be deemed a success or failure based on Year 1, but on paper this team looks well positioned to be much improved.

A No. 10 seed in the NCAA tournament may not jump off the page at a program with expectations as high as Maryland’s, but last year was one of Mark Turgeon’s better coaching jobs to piece things together with a weirdly assembled roster. This year’s group looks more traditional, with a true center (Georgetown’s Qudus Wahab) and point guard (Rhode Island’s Fatts Russell) in tow to join returning stars Eric Ayala and Donta Scott. That core four is, on paper, one of the better groups in the conference … especially if Russell can stay healthy. Some high-upside newcomers like Julian Reese and Ian Martinez might dictate the ceiling here.

There’s optimism in East Lansing after a messy 2020–21 marred by the lack of a true point guard and chemistry issues. The Spartans went into the portal to add Northeastern transfer Tyson Walker at point, whose ability to create offense and get into the paint was a piece missing from last season’s squad. The backcourt added more firepower with five-star guard Max Christie, a lanky wing with elite shooting ability who could be a one-and-done prospect. The main question mark is whether Tom Izzo has a truly elite player on this roster. Is Walker capable of making the jump from the CAA to upper-echelon Big Ten player? Can Christie be a go-to guy from the outset of his career? Or do the Spartans need to rely on the growth of the likes of Malik Hall and Gabe Brown for some nontraditional star power?

Steve Pikiell did what many people thought was impossible when he took the Rutgers job: Take the program to the NCAA tournament and win a game while there. So what’s his second act? Making that the norm. He has a group that can get back to that spot in 2021–22 thanks to the return of super senior Geo Baker and leading scorer Ron Harper Jr. That backcourt duo is the nucleus, and high-end glue guys Paul Mulcahy and Caleb McConnell have been through the wars in Piscataway and are excellent defensively. Getting back to the dance may depend on the frontcourt, where sophomore Cliff Omoruyi has earned high praise this fall from Pikiell. If he makes the jump Rutgers hopes he will, the Scarlet Knights could be a top-25 team.

There are more questions than answers with this Wisconsin group in the preseason given the departure of four of the team’s top five scorers from a season ago. Brad Davison is back for his tenth—er, fifth season of college basketball and provides experience, while optimism is sky-high about the future of wing Jonathan Davis after a summer spent with Team USA in Latvia. But is there enough talent here to be an NCAA tournament team? Freshman point guard Chucky Hepburn has major upside and will likely get the keys from Day One. Up front, youngsters like Steven Crowl need to step up to fill the void left by Micah Potter and Nate Reuvers.

With Luka Garza, Joe Wieskamp and CJ Fredrick all gone from last season’s historic Iowa offense, there’s no doubt the Hawkeyes will look different in 2021–22. Fran McCaffery’s plan to spark the offense includes moving Jordan Bohannon from the point to an off-ball scoring role and a larger role for sophomore Keegan Murray up front, whose versatility makes him a potential NBA prospect. If Iowa remains one of the better offenses in the U.S., it will be one of McCaffery’s best coaching jobs yet. If not, a defense that has consistently been a problem under him could keep the Hawkeyes out of the NCAA tournament.

With an older team that has lost a lot of close games over the last two seasons, Chris Collins believes he has a team that can contend for Big Dance bid in 2021–22. To do so, he’ll need more steady play from point guard Boo Buie, who at his best has the potential to be one of the Big Ten’s top guards. Buie’s prowess in ball screens and deep shooting range makes him entertaining to watch, but he has been maddeningly inconsistent in his two seasons in Evanston. If Buie reaches his ceiling, this veteran group has real upside.

Micah Shrewsberry takes the reins in Happy Valley after a successful run leading Matt Painter’s offenses at Purdue. Between what he inherited from the Pat Chambers era and what he brought in from the portal, Shrewsberry has a team that has played a lot of college basketball. On paper, six of the top seven players in the PSU rotation will be in their fourth or fifth season of college, with the lone outlier being Seth Lundy, a junior. If Shrewsberry’s pro-style offense can run efficiently with transfer point guard Jalen Pickett at the helm, perhaps the Nittany Lions could surprise in 2021–22.

Elite offenses were the hallmark of Fred Hoiberg’s teams that won big at Iowa State, but so far he has been unable to replicate that success in Lincoln after inheriting a rebuild. A beefed-up backcourt with additions like five-star Bryce McGowens, Arizona State transfer Alonzo Verge Jr. and Xavier transfer C.J. Wilcher should give the offense a boost. Is that enough for the Huskers to make a major move up the Big Ten standings? We’ll see, but this should be the best team of the Hoiberg era.

A mass talent exodus came with the firing of Richard Pitino, leaving new coach Ben Johnson with a complete rebuild. And while Johnson added plenty of volume from the transfer portal (mostly out of necessity), I’m not sure any of the transfers are true difference-makers at this level. The injury bug hasn’t helped: Forwards Parker Fox and Isaiah Ihnen are expected to miss the season after offseason knee injuries.