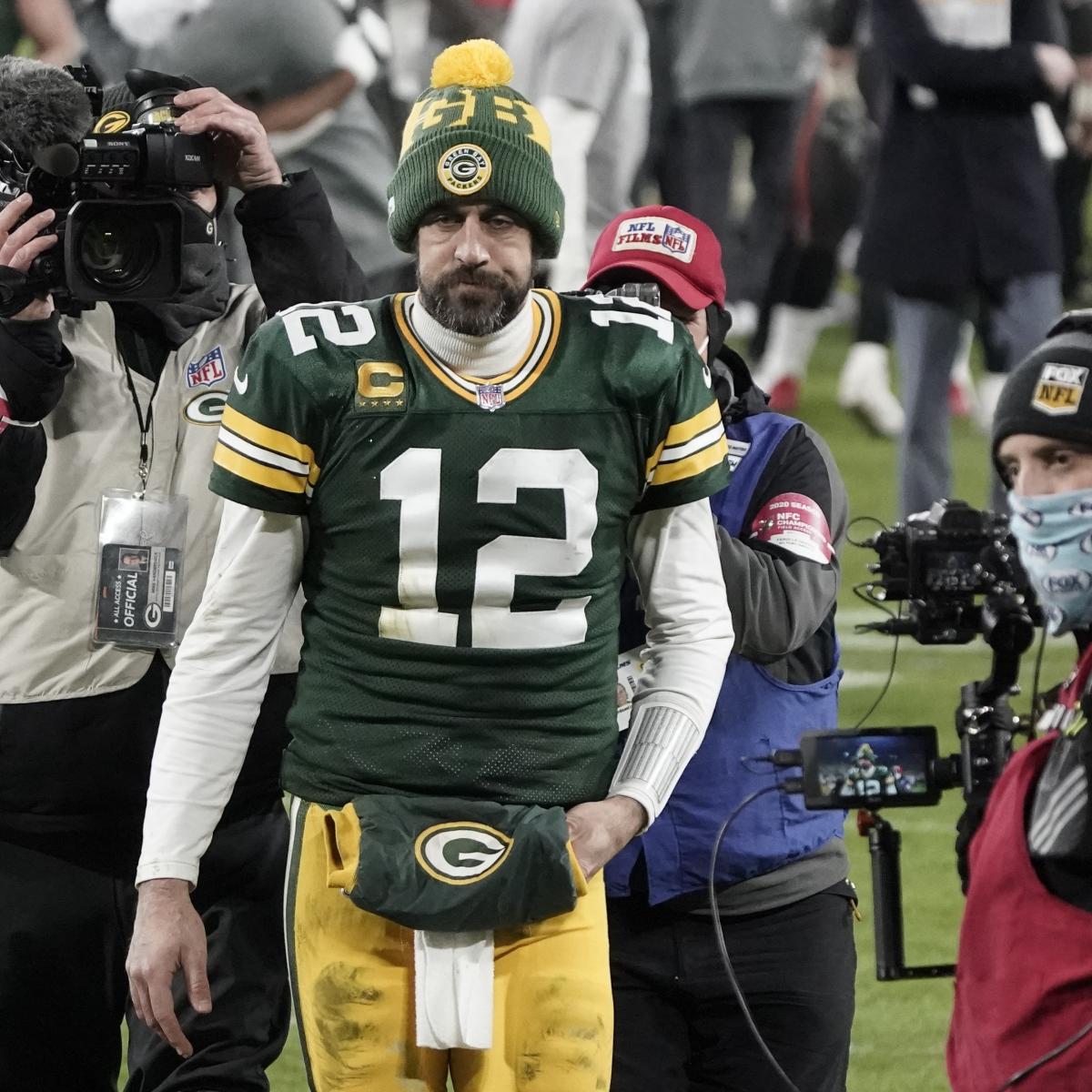 The NFL generates captivating storylines year-round. Even in the offseason, trade rumors, signings and the latest buzz around star players keep us glued to the newswire.

In addition to roster moves, teams are back on the practice field for organized team activities and mandatory minicamp this offseason, giving rookies an opportunity to leave a strong impression before training camps open in July.

As clubs finish up the spring portion of offseason activities, we’ll dive into the most notable reports on practices, transactions, holdouts and injuries across the league.

What can we glean from recent rumors and headlines?

On Tuesday, J.J. Watt tweeted a photo of himself and Chandler Jones together in uniform. That’s a frightening sight for quarterbacks. Yet the Arizona Cardinals may have to resolve a small issue in order to see that tandem wreak havoc on offensive lines.

“We’ve been in communication with both guys, we know the situations and I’ll leave that dialogue between us,” Kingsbury told reporters. “Nothing else to report on that.”

Hicks will likely suit up elsewhere as rookie linebacker Zaven Collins moves into a starting role. For now, Jones’ short-term future looks a bit murky. He’s going into the final year of his contract and coming off a shortened five-game season because of a biceps injury that required surgery.

The Cardinals have $13.5 million in cap space, so they can afford to rework Jones’ contract. However, his asking price remains a question mark. He could demand a sizable pay raise. The 31-year-old recorded at least 11 sacks for five consecutive seasons between 2015 and 2019.

Because of Watt’s recent injury history and the departure of Haason Reddick, the Cardinals’ 2020 sack leader, Arizona shouldn’t risk losing Jones over a contract dispute.

In order to counter the Los Angeles Rams, who acquired quarterback Matthew Stafford, and the Seattle Seahawks with seven-time Pro Bowler Russell Wilson within the division, the Cardinals need their best pass-rusher on the field.

The Chicago Bears don’t have a quarterback controversy yet, though Justin Fields has generated quite a buzz this offseason.

According to The MMQB’s Albert Breer, Fields’ demeanor has stood out during practice.

“The staff there has seen strong command, confidence and the quiet leadership style he carried himself with at Ohio State,” Breer wrote. “He’s also shown himself to be very self-aware and coachable—in the words of one staffer, ‘playing the rookie role very well.’ That sets Fields up nicely heading into the summer.”

Meanwhile, Andy Dalton has taken reps with the starters, and we should expect him to open the season under center unless he absolutely struggles through training camp.

However, Dalton may have a short leash as a starter if Fields puts together strong performances during the preseason. The rookie’s arm talent and mobility could force the Bears to think twice about their quarterback plan for the 2021 season.

While the Bears have some uncertainties along the offensive line, specifically at tackle with two new starters, Fields’ ability to move within the pocket gives the aerial attack a much-needed dimension if the pass protection isn’t up to par. Dalton doesn’t offer much with his legs.

The Detroit Lions could sign the top free-agent running back “sooner than later.”

Two weeks ago, the Lions hosted Todd Gurley for a visit, per ESPN’s Adam Schefter. He would reunite with quarterback Jared Goff. They played together for four seasons between 2016 and 2019, which included one run to the Super Bowl that ended in a loss to the New England Patriots.

Running backs coach Duce Staley talked about the leadership that Gurley would provide in the locker room. The six-year veteran could form a strong bond with second-year tailback D’Andre Swift, who’s also a Georgia product.

Gurley isn’t a workhorse ball-carrier at this stage of his career, but the Lions can effectively mix and match him with Swift and Jamaal Williams.

In January, head coach Dan Campbell told reporters he wanted to feature Swift in a slot receiver role, which would allow the 22-year-old to see the field on all three downs. Williams can catch out of the backfield as a threat in the short passing game. Gurley has seen a decline in targets since the 2017 campaign.

While Swift and Williams showcase their dual-threat capabilities, Gurley could become the early-down and short-yardage back who also finishes drives.

Last season with the Atlanta Falcons, Gurley averaged 3.5 yards per carry but scored nine touchdowns, eight of which were within 10 yards of the goal line.

The Lions may have to act fast on a deal with Gurley. He visited the Baltimore Ravens on Thursday, per NFL Network’s Ian Rapoport.

The Green Bay Packers’ standoff with Aaron Rodgers will probably extend into the summer.

Rodgers didn’t report to mandatory minicamp this week. The Packers have discussed pardoning him for his absence, which would drop a $93,085 fine, per ESPN’s Adam Schefter.

In the bigger picture, Rodgers remains disgruntled with the Green Bay organization, which puts the team in a bind. Yet the Packers aren’t ready to move on.

According to NFL Network’s Tom Pelissero, the Packers’ recent cap-clearing transactions, which included filing much of tight end Robert Tonyan’s $3.4 million tender as a bonus, indicate the team remains hopeful of Rodgers’ return.

Obviously, the Packers wouldn’t have to make those moves for cap relief if they seriously considered trading the 2020 league MVP, which would result in $22.9 million in cap savings.

However, Green Bay isn’t in control of this situation. Rodgers can drag this through training camp, which would put more pressure on the front office to trade him. If the Packers have to start quarterback Jordan Love, why not add pieces around him and premium draft capital?

Regardless of Love’s performance this summer, the Packers aren’t Super Bowl contenders with him under center, but they can set themselves up for the future with a strong overall roster. If Rodgers doesn’t rejoin the team by the end of the preseason, Green Bay should consider trade options.

Based on recent reports from ESPN’s Dianna Russini and NFL Network’s James Palmer, the Denver Broncos are the most likely trade suitor for Rodgers if the Packers take calls for him.

An injured veteran opens the door for a rookie who may just need an opportunity. We saw that type of scenario unfold with the Los Angeles Chargers between quarterbacks Tyrod Taylor and Justin Herbert last season.

According to NFL Network’s Ian Rapoport, New England Patriots quarterback Cam Newton hit his hand on a helmet, which resulted in a bone bruise. He’s expected to miss practice, per The Athletic’s Jeff Howe.

While Newton sits out, rookie quarterback Mac Jones could take advantage of reps with the starters and command the spotlight for the remaining OTA sessions and mandatory minicamp. He would gain some momentum going into training camp.

As the fifth quarterback off the draft board, Jones went to the Patriots at No. 15. He has athletic limitations but showed the ability to make pre-snap adjustments and pick apart defenses with great accuracy at Alabama (77.4 completion rate in his final season).

Although Newton’s injury isn’t considered serious, Jones can prove he’s capable of operating as a starter with a solid group around him. Depending on what they see in him, the Patriots may not hesitate to insert the rookie if the veteran struggles during the regular season.

The New York Jets have a well-rounded wide receiver unit.

The team signed Corey Davis, who logged career highs in receiving yards (984), yards per reception (15.1) and touchdowns (five) last year with the Tennessee Titans. If healthy, Denzel Mims could make strides in his second term. In his rookie campaign, he missed the first six games with a hamstring injury after sitting out all of training camp but averaged 15.5 yards per catch.

Jamison Crowder has led the Jets in receiving yards over the past two seasons. The club wants him to take a “significant” pay cut, per SNY’s Ralph Vacchiano, but even if he refuses to rework his contract, Gang Green may have a viable replacement in rookie second-rounder Elijah Moore.

According to The Athletic’s Connor Hughes, Moore has stood out in practices accessible to the media:

“It’s getting exhausting writing about Moore because what else is there to say? He’s making plays in the slot and split wide. He’s getting open deep and short. He’s virtually uncoverable near the goal line. Every day he does something else that makes you turn your head. … I don’t really want to write about Moore any moore (pun-y!), but it’s impossible not to. He’s been the most impressive player at OTAs (on either side of the ball) and it’s not really close.”

We shouldn’t use OTA sessions as a basis for season expectations. With that said, Moore’s early flashes will only lead to more opportunities. If Crowder doesn’t agree to redo his deal, the rookie wideout would likely slide into the primary slot receiver role.

At Ole Miss, Moore ran sharp routes, so his ability to separate isn’t a surprise. Because of that quality alone, he’s going to see the field with or without Crowder on the roster.

The Philadelphia Eagles may send Zach Ertz to a new destination in the near future.

According to Jeff McLane of the Philadelphia Inquirer, the Eagles don’t expect him to participate in their offseason program as he awaits a change of scenery. Although the three-time Pro Bowler recorded a career-low 335 receiving yards in an injury-riddled 2020 campaign, he’s still a decent commodity on the trade market.

Ertz has drawn interest from at least three teams, per ESPN’s Jeremy Fowler. Among the potential suitors, the Carolina Panthers, Tennessee Titans and Indianapolis Colts are realistic landing spots.

The Panthers have already shown an interest in bringing in competition for Ian Thomas. They signed Dan Arnold and selected Tommy Tremble in the third round of this year’s draft. Ertz is more accomplished than any tight end on Carolina’s roster. He could become a reliable safety blanket for quarterback Sam Darnold, who’s settling into a new system.

Colts quarterback Carson Wentz has a connection with Ertz from their shared time with the Eagles.

In each of Wentz’s first four seasons in Philadelphia, Ertz logged at least 74 receptions and 816 yards. The veteran tight end would also reunite with Frank Reich, his former offensive coordinator.

The Colts should pursue an upgrade over Jack Doyle, who caught just 23 passes for 251 yards and three touchdowns through 14 games last season.

Ertz to Indianapolis seems like the best fit because of his familiarity with Wentz and Reich.

The Tennessee Titans acquired Julio Jones and a 2023 sixth-round pick from the Atlanta Falcons in exchange for a 2022 second-rounder and a 2023 fourth-rounder Sunday. Even at 32 years old, he’s going to elevate quarterback Ryan Tannehill and the aerial attack.

Last season, Jones missed seven games with a hamstring injury, but he still recorded career highs in catch rate (75 percent) and receiving yards per target while averaging 85.7 yards per game.

“And based on our evaluation of him, he’s healthy and doesn’t look like he’s lost anything to us,” Robinson said.

Last season, Tennessee had the third-fewest pass attempts and ranked 23rd in yards through the air while finishing second in total carries and yards on the ground. We should see a more balanced offense in the upcoming campaign, but don’t expect fireworks right away.

Although the Titans have one of the league’s top five wide receiver duos in Jones and A.J. Brown, they did lose their second- and third-leading pass-catchers from the previous season in wideout Corey Davis and tight end Jonnu Smith via free agency.

Tennessee also has an inexperienced offensive coordinator in Todd Downing, who’s only called plays for one full term with the then-Oakland Raiders during the 2017 season. His unit ranked 23rd in scoring and 17th in yards that year.

Downing might’ve grown from his time in Oakland, but he has a lot to prove as a play-caller. The departure of former offensive coordinator Arthur Smith could become a bigger talking point if the Titans passing attack gets off to a slow start in 2021.